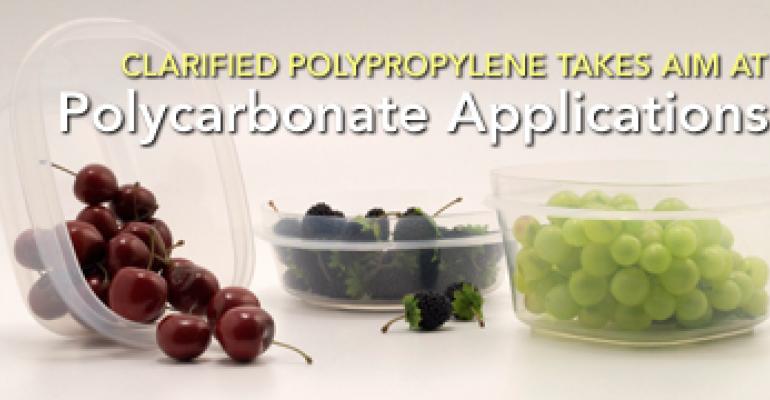 A new highly clarified polypropylene is taking dead aim at polycarbonate in applications where design engineers are concerned about potential health effects of bisphenol A (BPA) feedstock.

Home Concepts Products of Vernon, CA recently switched two containers made of polycarbonate to polypropylene clarified with Millad NX8000, a new additive that reduces haze in PP 50 percent compared to the previous industry standard. Other major food container suppliers are also in the midst of  review of possible PC replacements.

"With the high clarity imparted by Millad NX8000, we achieved the see-through visibility that's so important in food storage products. In fact, leftovers never looked so good. At the same time, we were able to address consumer concerns regarding health and safety and environmental responsibility. This initiative with Milliken also helped Home Concepts Products achieve its goal of becoming a BPA-free company in 2009," said Michael Moghavem, CEO of Home Concepts Products.

Clarified PP also saves money compared to polycarbonate, in part because it's one-third less dense than PC. Prices for injection grades of PC run around $1.70/lb versus 40 cents/lb for neat PP. The cost of clarified PP is about half the cost of polycarbonate.

Traditionally, PC has offered a more upscale look, plus rigidity and durability compared to a soft feel for PP. Publicity about possible health risks with the BPA components of polycarbonate, particularly in baby bottles, has scared many consumers away from the material. Web sites have even popped up alerting consumers to products that do and don't contain BPA.

This is Tupperware's official position on BPA: "On the strength of the repeated governmental scrutiny that polycarbonate has had, Tupperware continues to believe the material is safe. However, as Tupperware has the highest regard for the safety of the consumers of its products and the functionality of these products, it will continue to closely monitor this scientific debate and research the best materials for use in its products."

Tupperware no longer uses polycarbonate for any children's products, including baby bottles sold in the United States of Canada. Polycarbonate is still used in a small percentage of the company's products, primarily those intended for high heat resistance, as well as some serving lines. Rubbermaid also offers BPA-free and polycarbonate products.

According to Brian Burkhart, global marketing manager for Millad clarifying agent, polypropylene can withstand heat, and is even being used in baby bottles, which are often warmed in pans of water. "One of the key attributes of polypropylene is that it is hot fillable," he said in an interview with Design News. The heat deflection temperature of homopolymer PP at 66 psi is 221F. Some other clear plastics lack adequate HDT, and even wilt in a dishwasher.

There is also potential for highly clarified polypropylene in several medical applications, such as syringe barrels, petri dishes and housings for medical equipment. "Options are limited only by people's ability to make use of it," says Burkhart. "Over time, I hope people will see this as a new material and start to design around it because it really wasn't an option in the past."

One example he offers: "We had a customer at one time who told me they had a specification in their design limitations that said if a thickness was above a certain dimension (2 mm), we wouldn't use PP. When we showed them this material they got very excited and said we can change that specification to a different number now."

Another environmental factor, says Milliken's Burkhart, is the recyclability of polypropylene. "It goes right in with the other polyolefins in many towns," he says. Many automotive engineers are also moving to polyolefins for car interiors to improve their recyclability. Olefins such as milk bottles and PP containers have similar densities and are removed through recycling streams with the same process.