HomeMaterialsChemically Active 3D-Printed Structures Are Successfully Demonstrated
Recent
Materials
Argo AI Expands to Austin and Miami in Search of More Challenges
May 18, 2022
12 Ideas that Could Change the World
May 18, 2022
Making the AC Power Main Intelligent
May 18, 2022
How to Make Sure Your Digital Transformation Doesn’t Fail
May 18, 2022
POLL
The Internet's Grooviest Slideshow of Legendary International Scouts
May 17, 2022
Electronics Industry Bolsters Root of Trust Security Efforts
May 17, 2022
3 Tips for Embedded Software Configuration Management
May 17, 2022
Novel 3D Printing Method Used to Replenish Coral Reefs
May 16, 2022

Researchers at American University have produced chemically active structures that, not unlike living things, can actually do things on their own without an external power.

It would appear that 3D printing has the potential to change everything. Scientists in Russia have already produced 3D printed ”organ constructs” that have been successfully transplanted into mice. Now, researchers at American University have produced chemically active structures that, not unlike living things, can actually do things on their own without an external power.

These structures are not simple toys either. In fact, they do something quite useful -- they remove pollution from water and air. Not only that, but these structures were produced using common materials so that you can, in fact, try this at home, if you’d like.

The structures, about the size of a kitchen sponge, are printed from ABS filaments, the same type that home hobbyists use, with the addition of chemically active Titanium dioxide (TiO2) nanoparticles dispersed throughout a sponge-like matrix. 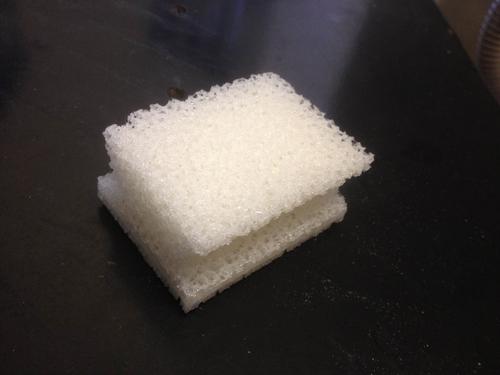 Titanium dioxide has been shown to have an ability to fight pollution and is being tested in projects like photocatalytic pavement in the Netherlands. After a year of testing, the treated pavement was found to reduce air pollution on that particular street by anywhere from 19% to 45%. TiO2 deposited on thin films has also been shown to be effective for photocatalytic remediation.

The way it works is that pollutants, which are generally complex hydro-carbons, break down into safer, smaller molecules when exposed to TiO2 in the presence of light.

The team at American University, led by Assistant Professor Dr. Matthew Hartings, tested the material by placing it in water containing an organic tracer dye called rhodamine 6G in low concentrations that would be typical of a pollutant. In an email, Hartings described the chemical as having “a similar structure as other pollutants that we might care about (pharmaceutical waste, endocrine disrupters, and waste from textile manufacturing).” In all cases the pollutant was destroyed as measured by the reduction of the intrinsic fluorescence of the rhodamine, which indicates that it was broken down into smaller molecules.

Said Hartings, “It's not just pollution, but there are all sorts of other chemical processes that people may be interested in. There are a variety of nanoparticles one could add to a polymer to print."

One of the things the team attempted to find out was whether the photo-reactive behavior of the titanium dioxide would persist through the 3D-printing process. The answer was a resounding yes. They also learned that reducing printing speed from 30 mm/sec to 10 mm/sec produced a better quality structure.

Your Plant. Smarter. Get informed on factory retrofitting, converging OT & IT, mastering cyber-physical transformation, predictive maintenance, 3DP in the factory, designing for maximum ROI and more in Industry 4.0: The Building Blocks of a Well-Oiled Smart Plant at Design & Manufacturing. Sept. 21-22, 2016 in Minneapolis. Register here for the event, hosted by Design News’ parent company UBM.

While higher concentrations of TiO2 produced a higher rate of deterioration of the pollutant, the researchers found that a maximum of 10% TiO2 by weight could be effectively inserted into the plastic in this manner. Higher concentrations tended to structurally weaken the polymer substrate.

Based on these promising results, further studies will involve going beyond the simple “dog bone” shape used in these tests, to see if other geometries will perform more effectively. Evidence suggests that providing a higher surface area to volume ratio could perform better.

What will come next is anyone’s guess. What other nanoparticles might be added to 3D-printed substrates to produce heretofore unheard of functionality? Only time will tell.