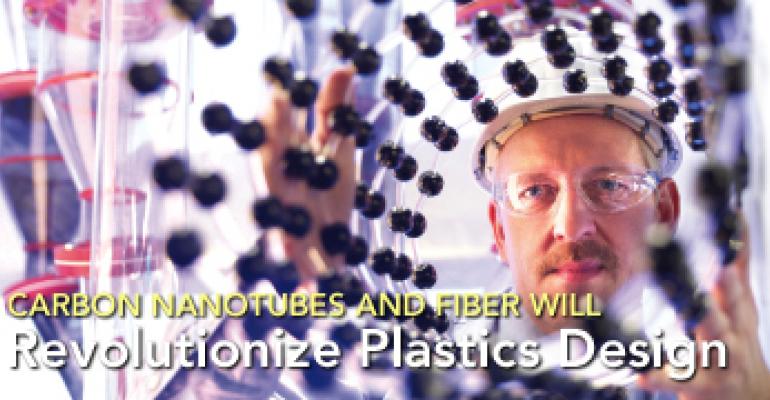 New applications highlighting stiffness and electrical properties will be on display at the International Plastics Design Competition at the National Plastics Exposition June 22-26 in Chicago.

Sponsored by Design News, the first-ever design competition at the NPE drew 41 entries in categories ranging from appliance and automotive to medical and bioprocessing.

One of the biggest game-changers over the next five years in plastic component design will be the industrial-scale arrival of carbon nanotubes as multi-purpose compound enhancers.

Carbon nanotubes (CNTs) are one-fifth as dense as steel and some 30 times stronger, making them an excellent reinforcement. They create compounds with very low densities, and Young's modulus (stiffness) superior to carbon fibers. They also exhibit unique electrical properties, and are efficient conductors of heat - two notable weaknesses of neat plastics.

One of the first applications is a fuel filter produced by Bosch for the Audi A4 and A5. Made from Ultraform N2320 C polyacetal reinforced with CNTs, the filter has a high level of electric conductivity without much of a decrease in toughness.

The Society of Automotive Engineers (SAE) recommends a maximum specific volume resistance of 106 O-cm for materials that will be used in fuel-carrying components. The new carbon nanotube compound has a value of just 30 O-cm, making it 30,000 times more conductive than required by SAE standard J1645. This eliminates the risk of sparking as fuel flows through the filter.

Until now, multiwall carbon nanotubes have only been available on pilot scale and have been extremely pricey. But several major players are building commercial levels of capacity and bringing prices down significantly.

"There will be three important applications for multiwall carbon nanotubes," says Page McAndrew, senior research scientist at Arkema, one of the leading developers of the new reinforcement technology. "One is imparting electrical conductivity, primarily for ESD applications. Two is for improving mechanical performance and three is for flame retardancy."

Prices have dropped to a range of $30 to $70 per pound and probably will drop lower as companies jockey for market position. Considering that loadings in many applications are only 1 to 3 percent, the economics of multiwall carbon nanotubes are becoming attractive. Nanocyl offers compounded grades for various plastic masterbatches, including polycarbonate, nylon, polyesters, polypropylene and polyethylene. PLASTICYL compounds typically contain 15 to 20 percent carbon nanotubes.

Carbon nanotubes will be competing with carbon black for automotive fuel applications, one of the key target areas for the new material. Loadings of 10 to 20 percent of carbon black are often needed to meet electrical static discharge standards. That much carbon black can adversely affect the mechanical properties of a plastic compound, particularly impact resistance or permeability.

"You can preserve those properties if you use carbon nanotubes instead because you can get the same ESD performance at loadings of just 1 to 2 percent," says McAndrew.

Learn about carbon nanotube developments at the BASF booth W127020.

New developments in carbon fiber compounds will also be in evidence at the NPE, most likely at the design display in the new West Hall of McCormick Place in Chicago.

Parts entered into the design competition by Plasan Carbon Composites, such as air splitters and rear wings for pricey cars like the Viper, are not indicative of what's coming in carbon fiber composite applications.

"The target of our research is to take us from 7,000 vehicle sets a year to 50,000 or 60,000 a year," says Gary Lownsdale, engineering manager for Plasan Carbon Composites of Bennington, VT. The company, this year, opened a new R&D center aimed at significant improvements in both process and materials technology.

"We're getting down and really trying to understand what happens in the curing process so that individual resins can be tailored for the process," says Lownsdale. The goals are to boost productivity, a chronic problem, for any type of thermoset curing process, and to improve surface quality. The Plasan unit is the global leader in Class A surface carbon fiber parts.

Lownsdale says Plasan is trying to develop a new process that could make carbon fiber composites for automotive with thermoplastic resins. That would be an industry first, and require a new low-pressure process technology. Injection molding would not work. Composites are loaded with more than 50 percent levels of carbon fiber and their exact orientation is critical.

One of the big areas of development is in computer simulation. "We've found you can't go to one place and buy an off-the-shelf design guide for carbon components," says Lownsdale. "All of the pieces are out there. It's just that they haven't been pulled together and put in one place." Plasan is working with other companies actively developing carbon fiber composites, including those that make aircraft and wind turbine components.

The money for Plasan's development is coming from its parent company, also named Plasan, in Israel, which produces military components made of carbon fiber.

A special grade of carbon fiber is made for automotive applications. For one, the resins are faster curing, allowing higher throughputs. "Also, you have to pay attention to dynamic conditions, as well as crush and energy absorption," says Lownsdale. "Often in aerospace, they're happy if they can do two parts a day. We need to do 200 sets a week."

Of course, you'll have to look a bit to find the most spectacular new engineering innovations for plastics applications at the National Plastics Exposition. It's a show dominated by the producers of primary and secondary machinery, and you'll be overwhelmed by displays of granulators, dryers and resin handling gear.

But there will be plenty of important plastics technology there from major players such as DuPont, Dow, Eastman, BASF, Sabic Innovative Plastics and PolyOne. And as Design News has reported, bioplastics will be an interesting area of emphasis at this year's show.