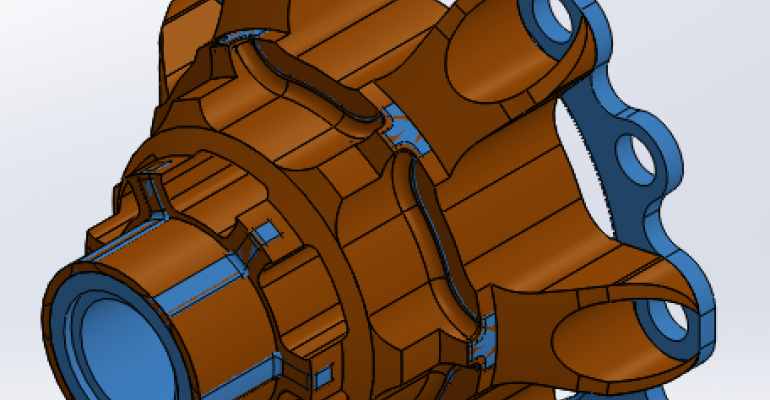 In a new twist on automotive lightweighting, engineers from Eaton Corp. are combining steel with carbon fiber reinforced thermoplastics to cut weight in high-load, high-volume powertrain applications, such as differential housings and transmission gear sets.

Eaton engineers say the new approach not only allows them to handle the high torque loads of those components, it enables them to do it in a way that’s economically palatable for automakers.

“Typically, when we talk about metal replacement in vehicles, we’re looking at lower-load, thermoplastic parts, like under-hood parts that use nylon,” noted Kelly Williams, research and technology manager for polymers and nanocomposites at Eaton Corporate Research. “But higher-load, harsher-environment applications like this haven’t been done. This is a new approach, as far as we know.”

Williams said that the automotive supplier is working with at least two automakers on replacement of cast iron differential housings with hybrid parts made from steel and carbon fiber reinforced plastic (CFRP). The hybrid housing, which is subjected to torques as high as 4,000 lb-ft, uses a steel frame to carry the higher loads and employs the CFRP to carry medium-level loads. Even with its equivalent load-carrying capacity, it weighs about 40% less than the cast iron version, Williams said.

“In terms of strength and stiffness, this approach can be comparable to cast iron,” Williams told Design News. “Carbon fiber alone is not as stiff as steel -- its modulus is not as high as steel -- so that’s why we use both materials.” Carbon fiber composites have a specific modulus of 14 GPa cc/g, versus 25 GPa cc/g for steel, she added.

To be sure, CFRP has been used previously in vehicles and in aerospace applications, but generally not for high-load, high-volume parts, largely due to manufacturing cost constraints. Eaton was able to reduce costs, however, by combining the steel frame with the overmolded composite, enabling the creation of a quick, net-shape parts that need little secondary finishing. As a result, cycle times are shorter, making it less costly and more suitable for high-volume manufacturing.

“We could make the whole thing out of continuous carbon fiber, but we would be paying aerospace prices, and that’s not going to work for the high volumes of the auto industry,” Williams said. “So we are trying to balance the need for lightweighting with cost. Instead of doing a 100% composite, we can do a part-steel, part-composite. Then we can tweak the numbers until we’re in the cost range for the customer.”

In addition to its work on differential housings, Eaton is investigating the use of the steel-carbon fiber approach in gears for transmissions, as well as housings and rotors for automotive superchargers.

The hybrid solution is still more costly than cast iron, Williams said, but the auto industry’s growing emphasis on fuel efficiency is causing automakers to rethink the economic equation. “This has become an attractive solution given the current push for lightweighting,” Williams said.