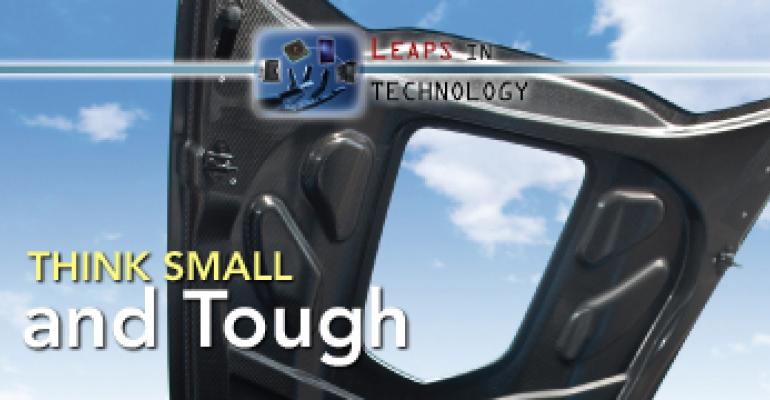 Significant advances in materials' and assembly technology will take place in the next five years as engineers push harder to reduce weight, miniaturize and improve component performance.

One of the biggest pushes will be the use of carbon-fiber reinforced plastics (CFRP) in automotive applications after their spectacular success in revolutionizing airplane design. Three CFRP assemblies were finalists in the 2008 Society of Plastics Engineers' Innovation Awards, announced Nov. 20 in Detroit, showing the potential for the novel, but expensive, material.

Lownsdale says the potential for carbon composites in cars is "tremendous" despite its high cost, several times the cost of competitive processes. One reason is low-cost tooling. One million dollars in tool costs were avoided, for example, in the Corvette hood assembly compared to tooling required for sheet molding compound. "We were able to mold carbon fiber in one tool operation due to the inherent strength and bending stiffness of carbon fiber," says Lownsdale.

One interesting aspect of carbon fiber automotive developments is the high degree of supply chain collaboration required, partly because of the newness of the technology. Developments required for the Viper application, for example, included:

For other applications, Ashland developed high-strength, high-temperature and fast-curing adhesives for bonding.

Another emerging materials' technology that will significantly impact design engineering is the development of super-strong materials on a nano scale.

Florida State University expects to spin off a company this year that will attempt to commercialize a breakthrough using carbon nanotubes. Scientists there feel they have developed a new technology that will allow commercial production of sheets that are 50 to 100 percent loaded with carbon nanotubes. To date, carbon nanotubes are only used in loadings of 2 to 3 percent in plastics because they tend to tangle and clump in high loadings.

Professor Ben Wang told Design News when he exposes the tubes to high magnetism they line up in the same direction like soldiers in a drill. He says he also creates some roughness on the surface so the nanutubes can bond to a matrix material, such as epoxy. The nanotubes can, in effect, take the place of carbon fiber in a composite construction - only the results are much more stunning.

You can make extremely thin sheets with the nanotubes - leading to use of the term "buckypaper." The name "Bucky" comes from Buckminster Fuller who envisioned shapes now called Fullerenes. Stack up hundreds of sheets of the "paper" and you have a composite material 10 times lighter but 500 times stronger than a similar-sized piece of carbon steel sheet. Lockheed Martin is one of the companies very interested. Unlike CFRP, carbon nanotubes conduct electricity like copper or silicon and disperse heat in the same manner as steel or brass.

Nanoclays are already in commercial use and show, in a small way, some of the potential of nano sizes because of their very high surface area to weight ratio.

Navistar is replacing glass microspheres in truck hoods with nanoclay fillers, reducing weight by 21 lb, or by 20 percent of its original weight. "The weight savings translates to $2 million per year in greater revenue productivity," says Edward Zenk, senior development engineer at Navistar's International Trucks and Engine group in Warrenville, IL. "Twenty-one more bulk products can be loaded per truck per trip without exceeding over-the-road limits."

"To reduce weight, we had to take out inorganic fillers," says Helena Twardowska, a senior staff scientist at Ashland Inc. in Dublin, OH. Nanoclays are a very efficient filler, due to their large surface area of 740 m2/g, allowing filler ratios to drop from a range of 150 to 200 parts by weight to 25 to 50 parts by weight.

The nanoclays have additional favorable properties, including improved flexural modulus and surface smoothness. At high temperatures, modulus of the materials increases by 20 percent. Glass microspheres, often the previous material of choice for low-mass SMC, can create a surface that is difficult to paint after sanding.

The raw material cost of low-mass SMC is about 15 percent higher than standard SMC, which has a specific gravity of 1.9. For comparison, aluminum could produce the same-sized part at a slightly higher weight savings (26 versus 21 lb) but would cost more than double what standard SMC costs.

"The most common misconception about micromolding is that it is like macro molding," says Donna Bibber, CEO, Micro Engineering Solutions, Charlton City, MA. "It isn't. It's very different." Designs are different and tools are different as are processes and measuring protocols. "You can't make it if you can't measure it," says Bibber. "You have to be able to validate that the part you get out of the mold is correct."

Medical devices are one example of components that are becoming much smaller. David Danitz, vice president of research at Novare Surgical Systems, said he couldn't find a supplier to make a micro part he designed for a new laparoscopic surgical instrument. The most difficult aspect of making a micro part, in general, says Bibber, is making a tool that can last. "You are 85 percent of the way there if you have a good tool," she says.