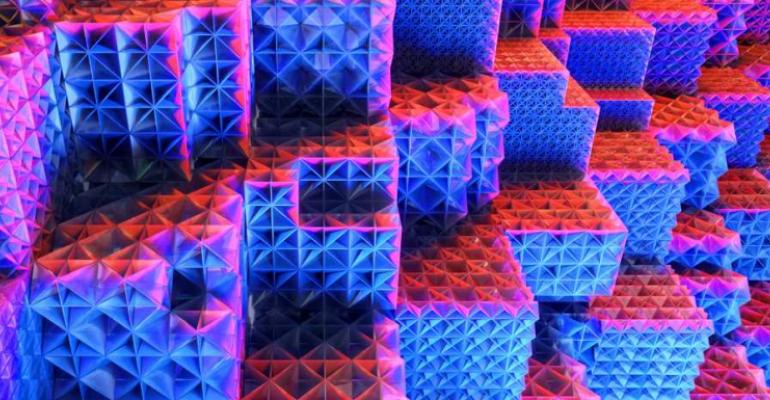 New materials that take advantage of a new interior structure could be the way forward for new lightweight, strong materials for myriad uses.

Researchers in Switzerland have developed materials that they believe are the stiffest porous-lightweight materials to date, paving way for new uses in automobiles, construction, and medical implants.

A team at ETH Zurich in Switzerland has used 3D printing to create a family of new architectures that maximize the stiffness of porous lightweight materials, resulting in materials that are the stiffest they believe have been invented so far but that also have equal strength in all three dimensions, they said in an ETH news release.

The Lattice Is the Key to the Design

Key to the design of the materials is the use of what are called plate lattices rather than trusses, said Dirk Mohr, professor of computational modeling of materials in manufacturing at ETH. He said this type of structure offers a number of benefits over trusses, which have traditionally been used in forms such as posts and rafters.

“The truss principle is very old; it has long been used for half-timbered houses, steel bridges and steel towers, such as the Eiffel Tower,” he explained. “We can see through truss lattices, so they are often perceived as ideal lightweight structures.”

However, researchers used a combination of computer calculations, theory, and experimental measurements to develop a new family of plate-lattice structures that are up to three times stiffer than truss-lattices of the same weight and volume, he said. Moreover, it’s not only their stiffness—or resistance to elastic deformation—that approaches theoretical maximum values for such a characteristic, he said. The strength or resistance to irreversible deformation also does, too.

In other words, the structures Mohr and his team have developed show that at this point, it’s practically impossible to develop other material structures that are stiffer for the given weight, he explained.

Imagining two cubes with very thin outside walls can help illustrate why plate-lattices have advantages over truss-lattices for myriad applications, researchers said. Both cubes—identical in material volume and thus interior-structure weight—have struts inside to prevent the cubes being compressed when external pressure is applied, but one uses trusses while the other uses plates.

If a force is applied to the truss structure from above, one of three struts would carry the force, with the other two not contributing to the stability at all unless a force comes from another direction. If, in contrast, force is applied to the plate lattice from above, two of the three plates contribute to its stability, making much better and more efficient use of the internal struts. Researchers published a paper on their work in the journal Advanced Materials.

At Almost All Scales

The team first developed the lattices using a computer to calculate their processes, and then produced them at the micrometer scale out of plastic using 3D printing. Mohr stressed, however, that the advantages of this design are applicable for all constituent materials and also at sizes from nanometers to the largest scales being used in design today, he said.

However, modern fabrication methods do need to catch up before researchers will see their work in myriad practical applications—from medical implants to laptop casings to lightweight vehicle structures—in which the amount of material needed also would be reduced, driving down costs, Mohr added.

“If these kinds of lattices were to be additively manufactured from stainless steel today, they would cost as much per gram as silver,” he said. “But the breakthrough will come when additive-manufacturing technologies are ready for mass production. When the time is right, as soon as lightweight materials are being manufactured on a large scale, these periodic plate lattices will be the design of choice.”