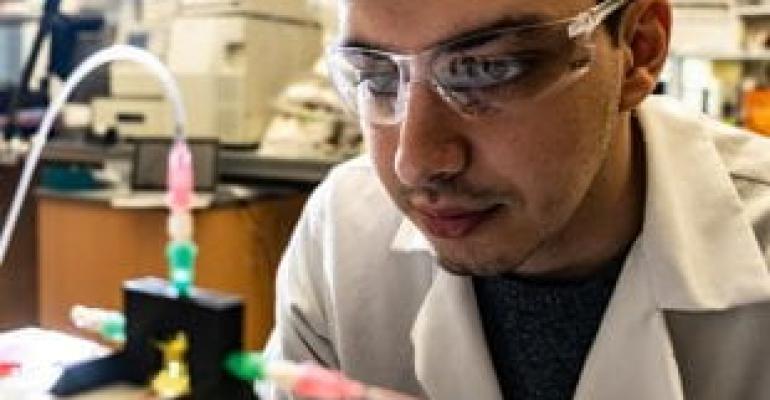 A new bioprinting method for artificial vascular networks could one day lead to on-demand supply of 3D-printed artificial organs.

Imagine a world where a patient in need of a liver transplant could immediately receive a bio-printed liver without having the agonizing wait of months or years for a donor organ to become available.

This is the promise of technology from a team at Rice University, which has developed a new technique for bioprinting tissues that reproduces—with the most complexity so far—vascular networks for the human body.

Vascular networks are the body’s natural passageways for vital fluids like blood and lymphatic fluids. Though researchers already have developed a way to fabricate synthetic capillary networks for artificial organs, vascular networks have been a challenge to synthesize, said Jordan Miller, assistant professor of bioengineering at Rice University.

“One of the biggest road blocks to generating functional tissue replacements has been our inability to print the complex vasculature that can supply nutrients to densely populated tissues,” he said. “Further, our organs actually contain independent vascular networks—like the airways and blood vessels of the lung or the bile ducts and blood vessels in the liver. These interpenetrating networks are physically and biochemically entangled, and the architecture itself is intimately related to tissue function.”

Miller and his team have now developed the first bioprinting technology that addresses this challenge of multivascularization in the most “direct and comprehensive way” to date, he said.

Specifically, what researchers invented is a new open-source bioprinting technology they called “stereolithography apparatus for tissue engineering,” or SLATE. The system uses a layer-by-layer approach to make soft hydrogels, printing them from a liquid pre-hydrogel solution that becomes a solid when exposed to blue light.

In the process, a digital light processing projector shines light from below, which displays sequential 2D slices of the structure at high resolution, researchers said. As each layer solidifies, an overhead arm raises the growing 3D gel just enough to expose liquid to the next image from the projector.

Bagrat Grigoryan, a Rice graduate student, came up with a key aspect of the technology—the addition of food dyes that absorb blue light, confining the solidification to a very fine layer. This enables the production of soft, water-based, biocompatible gels with complex architectures in mere minutes, researchers said.

The team used the technique to create a proof-of principle in the form of a hydrogel model of a lung-mimicking air sac, in which airways deliver oxygen to surrounding blood vessels. Researchers also implant bioprinted constructs containing liver cells into mice to test their work.

In experiments involving the lung-mimicking structure, researchers demonstrated that the tissues were durable enough to avoid rupture during blood flow and pulsatile “breathing,” which simulated the pressures and frequencies of human breathing.

Tests also found that red blood cells could take up oxygen as they flowed through a network of blood vessels surrounding the “breathing” air sac similarly to the gas exchange that occurs in the lung’s alveolar air sacs, researchers said. The team published a paper on its work in the journal Science.

Researchers hope their invention will help propel the development of artificial organs that can replace human organs used in transplant surgeries, as there are far more people waiting for transplants than organs currently available, they said.

“We envision bioprinting becoming a major component of medicine within the next two decades,” Miller said. Indeed, an on-demand supply of functional organs could eliminate the need for a transplant list and be used to treat millions of patients worldwide, he said.

Miller and Grigoryan have launched a Houston-based startup called Volumetric to commercialize key aspects of the research. The company is currently designing and manufacturing bioprinters and bioinks.