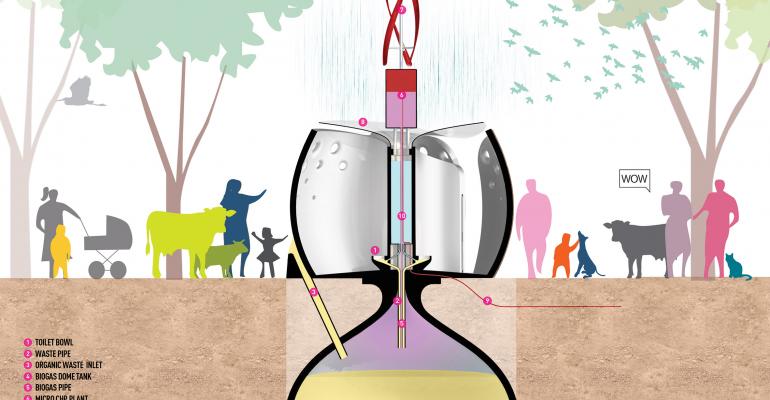 To combat open defecation in India, Spark Architects has introduced the “Big Arse Toilet” Concept, a mobile structure that converts waste into bio-gas.

One of the many things the developed world takes for granted is the toilet. It doesn't matter if it’s indoor or outdoor; shared or private; chemical, water-flushing, portable, or just a deep pit in the ground; or simple or glamorous. It’s a critical piece of equipment for public health and sanitation, as it disposes of human waste properly and reduces the risk of bacterial illness that increases mortality.

Globally, about 892 million people, or 12 percent of the Earth’s population, engage in open defecation (using ditches, fields, woods, rivers, or even streets)—often because they lack access to toilets. Open defecation rates are highest in India, where it’s estimated that 40 percent of the population either lacks access to toilets or does not use them because of cultural practices.

Ending the practice of open defecation is one of the world’s top sustainable development goals for reducing poverty and mortality. Various projects have been attempted, with mixed levels of success. In some cases, toilet facilities have been installed in communities in Asia and Africa, but a lack of planning for cleaning and care of the facilities has led to them becoming unusable or even a security risk.

Now, Singapore-based Spark Architects has a new idea: functional toilets that use human waste to generate electricity. The concept, called the “Big Arse Toilet,” is a 13-meter, partially 3D-printed structure that converts human and animal waste into biogas. (The company’s slogan for the project is, “SPARK gives a sh*t.”) In theory, the completed toilet system could be flown into remote locations using a six-rotor drone.

The idea of converting human waste into electricity isn’t a new one, but doing it on-site in a rural village is compelling. According to SPARK, each Big Arse Toilet could generate enough electricity for eight rural dwellings in a small village.

It works like this: Human waste goes directly into the anaerobic digester. Food scraps, animal waste, and other organic waste are fed manually into the digester. Eventually, decomposition of the organic material produces methane, which is stored under a relative amount of pressure in an underground bio-gas chamber. The bio-gas is fed to the unit’s micro combined heat and power (CHP) plant to create electricity or provide gas for cooking and lighting.

The original design created by the company involved bamboo fibers, which are plentiful in India, mixed with bio-polymer resin to create the bio-gas dome. The company has now resolved to find another way, as 3D printing bamboo fibers is proving to be challenging with current additive manufacturing equipment.

“We have not used this material and are encountering resistance from large-scale printers not wanting to use anything but the standard printing plastics and nylons. This is a little disappointing,” Stephen Pimbley, director of Spark Architects, told Design News. “We chose the material given India’s natural bamboo resource and the Indian government’s desire to find new, inventive ways of using the bamboo raw material.”

Ultimately, the goal is to be able to customize the toilet systems based on their surroundings by taking advantage of local flora and using lightweight materials, compared to heavy and difficult-to-transport materials such as concrete.

“The printed shell forms a lath onto which different types of materials can be applied, such as mud, timber, or a green growing surface,” Pimbley said. “The intent is to provide the toilet with a level of ‘contextualism’ either via fabrication using local materials or as an organic substrate for plant/vegetable growth.”

In the future, the concept may move forward without the use of 3D printing—instead, finding a way of using existing materials that are plentiful in India. “Having talked to many printers, we have come to the conclusion that perhaps [3D] printing is not the way forward,” said Pimbley. “We are investigating injection molding or pressed panels using either bamboo pulp or recycled Tetra packs, since billions of Tetra packs are discarded into landfills in India every year.”

While a micro CHP plant is ideal for producing electricity in a rural setting using the bio-gas, Pimbley told Design News that it makes the system more expensive and complicated and requires maintenance. Spark is currently looking at alternatives to CHP generation to make the toilet system more self-sustaining and cost-effective to produce.

“We are value-engineering the design currently—determining printing costs versus a molded, pressed, or injection-molded system,” Pimbley said. “The more that are produced, the lower the unit cost. The high up-front costs are in tooling and mold fabrication.”

SPARK is currently seeking funding to further its design for the Big Arse Toilet. Previous sustainable development research projects led by the company have included beach huts made from recycled ocean plastic and a home farm that combines market gardening with aged care living. Both of these projects were recognized with innovation awards by the World Architecture Festival.