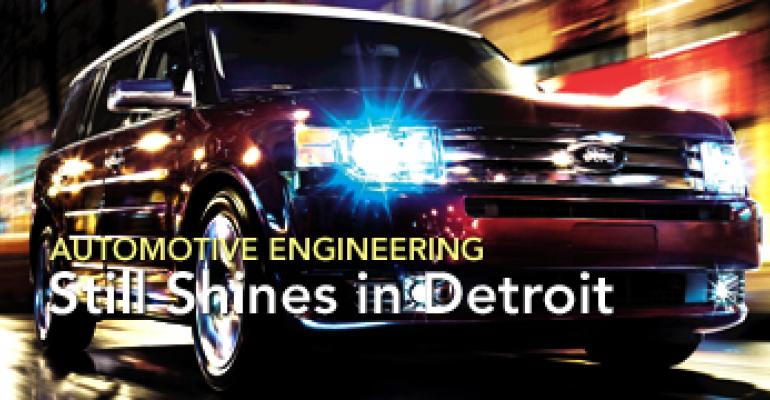 Don't blame American automotive problems on engineers. There's an explosion of new plastics' designs, many of which are the best in the world.
The new crossover Ford Flex is loaded with engineering innovations. Eight were awarded finalist status in the 2008 Society of Plastics Engineers Automotive Div. design competition, held in Detroit in November. One example is the use of high-gloss black acrylic appliques that feature Ford's industry-first keypad, which is invisible until touched. "The appliques are the enabler for the Flex's unique floating roof design," says Paul Dellock, a design engineer at Ford. The appearance of a "floating" or unattached roof is an effect created by blacking out the roof pillars combined with dark windows. A conventional keypad would have ruined the look.
Arkema developed a unique acrylic for the application that has a high surface hardness, good impact properties and good temperature properties. Ford engineers also wanted a recyclable material and ruled out painted coatings that emit volatile organic compounds.
Windsor Mold, a Canadian tool builder, developed a thin-wall, two-shot molding technology that included robotic glue sealing. Highly polished mold surfaces create a mirror-like finish with ding resistance superior to metal appliques, according to Dellock.
"Prior-generation high-gloss black appliques were either painted steel or painted aluminum and are not capable of providing the semi-transparent features required for the hidden keypad," says Dellock. The plastic appliques save about $25 for the 10 pillars on the Flex. Tooling costs were more than $1 million less than the progressive stamping dies used for painted steel. Also, no paint racks were required. The plastic appliques weigh 5 lb less than the painted steel used on the Ford Edge and Lincoln MKX.
Headliner Integration
Another engineering tour de force on the Ford Flex is a system that integrates the auxiliary air conditioning duct, headliner stiffener, headliner attachment base, moon roof opening stiffening rings and the dual sun shade carrier.
"Our challenge was to make the subsystem using a single injection-molded part, with one plastic resin, to reduce complexity, improve dimensional integrity, reduce engineering time and achieve significant cost savings through innovation," says Joe Callahan, program manager at Dakkota, the system supplier of the component.
In the integrated structure, a hodgepodge of materials (stamped metal, glass mat laminate and polypropylene) are replaced with one material - a polycarbonate/ABS blend. The supply chain was significantly smaller: One molder, H.S. Die, was responsible for the integrated duct. Component complexity was reduced from 22 to 15 and weight was cut by 1 lb. Savings per part total $13.41 and there was a significant capital savings on tool costs, which are reduced $2.45 million. A special high-strength melt adhesive with nitrogen-assisted spray was developed to attach the large integrated part to the headliner substrate.
Other Flex Innovations Include:

- A plastic capless refueling system with a sensor that only allows the proper fuel to be dispensed. The system uses a conductive plastic ground path to prevent electrostatic discharge. Ford plans to start using the capless system on all vehicles. Martinrea has applied for patent protection on the technology.

- A 20 percent glass-filled polypropylene is used on the overhead console of the Flex to provide high heat-deflection properties. The original console made of talc-filled thermoplastic olefin sagged after exposure to heat.

- A modular floor console using an all-plastic structural framework to support a floor shifter and eliminate a steel shifter bracket.

LEDs Advance
Energy-saving light-emitting diodes (LEDs) will become increasingly important in cars as electric designs ramp-up. The biggest reason: they use less electricity. New designs now make it possible for LED lamps to replace gas discharge lamps.
Fans optimized to the special needs of automotive headlamps deliver the required air flow for active cooling In the development of the fans for these new headlamp units, fan specialist ebm-pabst from St. Georgen, Germany, consulted the experts at DSM Engineering Plastics to identify suitable materials with optimized outgassing properties. The collaboration resulted in a completely new cooling air supply concept, molded in DSM's newly developed PET XL, which exhibits extremely low outgassing.
"It made sure that the optimum play of the rotor and stator will not be compromised even by high temperature fluctuation, by hardest impact when driving or by humidity," says Thomas Pusch, an engineer for DSM Engineering Plastics.
Blow-Molded Tank
In another innovation, Inergy Automotive Systems of Adrian, MI developed a twin-sheet blow molding system (TSBM) that integrates components into a fuel tank during blow molding, reducing costs and emissions at the same time.
"This technology is the gateway to the next generation of plastic fuel systems, allowing much more complex fuel systems that met the strictest of performance and emissions standards," says Dave Hill, project engineer at Inergy Automotive. Sheets extrude between a central core and a mold. Core actions attach the components during initial sheet forming. The empty core is withdrawn and the mold is closed to join the formed sheets in a second blowing step. Components that can be attached to the core include baffles, gauges, valves, jet pumps, lines, fuel modules and canisters.
TSBM replaces co-extrusion blow molding, which requires boring and welding of externally mounted components. "Weight savings are up to 10 percent compared to conventional blow molding," says Hill. "The Twin-Sheet Blow Molding process allows improved wall thickness control." There's an additional 10 percent savings through component simplification and reduction in finishing costs.
"More internal components mean fewer potential fuel leak paths," adds Hill. "Increased design flexibility provides increased tank capacity and driving range." Placing baffles within the tank also reduces noise.
Possibly most significantly, the internal placement of components also reduces emissions. "Permeation of the fuel system can be dramatically reduced compared to current tank systems at the same or lower cost," says Hill. "The technology can meet all global evaporative emission standards."
The most important standard right now is in California, which is requiring vehicles to reduce their fuel emission by a factor of 10, to fewer than 54 mg per vehicle per day.
The key to the technology is the in-mold assembly. "We designed the tool so that it can be used with conventional blow-molding machines," says Hill. Components are integrated using one of two innovative technologies. Internal welding is used for small components and internal riveting is used for larger components. Parts up to 1 kg can be inserted into the parison. The process also allows attachment of non-compatible materials, such as polyacteal to polyethylene.
Weight Reduction
Navistar is using nanoclay fillers and other advanced materials in truck hoods in place of glass microspheres to reduce weight by 21 lb, or by 20 percent of its original weight.
"The weight savings translates to $2 million per year in greater revenue productivity," says Edward Zenk, senior development engineer at Navistar's International Trucks and Engine group in Warrenville, IL. "Twenty one more bulk products can be loaded per truck per trip without exceeding over-the-road limits."