This AI Can Select Materials for Design Engineers 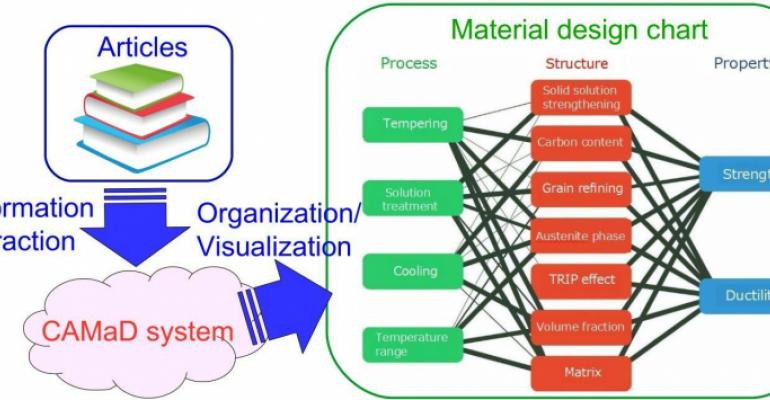 Researchers at the National Institute for Materials Science have developed an AI to assist engineers in materials design and selection.

Whether it's graphene for its astounding array of functional properties, hemp for its inherent sustainability, or any of numerous other choices, keeping up with the seemingly countless numbers of new materials entering the market has become a daunting task for engineers.

A group of researchers at the National Institute for Materials Science (NIMS) in Tsukuba, Japan are looking at artificial intelligence as a solution to guide scientists and engineers through this process. They have developed a Computer-Aided Material Design (CAMaD) system that creates visualizations of the relationships between the materials, their structures, and the resulting properties.

The system accomplishes this by essentially “reading” through thousands of scientific articles and summarizing the information it finds into a single chart that NIMS researchers believe can be helpful in speeding up the materials design process. Processes such as discharge machining and plasma sintering; structural properties such as matrix phase and particle size distribution; and other properties, such as fatigue behavior and shock resistance, are all included in the chart. The research around the CAMaD system was published in the journal, Science and Technology of Advanced Materials.

"Our developed system extracts keywords classified into process, structure, and property and the relations between keywords from text of scientific articles,” study co-author Ikumu Watanabe told Design News. “The extraction process is carried out on the basis of training data, which is predefined as known information. Here, the system can discover new keywords and its relations, which are used in similar sentences and phrases to training data. Using the relation score calculated through the extraction process, a chart is drawn."

Let's say a user was looking for a material with both strength and ductility. Takeshi Onishi, lead author of the study, outlined the basic steps by which this would take place. “First, the system, using natural language processing, [combs through articles and] finds sentences describing "strength" and a structure name, such as 'austenite,' Onishi said. “The system then reads the sentence and finds if the 'austenite' is important to 'strength.' If the 'austenite' is important to 'strength,' then our system finds sentences describing 'austenite' and a process name, such as 'annealing.'

“The system reads the sentence and finds if the austenite is important to 'annealing,' similar to 'ductility.' [Then] the system draws a chart based on the properties ('strength' and 'ductility'), structures ('austenite' and others), and processes ('annealing' and others) that are found...The chart depicts the relationships between these elements.”

Driving the analysis is a type of deep learning neural network known as a convolutional neural network (CNN). A CNN is a type of neural network that crudely mimics the visual system of the human brain and is typically used in applications such as image recognition. Here, the NIMS researchers were able to apply a CNN to the task of natural language processing—specifically, recognizing and understanding written words—by having it understand words as images.

The network is trained by being exposed to a large set of training data, based on pairs of factors and sentences, that essentially teaches it to recognize a property or a process being mentioned in a block of text. When a carefully prepared user request is submitted in the form of text to the CNN, the system scans through its article database looking for the requested properties and finds processes and structures that are associated with it. In the particular case of this research, the database consisted of 3400 articles available on ScienceDirect, collected by searching keywords related to material and microstructure.

Material design is only one of the possible outputs. The larger objective, according to Watanabe, "is to develop a prototype system for multi-link relation extraction using natural language processing technology and machine learning.” But this work advances the state of design in the age of Big Data in two important aspects—particularly with regard to the increasingly complex challenge of material selection. First, it shows a path forward in making the vast body of human knowledge available to machine learning systems. Second, with the relationship chart, it demonstrates one potentially valuable way of making the results of this type of Big Data analysis accessible and comprehensible to human designers and engineers.

In an effort to promote further research, the NIMS team has made the full AI source code freely available for download.