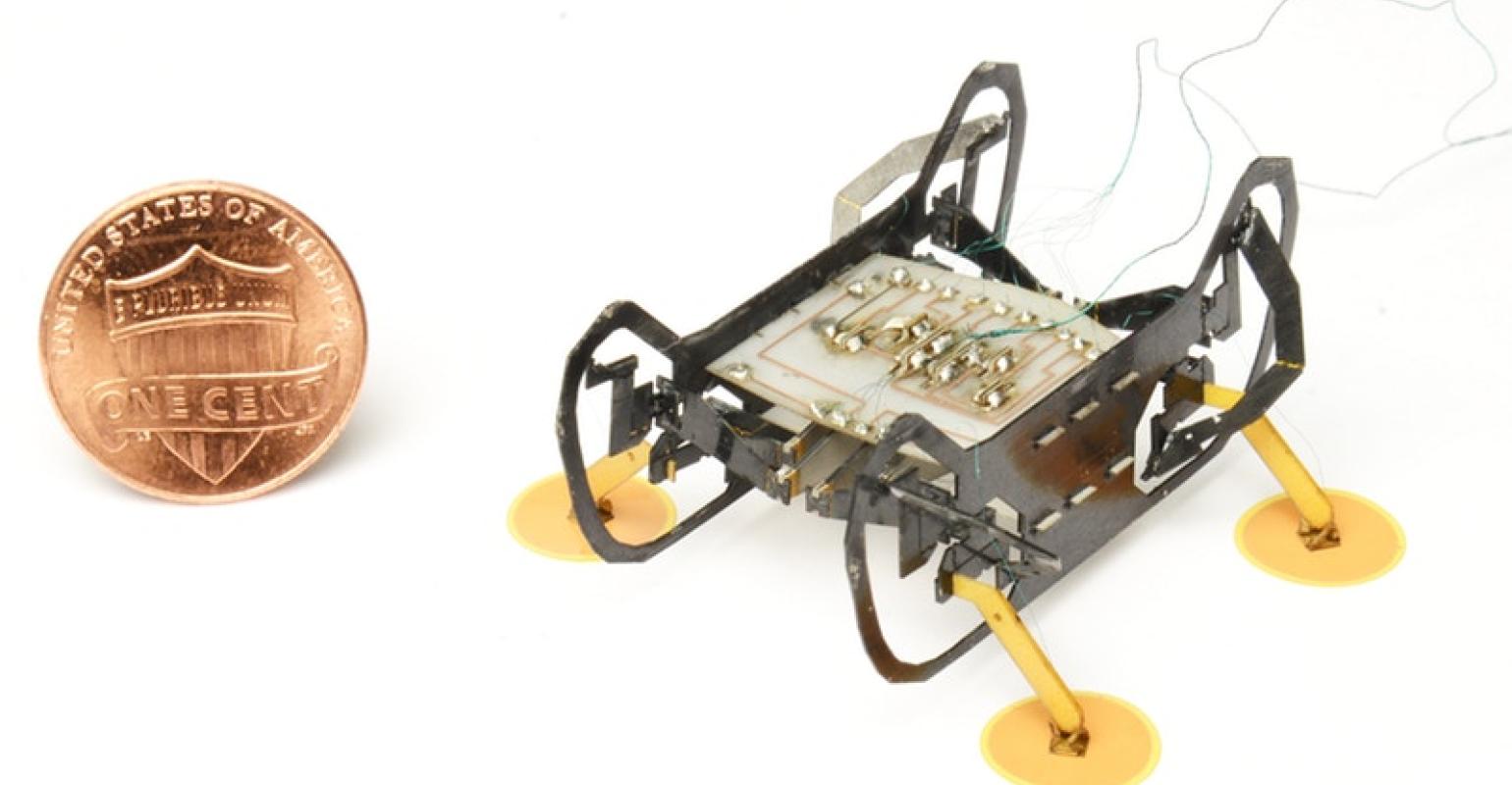 Researchers at Harvard University have used inspiration from the Japanese paper art of origami, among other things, to develop a robot that can climb on various surfaces that are difficult for humans to traverse, making the machine well-suited for use in aerospace and other applications.

Harvard University’s Wyss Institute for Biologically Inspired Engineering and John A. Paulson School of Engineering and Applied Sciences (SEAS) are at the forefront of current robotics work. The latest invention from researchers at the facilities—a micro-robot called HAMR-E with electro-adhesive foot pads, origami ankle joints, and a specifically-engineered walking gait—shows this innovation.

The moniker HAMR-E stands for Harvard Ambulatory Micro-Robot with Electroadhesion. The robot’s unique properties allow it to climb on vertical and upside-down conductive surfaces, such as the inside walls of a commercial jet engine, researchers said in a Wyss Institute news release.

HAMR-E can explore in three dimensions rather than just moving back and forth on a flat surface, making it well-suited for use in difficult, hard-to-reach areas, said Sébastien de Rivaz, a former Research Fellow at the Wyss Institute and SEAS and who now works at Apple.

“There’s a whole new world that they can move around in and engage with,” he said. “They could one day enable non-invasive inspection of hard-to-reach areas of large machines, saving companies time and money and making those machines safer,” he added.

This aspect of the robot is significant because jet engines can have up to 25,000 individual parts, which makes regular maintenance an arduous task that can take over a month per engine, de Rivaz said. Other complex machines share this similar issue for those tasked with keeping them maintained and safe for operation, making the robot attractive for use with them as well, he said.

Indeed, researchers developed HAMR-E in response to a challenge issued to the Harvard Microrobotics Lab by Rolls-Royce, which specifically requested the design of micro-robots that could climb inside parts of its jet engines that are inaccessible to human workers.

Researchers expanded the abilities of an ambulatory robot they already created called HAMR so it could stick to and traverse the vertical, inverted, and curved surfaces that are found in jet engines and other machine parts, they said.

To do this, they created adhesive foot pads that can both keep the robot attached to the surface even when upside-down, but also allow the robot to “walk” by lifting and placing its feet.

The pads they developed are comprised of a polyimide-insulated copper electrode. To release and re-engage the pads, the robot switches an electric field on and off. This field operates at a voltage similar to the power required to move the robot’s legs, to keep the robot energy-efficient, researchers said. The pads also are flexible, allowing the robot to climb on curved or uneven surfaces.

Another design point crucial to HAMR-E’s capabilities are new ankle joints that can rotate in three dimensions to compensate for leg rotation as it walks. This allows the robot to maintain its orientation on its climbing surface, according to the team, which manufactured the joints out of layered fiberglass and polyimide. They then folded them into an origami-like structure so the robot’s ankles can rotate freely and align with the terrain as HAMR-E climbs.

The final piece of the puzzle allowing for HAMR-E to meet the design challenge was the creation of a special walking pattern for the robot, which requires three foot pads touching a vertical or inverted surface at all times to prevent it from falling or sliding off. Researchers published a paper on their work in the journal Science Robotics.

HAMR-E also successfully maneuvered around a curved, inverted section of a jet engine while staying attached, a test crucial to demonstrating it’s up to the task for which it was designed, said Robert Wood of Wyss, a professor of engineering and applied sciences at SEAS.

“This iteration of HAMR-E is the first and most convincing step towards showing that this approach to a centimeter-scale climbing robot is possible, and that such robots could in the future be used to explore any sort of infrastructure, including buildings, pipes, engines, generators, and more,” he said.

The team plans to continue its work to refine HAMR-E by incorporating sensors into its legs that can detect and compensate for detached foot pads to help prevent it from falling off of vertical or inverted surfaces. Researchers also are exploring options for using HAMR-E on non-conductive surfaces.