After the Myths: An Interview with MythBusters' Jamie Hyneman 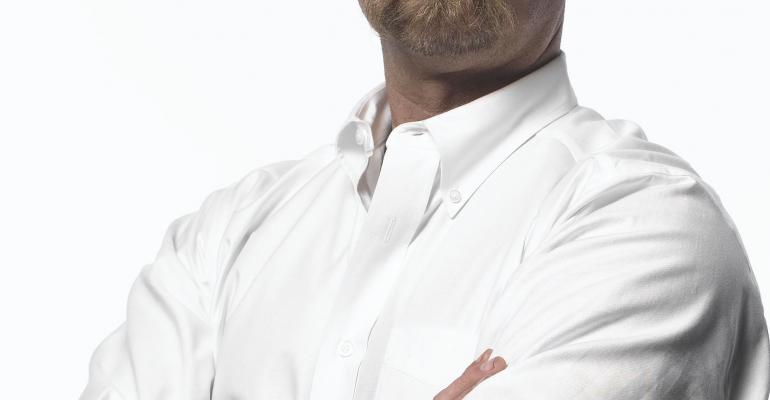 The former co-host of MythBusters talks about life after the show; America's need for rational thought; and what he's doing with surplus army vehicles.

Jamie Hyneman is pretty much satisfied. After 14 years as the co-host of the hit TV series MythBusters, he says he's left no myths behind. There's no hint of regret or even nostalgia when he talks about his time on the show, which premiered in January 2003 and ended its run in March 2016. Hyneman, who will be delivering a keynote address at Pacific Design & Manufacturing on February 7, talks about the show in the same way any other person might describe a productive day at the office – rewarding, but another chapter closed all the same.

“There's enough episodes of MythBusters that you could watch it for a couple of weeks,” Hyneman said via phone from his workshop in San Francisco – the famed MythBusters workshop that he now calls his own. “After 14 years the material did start to thin out. We figured it was time to throw in the towel.”

The very nature of the show – Hyneman and his co-host Adam Savage tackling all manner of urban legends, curiosities, and sometimes just outright intriguing questions, all via scientific experimentation – meant the MythBusters crew was among the hardest working in the television industry. “We didn't know how things would turn out,” Hyneman says, “For the most part it was legitimate experimentation. We may not have had large sample sizes, but we were actually experimenting and there had to be unpredictable results. We had to build things ourselves on a tight time frame.”

But through all of the crazy experiments Hyneman says the MythBusters team was never attached to the outcome. “We didn't care. We would experiment and present the data. Whether it was true or false was irrelevant. It's what the data said.Over the course of 14 seasons the show took on myths as varied (and dangerous) as whether using a cell phone near a gas pump could cause an explosion (it won't), to whether you can kill someone with a penny dropped from the Empire State Building (you can't), to stunts like determining whether you can survive two identical, simultaneous explosions by standing halfway between them (nope).

“One thing we did discover however is that the scientific process is a pretty good template for storytelling. You start with a hypothesis, you have a body of work in the middle, then you come up with a conclusion.”

He cut his teeth and satiated his interest in engineering by working in the special FX industry. But in the time before starting his own FX company Hyneman worked, among other occupations, as a dive master, wilderness survival expert, boat captain, linguist, animal wrangler, concrete inspector, and chef. “At some point I realized I had done all of these different things and I thought I should become methodical about what I wanted to do for a living. Special effects was very creative. It involved a variety of materials and processes, working with variety of people, and the work itself didn't just end up on somebody's shelf; it ended up in a wider context,” he says.

His special effects career began as a shop assistant in the New York City area and he eventually made his way to Bay Area San Francisco. Over the course of 25 years working in FX Hyneman had a hand in producing effects for 800 commercials and dozens of well known and cult favorite films including Naked Lunch, Arachnophobia, and the original Robocop.

In 1996 Hyneman founded his own FX company, M5 Industries (the five M's are Models, Machines, Miniatures, Manufacturing, and Magic), but the company found itself struggling in later years as the film and TV industry moved away from practical effects to computer-generated ones. Seeking new avenues for the company Hyneman was tapped as one of several special effects artists being brought in to pitch themselves as hosts of a show for the Discovery Channel original titled Tall Tales or True, created by an Australian producer named Peter Rees. Discovery agreed to produce a three-episode series pilot to test the waters and brought on Adam Savage as the co-host. Hyneman and Savage had worked together previously on BattleBots – a TV series that featured homemade robots dueling to the death.

“MythBusters was the last thing I ever thought would take off,” Hyneman admits, “Urban legends had no special interest to me. After the first three episodes I figured it was over because that was about all I knew of urban myths.”

But it took 14 years for the material to thin out. “The gist of it was it became more about satisfying our curiosity through experimentation. We had creative license to go after anything that attracted our curiosity and we had a checklist of three criteria: It had to have some unexpected, counterintuitive aspect; it had to be funny, hopefully; and bonus points if was at least sort of destructive.”

The Power of 'Wow'

In the dynamic of the show Hyneman was the straight man, balancing out Savage's almost manic curiosity with the sobering even-temperedness of a seasoned college professor. In one episode, in which the team attempts to build a rocket-powered car capable of flight, Hyneman remains the one stoic throughout the whole ordeal – uttering only a uncharacteristically loud, but still strikingly calm “Wow” as the car hits a ramp and bursts into flames. He's clearly interested in the data and results rather than the explosions themselves.

That same sort of calm objectivity that comes through in his own personality is what Hyneman hopes will also be the lasting legacy of the show. “I would like to think we've done something and reached enough of the population to make people want to make thoughtful decisions and pay attention to science,” he says. “But there's a large portion of the population that doesn't do that.

“It baffles me to this day that when we're surrounded by so much technology and science we also have so much irrationality at the same time. If you look at the things we have, like cellphones – all of that doesn't come from irrationality... I suppose a belief in something implies the ability to disregard facts and rationality.”

The Jamie Hyneman you speak to comes off exactly like his on-camera persona. You get the sense that the word “belief” is not something he's fond of, at least without hard facts to back it up. “If someone wants to say there's no global warming and the Earth is flat, where does that come from? It's part of the culture that they've grown up with. The culture requires believing in something in spite of rational thought,” he says. Hyneman doesn't like to get political, but he says our current political climate should serve as a red flag for scientists and engineers. “I take it as a warning that despite all of these technologies that make us seem so advanced, because they represent the work of large of numbers of very smart and hardworking people... In spite of that here's a large portion of the population that just doesn't go there.”

But Hyneman has plenty to be optimistic about as well. These days he spends his time back at the M5 workshop (the same place that functioned as the MythBusters workshop), that he's now converted from a special effects studio into his own personal R&D facility.

“I've come up with a number of inventions and I'm employed by different people to do prototyping and R&D,” Hyneman says. He notes one of the best parts of having his own shop again is that he gets to listen to music while he works (he prefers techno). “It sounds like a small thing, but for both Adam and I what was unfortunate is that when you're on camera all the time there's no music. Music is like a metronome and for most people in our line of work music is a large part of the process.”

One of his latest projects? A robotic firefighting vehicle.

“I have a full size track vehicle, like a tank, and I'm converting it to remote control. It's a pretty unique design. It's actually able to go into a fire of any magnitude and sit there. We can go right into the base of a burning tree, for example, which means using less water since it has to be shot over a shorter distance than with human firefighters.”

Talking about his own work, you can hear that calm spark in Hyneman's voice, that “wow” from the rocket car episode:

“Let's say a fire makes it into a neighborhood, as happens in some cases. Well normally you'd have to evacuate, but these [robotic vehicles] are made from surplus US military armored personnel carriers that we can repurpose. We could set up a mobile fire brigade and stop the fire.”

While he says he doesn't miss the limelight (he calls the pressures of having to self-promote as a celebrity via social media “soul destroying”), he does admit that his celebrity can be helpful in getting ambitious projects like these to the next stage. “For a firefighting technology to work it needs state or federal support. Unfortunately, it's not just about the device, it's about getting bureaucrats to support it. And that's something that celebrity helps with.”

Hyneman also remains fascinated with technologies outside of his own work. “I'd say bioengineering excites me the most right now,” he says. “Bioengineering is having an, as yet to be fully appreciated, profound effect – the ability to manipulate genes.”

He's right to be excited. Emerging technologies like CRISPR editing could someday let scientists explore the human body with the same sort of scrutiny and creativity the MythBusters team approached questions like whether cockroaches can survive a nuclear blast (they can't, but will survive longer than a human would).

“It's one thing to be able to manipulate something in a lab, but imagine combining that with robotics and other kinds of ability to scale by having the biology do the work for you,” Hyneman says. “Once we start to scale these things the landscape will change drastically in terms of medicine and food production, aging, and a lot of other things. We're just beginning to scratch the surface.”

If the scientific method makes a great narrative tool, it's easy to see it playing out in Hyneman's life – from the early career experimentation to where he is now. Despite the show's outstanding success, MythBusters may only be a second act for Hyneman. Maybe his hypothesis was always about finding rewarding work and he's now heading toward a conclusive answer. “I think I grew up in the Midwest and work was what you did to make money, and you had fun afterwards,” Hyneman says. “But if you can find something you love and can earn a living doing, money will take care of itself...My value isn't in how many people approve of what I'm doing.”

Jamie Hyneman will be delivering a keynote at Pacific Design & Manufacturing on February 7 at 12:00PM.

If you have any questions you'd like him to answer during his talk please leave us a comment. We'll forward along the best ones!