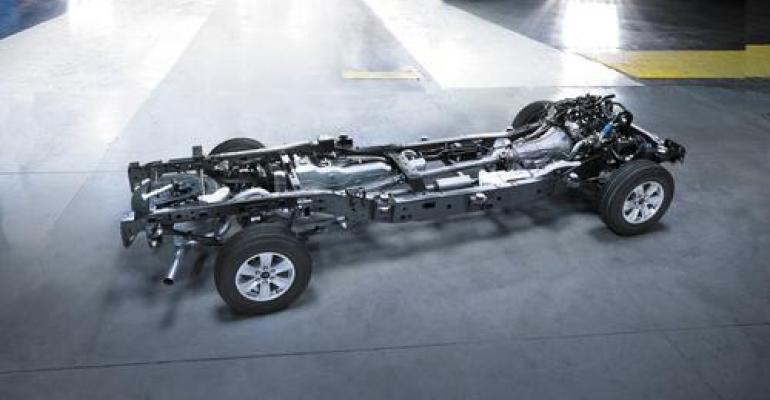 Thanks to a bevy of new high-strength steels and aluminum alloys, vehicle designers are cutting weight and boosting fuel efficiency. They’re also enhancing acceleration, shortening stopping distances, and improving handling with smart, strategic materials use and topography. And they’re doing all that not just on high-end sports cars but with high-volume, middle-of-the-road vehicles.

“Using high-strength steels, we saved up to 55 lb on the frame of the F-150,” said Pete Friedman, manager of the Manufacturing Research Department at Ford Motor Co. “The frame is now wider and stiffer than the outgoing model, and yet it’s still lighter.” 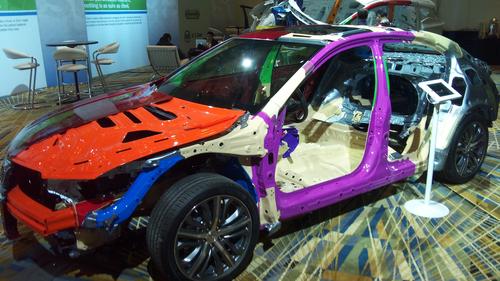 Indeed, engineers are seeing the benefits. Ford uses a high-strength, dual-phase steel for about 78% of the F-150’s frame, up from about 23% on earlier models. The high-strength steel, offering yield strength of about 70 ksi, is mostly responsible for a 55-lb weight loss for the frame. Moreover, the high-strength steels combined with aluminum alloys in the body to trim about 700 lb, taking the F-150 from about 5,500 lb to 4,800 lb.

MORE FROM DESIGN NEWS: Why Ford Was Able to Use Aluminum in F-150 Truck

“You can get the weight out with other materials, like carbon fibers, but you do it at a very significant cost penalty,” said Dean Kanelos of the Steel Market Development Institute. “With high-strength steels, there’s no big cost penalty.”

The migration to high-strength metals has been brewing for a couple of decades. Dual-phase and boron-based steels with higher yield strengths began creeping into the auto industry more than 10 years ago.

Today, autos are using high-strength alloys with yield strengths in excess of 200 ksi. The Chevy Colorado, for example, employs steels with yield strengths ranging from about 145 ksi to as high as 217 ksi. Such steels are used throughout the frame, with the A- and B-pillars getting the strongest materials.

Similarly, automakers are employing manufacturing processes (rolling followed by hot stamping) that enable them to vary gauge thicknesses of A- and B-pillars. That way, the middle of the pillar can have thicknesses around 2 mm for greater buckling resistance while the ends use a thickness of 1 mm. “You can put the weight and strength specifically where you need it,” Kanelos said. “And you don’t have to put extra weight in areas where you don’t need it.”

One of the motivators for such changes is tougher crash standards. Automotive engineers who want five-star government crash-test ratings find that conventional mild steels (36 ksi) simply don’t provide the desired results. To achieve the higher ratings, they selectively apply high-strength steels in the cab structures. That way, the passenger compartment is less likely to deform under load, so that airbags are allowed to do their jobs and save vehicle occupants during some of the worst frontal crashes.

Looming corporate average fuel economy (CAFE) standards are another motivation for auto engineers. It’s said that for each 1% weight reduction, a 0.5% bump in fuel economy results.

As it stands today, automakers are expected to reach company-wide averages of 54.5 mpg for their vehicles by 2025. By employing new alloys, engineers can cut the weight of their frames and bodies and, in some cases, employ smaller engines.

High-strength steels aren’t the only solutions, however. Some exotic sports cars – Aston Martins and Jaguars being prime examples – have used aluminum bodies for years. But the emergence of aluminum in mid-market and entry-level vehicles is a relatively new phenomenon. The F-150 was one of the first, topping off its high-strength steel frame with an aluminum cab, hood, tailgate, floor, and front end, along with high-strength aluminum fenders and doors. 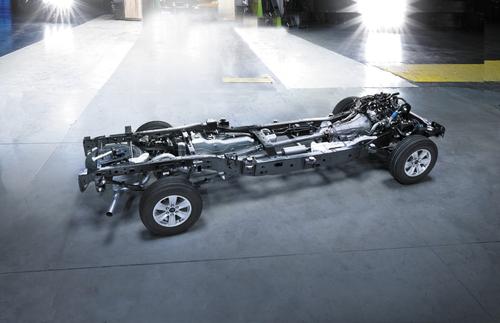 Ford said the expertise for such transformations came from lessons learned via Aston Martin and Jaguar. Using sophisticated computer modeling techniques employed by the two luxury sports car manufacturers, Ford engineers were able to adopt a 6000 Series aluminum alloy that’s commonly used in aerospace and military designs. The alloy offers yield strength of about 30 ksi -- and about 45 ksi when the material is heat treated.

The big advantage is less mass. Although aluminum’s Young’s Modulus is low, it has a density that’s about one-third that of steel. As a result, design engineers can compensate for the inherent lack of stiffness by using thicker parts.

“We have more volume, more thickness, on every panel of the F-150,” Friedman said. “But because the density is only one-third, we still weigh less.”

To be sure, the weight advantages of aluminum don’t apply to every structural situation. The key is the type and magnitude of the loads. “There&rsrsquos a reason why we used a steel frame in the F-150,” Friedman said. “We could have made an aluminum frame, but we wouldn’t have saved much weight.”

Cost is also an issue. Aluminum is still more costly than steel. That’s why engineers say they never set out to build an all-aluminum or all-high-strength-steel vehicle. They look at the desired fuel efficiency goals, safety needs, and cost considerations and then weigh their options.