HomeMaterials3D Printing Techniques Bettered by Studying How Droplets Freeze on Surfaces
Recent
Materials
Novel 3D Printing Method Used to Replenish Coral Reefs
May 16, 2022
Volkswagen’s Electric Successor to the International Scout 4x4
May 16, 2022
The Music Is Over For Apple's iPod
May 16, 2022
Q&A With IndyCar Gearbox Expert Anna Chatten
May 13, 2022
POLL
Intel Unveils Trust Authority to Boost Security
May 13, 2022
Supplier News Looks at Highly Customizable Industrial Monitors
May 12, 2022
Here Technologies Maps are Key to Mercedes Level 3 Automation
May 12, 2022
'We Built the Domino's Pizza Tracker for Manufacturing'
May 12, 2022 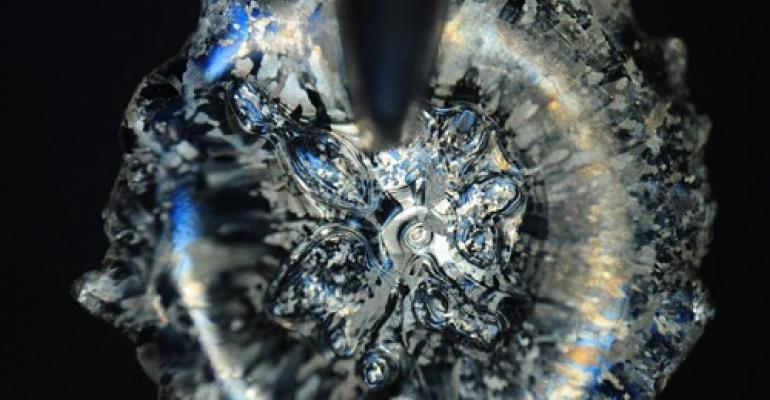 Researchers at MIT have made a new, significant discovery in terms of the mechanics involved when droplets come in contact with surfaces, research that could help develop new 3D-printing techniques and improve other applications.

MIT Associate Professor of Mechanical Engineering Kripa Varanasi and his team studied what happens when freezing droplets impact a surface, observing not only the hydrophobic aspects of that action—which is what is typically done—but also the thermal properties.

Normally droplets just stick to a surface or bounce away, and controlling this response is critical to a number of applications, including 3D printing, the spraying of some surface coatings, and the prevention of ice formation on structures such as airplane wings, wind turbines, or power lines.

However, in studying the thermal properties of the surface, researchers noticed something that could allow them to “tune” surfaces to meet the exact needs of a given application, Varanasi said.

Specifically, researchers studied the properties of drops of molten metal freezing onto a surface. In doing so, they “found something very interesting,” Varanasi said.

“We had two substrates that had similar wetting properties—the tendency to either spread out or bead up on a surface—but different thermal properties,” he said.

Without considering the thermal properties, the tendency would be to assume the way the droplets acted on the surfaces would have been similar. However, they turned out to be significantly different, Varanasi said.

On silicon, which, like most metals, conducts heat very well, the molten metal just fell off, he said. But on glass, a good thermal insulator, the drops stuck on it and were difficult to remove, Varanasi said.

The discovery showed researchers that by controlling the thermal properties of a surface, they could also control the adhesion of a droplet on that surface, he said.  This represents “a whole new approach” to determining how liquids interact with surfaces, providing new tools that allow scientists “to control the outcome of such liquid-solid interactions,” Varanasi said.

Varanasi and fellow researchers and former MIT post-docs Jolet de Ruiter and Dan Soto published a report about their findings in the journal Nature Physics.

Although the team carried out their experiments with molten metal—which is used in some industrial processes as well as in the spray coatings applied to turbine blades and other machine parts—Varanasi said that the results could likely apply to many kinds of other liquids, as well.

“Our findings will provide a whole new understanding of when things stick and when they don’t,” he said.

As the degree to which droplets stick or don’t depends on a material’s thermal properties, the work also paves the way for the possibility to customize those properties based on the application, according to researchers

The work has a number of applications for when outcomes require that droplets stick to surfaces—such as in some kinds of 3D printers to ensure each printed layer adheres thoroughly to the previous layer. It also can apply to the reverse scenario—in situations in which it’s important to prevent droplets from sticking, such as on airplane wings in cold and icy weather, according to researchers.

Other applications include the cleaning and waste management of additive manufacturing and thermal spray processes, they added.