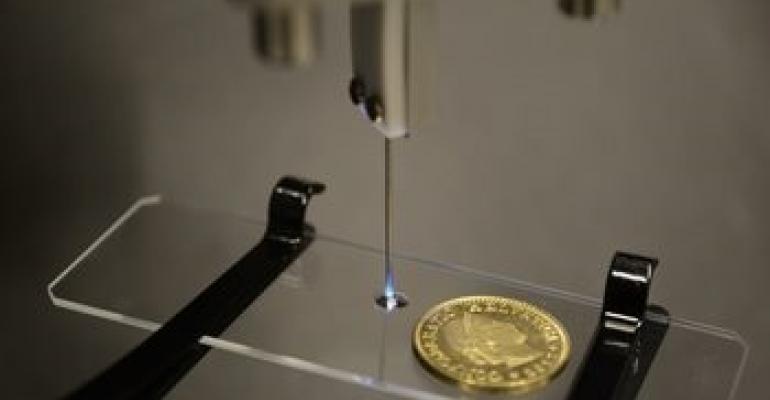 New laser-based 3D printing that uses optical fibers could be the way forward to fabricate custom bio-compatible devices inside the human body to repair damaged tissue.

A new laser-based 3D printing technique that uses optical fibers could be the way forward to fabricate custom bio-compatible devices inside the human body to repair damaged tissue.

The structures—which have a 1.0-micron lateral and 21.5-micron axial printing resolution—so far only have been created on a microscope slide. However, researchers believe they can use them to study how cells interact with various microstructures in animal models, opening the door to the possibility of endoscopic printing of microstructures in people, said Paul Delrot, the lead researcher on the work.

“With further development our technique could enable endoscopic microfabrication tools that would be valuable during surgery,” he said. “These tools could be used to print micro- or nano-scale 3D structures that facilitate the adhesion and growth of cells to create engineered tissue that restores damaged tissues.”

To create the microstructures, the researchers dipped the end of an optical fiber into a liquid known as photopolymer. This material solidifies when illuminated with a specific color of light; they used the optical fiber to deliver and digitally focus laser light point-by-point into the photopolymer to build the 3D microstructure.

In addition to new types of microstructure fabrication, the technique also could be used as an add-on to today’s commercial 3D printers to print delicate details on large parts, Delrot said.

“By using one printer head with a low resolution for the bulk parts and our device as a secondary printer head for the fine details, multi-resolution additive manufacturing could be achieved,” he said.

Researchers published a paper about their work in the journal Optics Express.

Key to the team’s work was to simplify laser-based microfabrication, which typically relies on a non-linear optical phenomenon called two-photon photopolymerization to selectively cure a volume deep inside a liquid-photosensitive material, researchers said.

These techniques have historically been difficult to use for biomedical applications because the phenomenon requires complex and expensive lasers that emit very short pulses as well as bulky optical systems to deliver the light, Delrot said. However, researchers were able to scale down the system due to their expertise in manipulating and shaping light through optical fibers, he said.

“In addition, to make the system more affordable, we took advantage of a photopolymer with a nonlinear dose response,” Delrot said. “This can work with a simple continuous-wave laser, so expensive pulsed lasers were not required.”

To create hollow and solid microstructures, the researchers used an organic polymer precursor doped with photoinitiator made of off-the-shelf chemical components, he explained. They focused a continuous-wave laser emitting light at 488-nanometer wavelength--visible-wavelength light that is potentially safe for cells--through an optical fiber small enough to fit in a syringe.

After that, the team used an approach known as wavefront shaping to focus the light inside the photopolymer so as to cure only a small 3D point. Performing a calibration step prior to microfabrication allowed them to digitally focus and scan laser light through the ultra-thin optical fiber without moving the fiber, Delrot said.

Though they have proved their technique in the lab, researchers have some work to do before it can be used on people in medical applications. For one, they must develop biocompatible photopolymers and a compact photopolymer delivery system, which they are currently working on.

Researchers also need a faster scanning speed, but said they can overcome this limitation by using a commercial endoscope instead of the ultra-thin fiber in cases where the instrument size is not critical.

Finally, the team also must create a technique to finalize and post-process the printed structure inside the body is required to develop microstructures with biomedical functions, Delrot said.

“Our work shows that 3D microfabrication can be achieved with techniques other than focusing a high-power femtosecond pulsed laser,” he said. “Using less complex lasers or light sources will make additive manufacturing more accessible and create new opportunities of applications such as the one we demonstrated.”