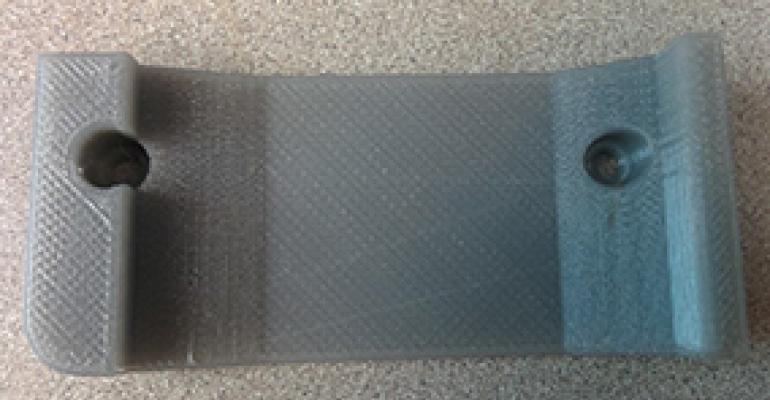 US military researchers have developed a way to use recycled bottles and other refuse materials to 3D-print replacement parts for soldiers in the field.

Military personnel stationed around the world often have a long wait when they need a critical replacement part. Now, the US Army Research Lab (ARL) and the US Marine Corps have partnered to develop a way to kill two birds with one stone by recycling the plastic bottles and bags the military uses and 3D-printing needed materials in the field.

Nicole Zander, a researcher at ARL, and US Marine Corps Capt. Anthony Molnar are working on a joint project to break down recycled polyethylene terephthalate (PET) plastic into filament to use as a starting material for 3D printers. The material then can be fabricated into plastic parts for radios, canteens, and other items soldiers can use in the field.

“The main focus is on PET, which is commonly used to make water and soda bottles and also things like salad containers,” Zander said in a video about the research that ARL posted on YouTube. "That’s an engineering-grade plastic. It has good mechanical properties and would be a good first candidate for recycled materials.”

Zander has been exploring the idea at ARL to 3D print items using PET recycled plastic for some time, she said. “I’d done some previous research on recycled plastics to make water filtration membranes. And with the push for 3D printing and the popularity of it, I thought: Why don’t I see if I can use these recycled plastics to make filament for 3D printers?” Zander explained. “That way, the soldiers would be able to print what they need in any location because everyone has water bottles and things like that laying around that they can use and make a value-added item.”

Meanwhile, at the Marine Corps, Zolnar was inspired by a demonstration he saw there to turn the plastic bags from Meals Ready to Eat (MREs) into canteens that personnel could use. “Plastic bags and bottles are some of the top waste materials on the battlefield,” he said in the video.

In late 2016, Molnar’s own ideas to recycle plastic for 3D printing won an Innovation Challenge, which the Marine Corps sponsored seeking ideas to improve logistics. Molnar was then paired with Zander to put their heads together and see what they could come up with to advance their ideas together.

That team determined that PET filaments, produced by recycling, were just as strong and flexible as commercially available filaments for 3D printers. In tests, the team used recycled PET filaments to print a vehicle radio bracket—an essential military part that often takes much time to replace. It took about two hours using 10 water bottles to print the bracket.

Initially, the researchers determined that other types of plastic, such as polypropylene (PP)—used in yogurt or cottage cheese containers, or polystyrene (PS)—used for plastic utensils, were not practical for use in their project. Yet they did some experimenting to see if their minds could be changed.

By mixing PP with cardboard, wood fibers, and other cellulose waste materials found on military bases, they strengthened it and created new composite filaments. They also blended brittle PS with ductile PP to generate a strong and flexible filament. Both of these materials also have possibilities for use to make strong, 3D-printed items, they said.

The collaborative team recently won funding from the military to build a mobile recycling trailer that will enable specially trained soldiers to fabricate 3D-printing filaments from plastic waste, they said. Zander also is exploring ways to print materials from plastic pellets instead of filaments, which could help soldiers produce larger 3D-printed parts and machinery more rapidly.

“I love working on this project,” Zander said. She added that the work not only has great potential to improve life for military personnel, but “…could also be transitioned to developing countries and rural areas to have a great impact on their lives as well.”