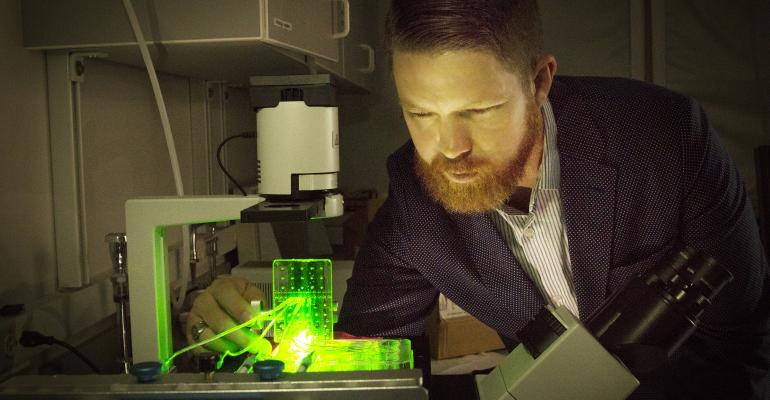 Researchers at the University of Utah have developed a 3D bioprinting method for creating ligaments and tendons out of the patient’s own cells.

Researchers are trying to make things easier on people who damage ligaments and tendons by 3D bioprinting the tissue using patients’ own cells to help speed their recovery.

A team at the University of Utah has developed a method to 3D print cells to produce this type of human tissue by taking stem cells from the patient’s own body fat and printing them on a layer of hydrogel to form a tendon or ligament, said University of Utah biomedical engineering assistant professor Robby Bowles. They then grow the cells in vitro in a culture before implanting them in a patient, he said in a University of Utah press release.

“It will allow patients to receive replacement tissues without additional surgeries and without having to harvest tissue from other sites, which has its own source of problems,” said Bowles, who led the research. The novel process can allow for faster recovery for people with damage to ligaments and tendons because it eliminates that need to harvest tissue from other sites on the body, which is typically done today in such tissue-replacement surgeries, he noted.

This surgery is not easy for clinicians to perform because connective tissue such as that of ligaments and tendons is made up of different cells in complex patterns, Bowles said. For example, cells that make up the tendon or ligament must then gradually shift to bone cells so the tissue can attach to the bone.

What researchers have developed “is a technique in a very controlled manner to create a pattern and organizations of cells that you couldn’t create with previous technologies,” he said. “It allows us to very specifically put cells where we want them.”

Bowles and his team had help in doing the intricate work required for their method from Salt Lake City-based company, Carterra, Inc., which develops microfluidic devices for medicine.

Carterra provided the 3D printer for the work—one that is typically used to print antibodies for cancer screening applications. To customize it for the current research, Bowles’ team developed a special print head for the printer that can lay down human cells in a very controlled way, he said. Researchers then demonstrated a proof of concept by printing out genetically modified cells that glow a fluorescent color so they can visualize the final product. Researchers—including former University of Utah biomedical engineering master’s student, David Ede—published a paper on their work in the Journal of Tissue Engineering, Part C: Methods.

The team developed its method for creating ligaments, tendons, and spinal discs, but “it literally could be used for any type of tissue engineering application,” said Bowles, who specializes in musculoskeletal research. Scientists also can customize the print head for any kind of 3D printer and apply the work to 3D-printing entire human organs—something researchers have been aiming to do for years, he added.