3D Printing of a ‘Bionic’ Eye 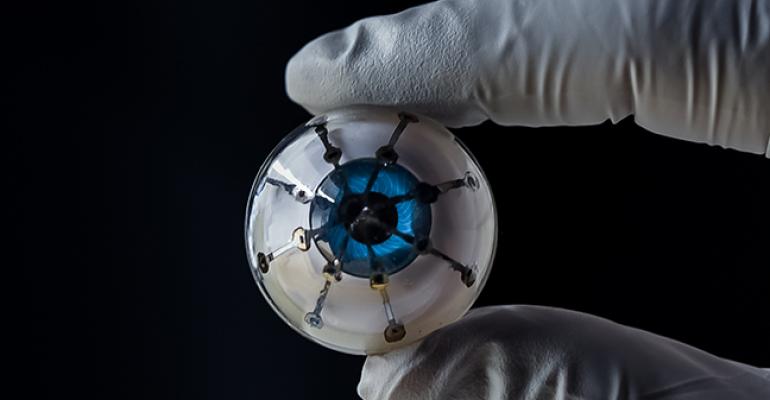 <p><strong>Restored Vision for the Blind </strong></p><p>Blind superhero Daredevil can “see” thanks to years of martial arts training and a special radar sense (mostly the radar sense). But thanks to the latest advances in medical science we won't need freak accidents to restore sight to the blind.</p><p>In 2018 University of Minnesota researchers created a fully 3D-printed array of light receptors on a hemispherical surface – the first step toward what they say could be a <a href="https://www.designnews.com/materials-assembly/3d-printing-bionic-eye/14656380559410" target="_blank">bionic eye</a> (shown). Researchers led by Laboratory of Organic Electronics at Linköping University in Sweden are also currently developing <a href="https://www.designnews.com/materials-assembly/artificial-retina-made-tattooing-inks-could-restore-sight/59172988658817" target="_blank">artificial retinas</a> made from photoactive films that use organic pigments that could successfully repair certain types of blindness.</p><p>There's no word on anyone developing an easier way to train martial arts and gymnastics however.</p><p><em><em>(Image source: University of Minnesota, McAlpine Group)</em></em></p>
University of Minnesota engineers have 3D-printed electronics on a curved surface, paving the way for the future fabrication of an artificial eye that potentially could restore someone’s sight.

Researchers say they are a step closer to 3D-printing what they call a “bionic” eye after developing a fully 3D-printed array of light receptors on a hemispherical surface. The team of engineers at the University of Minnesota has achieved the printing of electronics on a curved surface—in this case, a hemispherical glass dome.

This is critical foundational technology for the development of an artificial eye that can help return sight to people who have lost it, said Michael McAlpine in a news release from the University of Minnesota. McAlpine, an associate professor of mechanical engineering at the university, led the research.

“Bionic eyes are usually thought of as science fiction, but now we are closer than ever using a multi-material 3D printer,” he said. McAlpine’s mother is blind in one eye, so his interest in developing an eye is not just professional, but personal, he said in the news release. “Whenever I talk about my work, she says, ‘When are you going to print me a bionic eye?’” McAlpine said.

The latest work by his group at the University of Minnesota aims to tackle exactly this problem. To 3D print electronics on a glass dome, the team started with a base ink of silver particles using a 3D printer that was custom built for the purpose.

Printing on a Dome

Instead of running down the curved surface of the dome, the dispensed ink stayed in place and dried uniformly, researchers said. They then used semiconducting polymer materials to print photodiodes, which convert light into electricity.

From start to finish, the printing of the electronics on the dome takes about an hour. During the process, the team discovered that they achieved 25 percent efficiency in converting the light into electricity with the fully 3D-printed semiconductors—something researchers did not expect, McAlpine said.

“We have a long way to go to routinely print active electronics reliably, but our 3D-printed semiconductors are now starting to show that they could potentially rival the efficiency of semiconducting devices fabricated in microfabrication facilities,” he said. “Plus, we can easily print a semiconducting device on a curved surface, and they can’t.”

McAlpine already has previous experience in 3D printing a bionic appendage that can potentially serve as the real thing. While working at Princeton University, he and his team there developed a bionic ear. It comprised cartilage and electrical technology and was fabricated using 3D printing.

The team plans to continue its current work to develop a prototype that includes even more light receptors that work with even better efficiency, McAlpine said. Researchers also aim to find a way to 3D-print on a soft hemispherical material that can be implanted into a real human eye, he said.

At ESC Minneapolis, McAlpine will speak at 1 pm on Wednesday, Oct. 31. He said his keynote, “will introduce the audience to the concept of 3D printing functional materials and devices, which is enabled by our group's custom-built 3D printers, which allow us to print a broad range of materials and devices, including fully 3D printed semiconducting devices and 3D printed neural regeneration devices.” For more information on the Minneapolis edition of the Embedded Systems Conference, click here.