3D-Printed ‘Smart’ Biomaterials Respond to Stimuli, Can Degrade on Demand 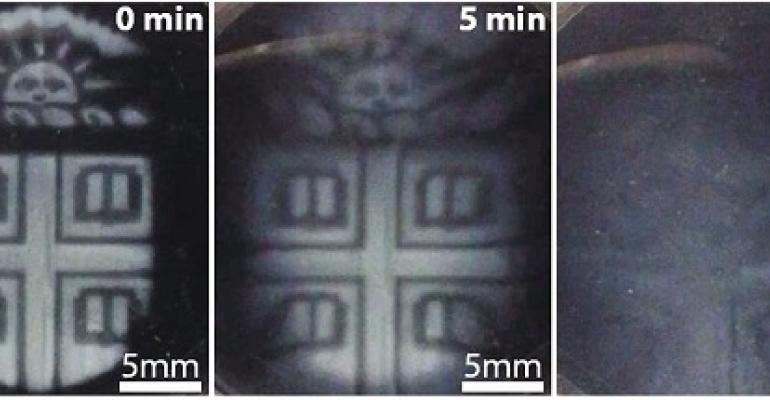 Researchers at Brown University have demonstrated a 3D-printing technique for fabricating “smart” biomaterials that can respond to stimuli, self-heal, and degrade on demand, paving the way for a number of next-generation medical and other applications.

Ian Wong, an assistant professor in Brown’s School of Engineering, led the research to develop the materials, which uses a new type of printing method and a biomaterial called sodium alginate--a compound derived from seaweed--that acts like a synthetic polymer, he told Design News.

The work demonstrated structures that can be degraded away with a biocompatible chemical trigger, which Wong said could be useful to developing microfluidic devices, creating biomaterials that respond dynamically to stimuli, and in patterning artificial tissue.

“For tissue engineering, it may be possible to print blood vessel-like networks within a biomaterial that stimulate living cells with molecular gradients, flows, and forces,” he said. “In drug delivery, we could control the release of bioactive species by printing reservoirs with specific shapes and degradation rates.”

Wong and his team—which includes graduate student Thomas Valentin, with whom Wong began the work three years ago and who serves as first author--published a report on their work in the journal Lab on a Chip.

To fabricate the biomaterials, the team used the type of 3D printing called stereolithography—which uses ultraviolet laser controlled by a computer-aided design system to trace patterns across the surface of a photoactive polymer solution. In the process, the light causes the polymers to link together, forming solid 3D structures from the liquid. The tracing is repeated until an entire object is built from the bottom up.

Stereolithographic printing typically uses photoactive polymers that link together with covalent bonds, which are strong but irreversible. In their work, Wong and his colleagues aimed to create structures with potentially reversible ionic bonds, which had never been done before using light-based 3D printing. To achieve their goal, the team made precursor solutions with sodium alginate, which is known to be capable of ionic crosslinking, he said.

“Most light-based 3D printing occurs through covalent crosslinking of polymer resins, but we demonstrate the formation of reversible ionic crosslinks in a seaweed-derived biopolymer called alginate,” Wong explained. “This may permit 3D-printed materials that exhibit ‘smart’ and biomimetic properties such as self-healing or stimuli responsiveness.”

The team showed that alginate could indeed be used in stereolithography and that by using different combinations of ionic salts—such as magnesium, barium, and calcium--they could create structures with varying stiffness, which could in turn be dissolved away at varying rates. The work also showed a number of ways the temporary alginate structures can be applicable.

Wong said that 3D printing is a an inexpensive and quick way to fabricate the biomaterials, giving the researchers the ability to work more freely with them to optimize their application.

“Conventional prototyping and manufacturing are based on lithographic masks, tooling, or dies, which are time-consuming and expensive,” he told Design News. “3D printing allows us to digitally design a biomaterial structure and directly print it. We can rapidly optimize a prototype by going back and forth between the digital design and the printed structure.”

The team plans to continue experimenting with alginate structures to find ways to optimize their strength and stiffness properties, as well as control the pace of degradation, Wong said.

“We have demonstrated a proof-of-concept here, but we are working on improvements, [such as]: Can we improve the print resolution? Can we make the printed structures more mechanically robust?” he said.