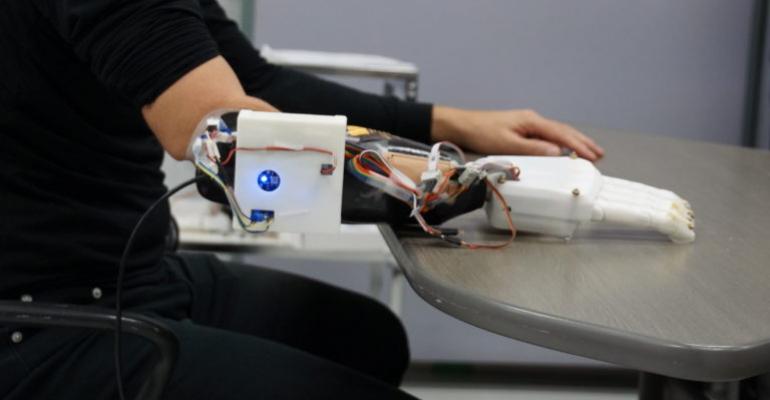 Researchers have been making great strides in recent years to make artificial limbs as close to the real thing as possible to help make life easier for amputees.

Now a team of researchers has added smart capabilities to a 3D-printed prosthetic hand that allows the device to learn and adapt to a wearer’s movement patters so they can perform daily tasks with more ease.

A team at the Biological Systems Engineering Lab at Hiroshima University Professor Toshio Tsuji in the Graduate School of Engineering developed the hand, which coupled with a computer interface is reactive to motion intent, he said.

The prosthetic is part of research that proves it’s possible to “combine the human body and machine like one living body,” Tsuji said.

“The patient just thinks about the motion of the hand and then robot automatically moves,” he said in a press statement. “The robot is like a part of his body. You can control the robot as you want.”

The team achieved this by mimicking how an ECG measures heart rate—putting electrodes in the socket of the prosthetic equipment to measure electrical signals from nerves through the skin. The technology sends the signals to the computer, which can decide how the hand can move in five milliseconds, sending those signals back quickly to the motors in the hand.

Researchers designed a neural network--called the Cybernetic Interface—that can recognize movements from the five fingers to combine them into different patterns. The movements they trained the hand to recognize include how to turn scissors into rock in the “rock, paper, scissors” hand game; pick up a water. However, the device can learn more to adapt to a user.

“This is one of the distinctive features of this project,” Tsuji said in the press statement. “The machine can learn simple basic motions and then combine and then produce complicated motions.”

The team published a paper on their work in the journal Science Robotics.

Researchers tested the prosthetic with amputee patients in the Robot Rehabilitation Center in the Hyogo Institute of Assistive Technology in Kobe, Japan. Through a collaboration with Japanese company Kinki Gishi, researchers also added a socket to accommodate the arm of patients to fit the device.

In the tests, seven participants performed a variety of tasks with the hand that they would do in their every-day lives, such as picking up small items or clenching their fists.

Researchers report that the hand performed with a high rate of accuracy in its similarity to the real-life movements, with 95 percent for simple motions and 93 percent for more complicated motions that had yet to be learned by the machine.

While the technology is promising, researchers acknowledged that it does have its limitations that they hope to correct in the future. Users reported muscle fatigue when wearing the hand for a long time, among other issues.

Researchers plan to create a training plan to help those wearing it to make best use of it as well as improve the technology itself before it goes to market, they said.