Machine Shops Peel Back on Metalworking Equipment Orders in January 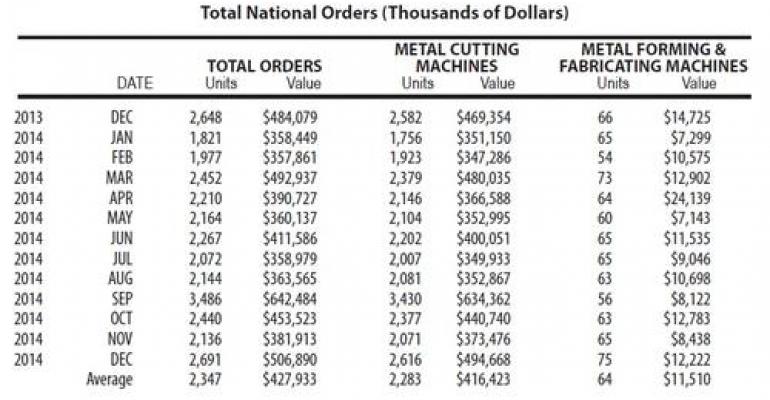 US orders for metalworking machinery began 2015 languidly after finishing off 2014 with a 3.1% expansion year over year, according to the trade group Association For Manufacturing Technology. Releasing its latest available data on Monday (March 9), AMT reported that January orders for metal cutting, forming and fabrication machinery fell 32.9% from December, practically wiping out that month's huge 32.7% gain.

"To understand why we saw this drop in orders for January, December 2014 saw a sharp increase in sales," said Doug Woods, AMT's president. "This was driven by many end-of-year orders that had been rushed through in order to qualify for tax rebate provisions that were enacted at the last minute for 2014." 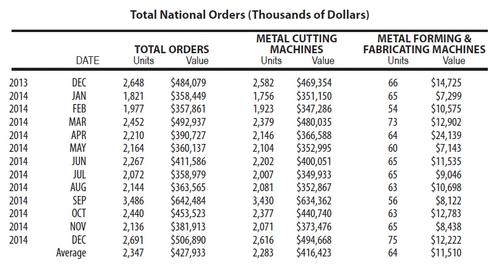 Woods added that the year-end buying rush by machine shops was aimed at "less expensive, in-stock machines that could be shipped quickly," based on the lower average order values the AMT's USMTO tracking program saw in December.

The January value of about $341.2 million in metalworking machinery sales was down 4.8% compared with January 2014. Out of four major regions of the country that AMT tracks, only the Northeast finished higher in sales in January compared with the previous month.

Total 2014 sales surpassed $5 billion, managing the feat in what was a seesaw year. A big part of the demand surge came from the International Manufacturing Technology Show (IMTS) in Chicago that AMT hosts every two years in September. That month, nearly 3,500 machines were ordered, at a value of more than $640 million.