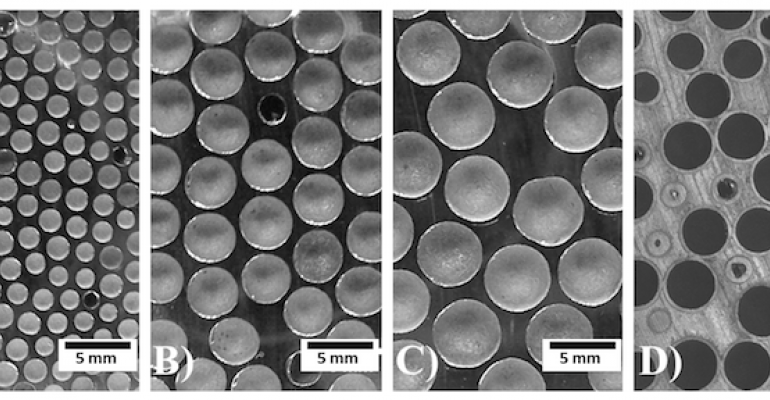 <p><strong>Body Armor</strong></p><p>Every hero needs protection. Black Panther has a special armor that absorbs and redistributes kinetic energy. And while nothing on par with that actually exists today, the real world isn't far off from it. Researchers at North Carolina State University have developed an armor made of <a href="https://www.designnews.com/content/lightweight-composite-foam-material-can-stop-bullets-well-steel/114687007961000" target="_blank">composite metal foam</a> that weighs half as much as metal armor but can stop armor-piercing .50-caliber rounds just as effectively.</p><p><em><em>(Image source: North Carolina State University)</em></em></p>
Researchers have developed a composite metal foam material that can stop bullets as well as steel armor but at half the weight.

Metal armor can protect police and military vehicles from bullets; however, it also makes them heavier and thus slower to move away from dangerous situations.

Now researchers at North Carolina State University have developed a lightweight alternative to metal armor in a composite metal foam (CMF) that can stop ball and armor-piercing .50 caliber rounds, as well as conventional steel armor at half the weight, they said.

Using the foam, researchers said vehicle designers can develop lighter military vehicles without cutting back on safety, or improve protection without added weight.

“The CMF armor was less than half the weight of the rolled homogeneous steel armor needed to achieve the same level of protection,” said Afsaneh Rabiei, a professor of mechanical and aerospace engineering at North Carolina State University who led the research.

Rabiei invented CMF and has spent years developing, testing, and optimizing CMF materials. CMF is a foam comprised of hollow, metallic spheres—made of materials such as stainless steel or titanium and then embedded in a metallic matrix made of steel, titanium, aluminum, or other metallic alloys.

In previous work, she and her team already demonstrated that CMF could block blast pressure and fragmentation as well as stop an M2 armor-piercing projectile   in performances comparable to standard metal armor. CMFs also have shown effectiveness at shielding metal form X-rays, gamma rays, and neutron radiation, as well as handling fire and heat twice as well as plain metals that comprise them, researchers said.

The CMF used in the current research is what’s called “steel-steel CMF,” which means both the spheres and the matrix are comprised of steel, she said.

Rabiei’s team fabricated a hard armor system that included a ceramic faceplate, a CMF core, and a thin back plate made of aluminum. They tested the armor using .50 caliber ball and armor-piercing rounds fired at impact velocities from 500 meters per second up to 885 meters per second.

“In other words, we were able to achieve significant weight savings—which benefits vehicle performance and fuel efficiency—without sacrificing protection,” Rabiei said. Researchers published a paper on their work in the journal Composite Structures.

While the research proves CMF’s promise for use in designing and developing vehicle armor, Rabiei said there still is room for improvement in the material design itself.

“These findings stem from testing armors we made by simply combining steel-steel CMF with off-the-shelf ceramic face plates, aluminum back plate, and adhesive material,” she said. “We only optimized our CMF material and replaced the steel plate in standard vehicle armor with steel-steel CMF armor. There is additional work we could do to make it even better.”

Next steps include to optimize the adhesion and thickness of the ceramic, CMF, and aluminum layers, which Rabiei said may lead to even lower total weight and improved efficiency of the final armor for a wider range of applications.

“CMFs hold promise for a variety of applications: from space exploration to shipping nuclear waste, explosives and hazardous materials, to military and security applications, and even cars, buses, and trains,” she said.