It Takes a Village to Create Solid Electrolytes 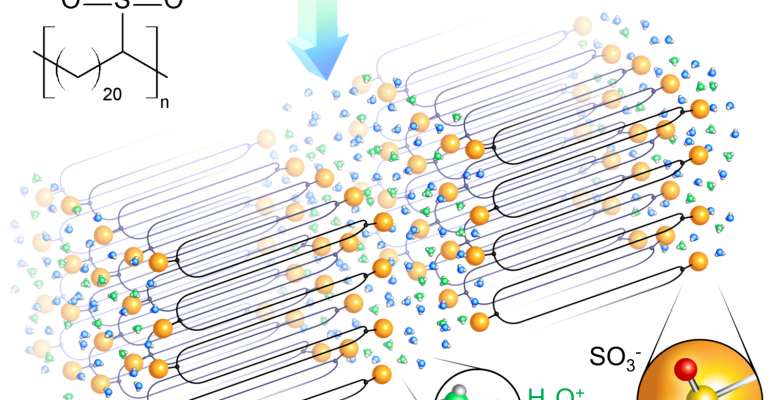 Universities and research labs around the world are working together to create better solid electrolytes to bring us beyond the current lithium ion battery technology.

It is becoming evident that moving beyond lithium ion batteries is going to require the combined efforts of research labs and battery manufacturers around the world. The extent of such collaboration was made clear in a recent press release from the University of Pennsylvania, detailing research into a solid electrolyte for use in lithium metal batteries.

The anode side of a lithium ion battery is made from layers of graphite. Lithium ions are inserted between the material’s layers during charging and are released during discharge. Battery researchers realize that replacing the graphite anode with metallic lithium would allow many more lithium ions to flow during discharge, producing a battery with at least twice the capacity. But during the charging stage of a lithium metal battery, spiky crystalline structures, called dendrites, form on the metal surface. These dendrites can grow through the liquid electrolyte, reaching the cathode and shorting out the battery.

A worldwide search is on for a solid or semi-solid electrolyte that can prevent dendrite growth while allowing the easy passage of lithium ions without conducting electrons.

One possibility that has received great attention is the use of an electrolyte made from a polymer material. Such a material is called a solid polymer electrolyte (SPE). This is the approach taken by the research group at the University of Pennsylvania. The starting point for the team was Nafion, a sulfonated tetrafluoroethylene-based copolymer that allows the passage of positive ions (cations) without allowing the transmission of electrons. Nafion is commonly used as a proton exchange membrane (PEM) in hydrogen fuel cells.

“Nafion is something of a fluke,” explained Karen Winey, chair of the Department of Materials Science and Engineering at the University of Pennsylvania, in the press release produced by the university. “Its structure has been the subject of debate for decades, and will likely never be fully understood or controlled,” she added.

Because the polymer Nafion has a structure that is random and disordered, it is difficult to study. It contains side chains that occur randomly and that end in sulfonic acid groups. The sulfonic acid draws in water. This process forms channels through the polymer that allow cations to flow through the material. But the pathways for these positive ions are a convoluted maze. If the path could be made more direct, the transport of lithium ions through the polymer electrolyte could be quicker and more efficient.

That’s where the collaboration came in. The University of Pennsylvania group, under Winey, worked with a group at the University of Florida, under Kenneth Wagener. They have developed a new structure that places sulfonic acid groups at an even spacing along the polymer chain. Their approach results in many parallel acid-lined channels through the polymer, which act like a superhighway for lithium ion flow. The structure was determined from another collaboration—this time with Mark Stevens of Sandia National Laboratories.

The chains in the resulting structure form a series of hairpin shapes with a sulfonic acid group at each turn. This allows the polymer to assemble into orderly layers and results in straight channels, rather than the meandering maze structure of the unmodified Nafion. Cationic transport through the modified material is much faster. “We’re already faster than Nafion by a factor of two, but we could be even faster if we aligned all of those layers straight across the electrolyte membrane,” said Winey in the press release.

Build Us a Village

The goal is a solid electrolyte that will be safer than the flammable electrolytes that are presently used. At the same time, lithium metal batteries with solid polymer electrolytes might be both lighter and thinner. Such batteries would also have twice the capacity and the ability to recharge faster than today’s commercial lithium ion batteries.

Beyond the collaboration with the University of Florida and Sandia, additional contributions from researchers at the French National Center for Scientific Research, the French Alternative Energies and Atomic Energy Commission, and the Université Grenoble Alpes were noted in the University of Pennsylvania’s press release. The extent of this worldwide collaboration is an indication of how the search for improved battery materials and performance has become global in its scale.

Additional information on electrolytes, including a presentation by SolidEnergy Systems about its semi-solid electrolyte battery will be available at The Battery Show in Novi Michigan on September 11-13.