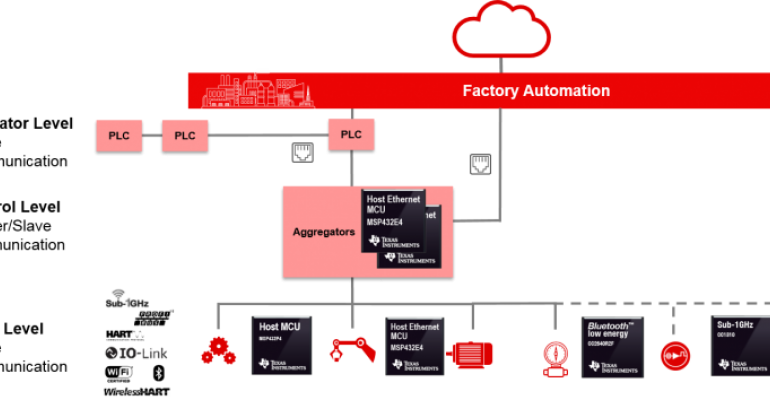 A new family of microcontrollers (MCU) from Texas Instruments Inc. promises to simplify the process of creating wired and wireless sensor networks for factory automation, building control, and other IoT applications.

SimpleLink MSP432 Ethernet MCUs are said to help design engineers by enabling them to more easily create Ethernet-based gateways, which are going to be increasingly important for applications with large numbers of sensors. “We solve the Ethernet hardware problem for our customers by putting everything into a single chip,” noted Dung Dang, product marketing engineer for Texas Instruments. “So they can shrink the size of their (circuit) board, spend less time debugging their layout, and spend more time focusing on their application.”

The new MCUs are based on a 120-MHz ARM Cortex-MF4 core. They are said to reduce design time and simplify board layout because they incorporate the Ethernet physical layer (PHY) and medium access control (MAC), along with USB and CAN. By integrating the MAC and PHY, in particular, the MSP432E411Y MCU eliminates the need for the developer to lay out a board with as many as 20 external components in order to accommodate Ethernet.

“By putting all that inside the chip, we’ve made it easier for the developer,” Dang told Design News. “So they don’t have to worry about all the intricacies of Ethernet IP.”

TI engineers believe the timing is right for the introduction of an integrated Ethernet MCU, given the rapid growth of the IoT. By the end of 2017, more than eight billion devices are expected to be connected to the Internet. That number is expected to climb to more than 20 billion in 2020 and 75 billion in 2035. As a result, experts expect end-users to have a correspondingly greater need to manage and process data from sensor nodes, and to transfer information to cloud-based servers.

“There are going to be more nodes,” Dang said. “They’ll be more complex and they won’t all speak the same languages. So you’ll need intelligent Ethernet gateways to help manage it.”

The Ethernet MCU is part of TI’s SimpleLink MCU portfolio, which helps developers create connected products. The new Ethernet MCU is aimed at building control, factory automation and grid infrastructure applications, all of which are expected to have large numbers of so-called “edge nodes.”

With the introduction of the new Ethernet MCU, the company is counting on the fact that future developers will want to spend more time concentrating on those edge nodes, and less on Ethernet IP. “With this, you can accelerate your development time, and get a robust and reliable gateway up and running,” Dang said. “That way, you can spend more time differentiating your application.”