Manufacturers Gain from IoT But Slip on Security 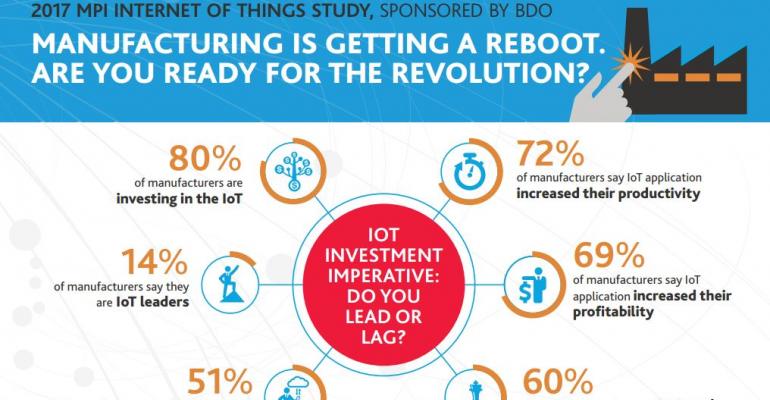 BDO finds that manufacturers are already claiming big gains with IoT, but they’re falling behind on cybersecurity and missing opportunities to take R&D credits.

According to the data from a recent study, manufacturers are seeing significant gains in productivity and profitability from using IoT technology. Yet the study also found manufacturers are overlooking two critical pieces that could derail their progress: cybersecurity and R&D tax credits. 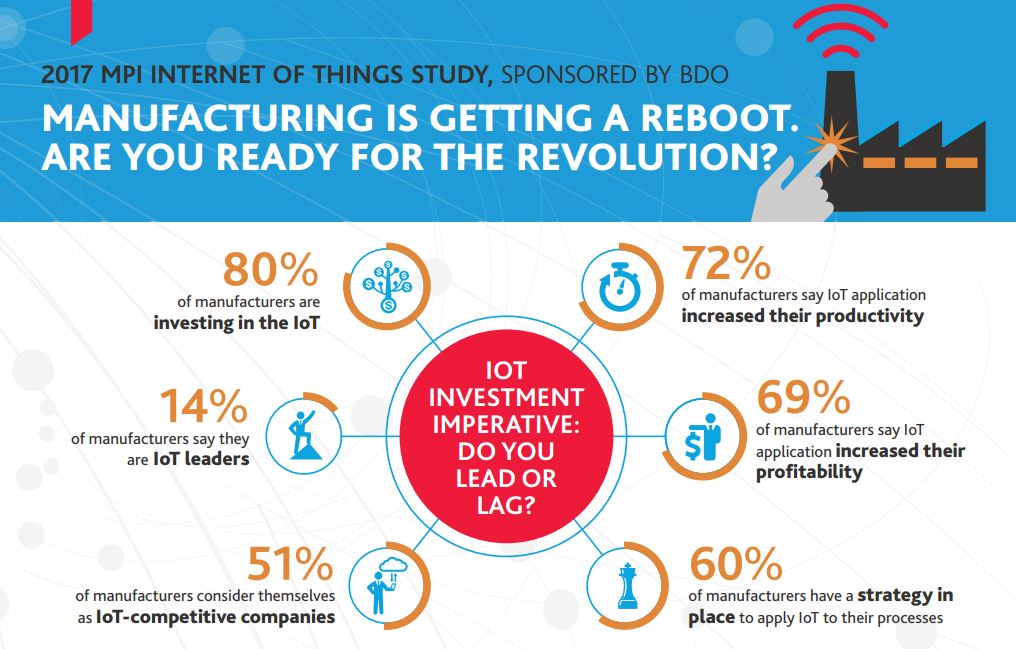 The IoT study – conducted by the MPI Group and sponsored by BDO – surveyed 374 global manufacturers on their readiness to incorporate smart devices and embedded intelligence within their plants and into their products. “The survey provides a gauge of IoT awareness and readiness among manufacturers and assesses the strategies and actions they’re taking to incorporate the IoT into business processes and products,” Rick Schreiber, manufacturing lead at BDO told Design News. “The goal is to shed light on the potential the IoT offers manufacturers in terms of growth and profits, as well as the new business risks it introduces.”

This is the second year of an annual study. Year-over-year results revealed a marked increase in IoT awareness and preparedness among manufacturers. “In last year’s study, few manufacturers had a strategy in place to apply IoT technologies. One-third didn’t even have plans to develop a strategy,” said Schreiber. “In addition, 67% of respondents reported no or limited companywide understanding of the IoT.”

That percentage dropped to 31 percent this year. The percentage of manufacturers with no plans to develop an IoT strategy dropped to just 13 percent. “Based on these huge drops, we think the IoT is finally on the radar for manufacturers.”

While manufacturers are initiating IoT programs and deriving benefits, they are still on a learning curve, trying to discover the best use and best practices of connectivity. “The IoT is still largely uncharted territory. All industries, not just manufacturers, are still trying to identify the benefits and risks,” said Schreiber. “Innovation doesn’t come cheap. Many manufacturers recognize that the IoT and the disruptive technologies it enables are the future of manufacturing, but they aren’t sure they can afford to make the investment.”

Biggest Gains May be in Manufacturing Processes

While many manufacturers are grabbing a market edge by enabling IoT in their products, BDO analysts noted that the largest benefits from IoT may be in the plant rather than in products. “Enabling IoT in manufacturing processes is where we’re seeing some of the biggest opportunities for growth and innovation,” said Schreiber. “About half of plant processes are currently managed via the IoT, up from an average of 31 percent in 2016.” He noted that a hearty 81 percent of manufacturers are planning to increase their IoT plant and process investments in the next two years.

Schreiber pointed out that connected plant processes are part of a larger effort toward advanced manufacturing. “The Internet of Things is just the first piece of a much larger puzzle,” said Schreiber. The IoT has the potential to transform manufacturing because of the additional technologies it enables – machine-to-machine communication, machine learning, robotics, virtual reality, 3D printing, and more.”

Bringing Cybersecurity into the Mix Too Late

While more than two-thirds of manufacturers report productivity and profitability gains from the IoT just in the last year, the vast majority may be overconfident in their cyber-risk-management programs to protect their IoT enabled products. BDO analysts noted that a statistically significant number of manufacturers don’t start thinking about cybersecurity until their products reach the quality control or marketing stage.

“The end-user tends not to think about the security risk to their personal information until after it’s been compromised,” Shahryar Shaghaghi, cybersecurity expert at BDO, told Design News. “If the security measures feel like a burden, there are a lot of consumers who will jump ship to a less secure but more user-friendly competitor.

Cybersecurity within products is most effective when it’s designed-in at the earliest stage of design. “The challenge for manufacturers is balancing security with product innovation and ease of use. That’s why cybersecurity needs to be a consideration from the design phase onward,” said Shaghaghi. “If you tack on security controls as an afterthought, you’re not thinking about how it impacts the overall user experience.”

READ MORE ARTICLES ON THE INTERNET OF THINGS:

Shaghaghi cautioned that the worst is yet to come with IoT cybersecurity. “Hackers are just beginning to experiment with harnessing the power of the IoT to wage attacks. And even the most sophisticated cyber-defense technology isn’t impenetrable, so early breach detection and a tested incident response plan are key,” said Shaghaghi. “A good cyber risk management program assumes hackers will, sooner or later, successfully breach the barriers and thus they focus on mitigating the impact.”

Missing Out on Tax Credits

While most manufacturers are already making major investments in IoT technologies, BDO noted that more than half are not claiming any of the available tax credits and incentives that are designed to help manufacturers finance these initiatives. “Lack of awareness seems to be the biggest issue,” said Schreiber. “Thirty-seven percent of respondents said they weren’t aware of any tax credits or incentives available for their IoT investments.”

He noted that among those who are aware of R&D credits, the biggest reason companies are not planning to claim those credits is they believe the expected benefit is too small. “Last year, among those who claimed R&D tax credits, each manufacturer’s average benefit exceeded $1 million,” said Schreiber. “No matter how you slice it, $1 million represents significant cost savings.”