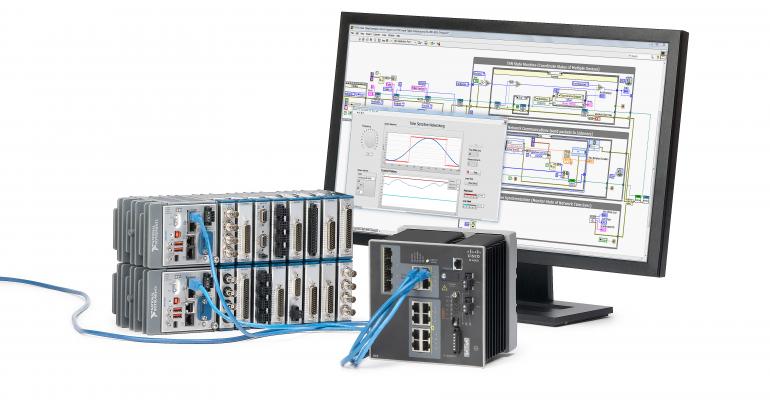 A group of leading automation and information technology suppliers are committed to adopting a system architecture that uses the OPC Unified Architecture (OPC UA) over Time-Sensitive Networking technology (TSN) to extend unified Industrial Internet of Things (IIoT) communication to the controller level.

ABB, Bosch Rexroth, B&R, CISCO, General Electric, KUKA, National Instruments, Parker, Schneider Electric, SEW Eurodrive, and TTTech are jointly promoting OPC UA over Time Sensitive Networking (TSN) as the unified communication solution between industrial controllers and to the cloud, according to an announcement at the most recent SPS Show. Based on open standards, this solution “enables industry to use devices from different vendors that are fully interoperable. The participating companies intend to support OPC UA TSN in their future generations of products.”

The logic behind the group’s announcement is that industrial automation solutions have traditionally been differentiated and separated from one another by different incompatible and non-interoperable standards used for communication between devices. But the downside has been that users have often found themselves locked into proprietary ecosystems. Vendors have developed multiple versions of essentially the same product to support these ecosystems, but this has been limiting innovation and the integration of new solutions, with customers not being able to optimize their automation solution to its full value.

Support for OPC UA over TSN

“OPC UA has broad support from a massive number of different companies and is one of the most broadly supported IoT technologies. It offers an excellent data model on top of the base technology which, along with the configuration and protocol pieces, adds a lot of value as well,” Todd Walter, Chief Marketing Manager for National Instruments and AVnu Alliance Industrial Segment Chair told Design News during a recent interview. “This technology, along with the Pub Sub capabilities and a new transport where TSN can be implemented to provide deterministic communications and interoperability between devices, has a lot of promise to it.”

Walter noted that the development of TSN has been consistently built over the last few years starting with the work done through IEEE to develop the base standards, and then work done by AVnu to decide which pieces to use, how to use them and conformance interoperability issues. But even all of that foundational work only assures the network can be used in a common way but not that if a customer buys a controller from one company and an actuator from another that they will be able to work together. Devices would be able to use the same network but there is still a need for a next layer to define how the end devices are configured, how to actually pass the data and the protocol itself.

“OPC UA technology along with TSN makes interoperability a reality and helps bring together the IT and OT pieces to enable the Industrial Internet of Things and Industry 4.0,” said Arun Veeramani, Senior Manager - Product Management at National Instruments. “With OPC embracing Publish-Subscribe technology which allows it to provide a good infrastructure to integrate embedded devices with the IT world and the cloud, it is good to see many companies coming together and endorse TSN over OPC UA as a solution.”

The Publish Subscribe component is a key technology but now the addition of OPC UA over TSN will create a transport mechanism over TSN networks. The announcement is essentially companies coming together and validating TSN and OPC UA over TSN as one of the ways people can make interoperability and the IIoT a reality. But Veeramani also points out that there has also been additional work done, inside the OPC foundation, and a TSN technical working group working for over 18 months to make sure that TSN gets co-opted in the right way.

“In addition to machine to machine communications where TSN plays a key role, there is also a lot of interest in machine-to-cloud interfaces where OPC UA Pub Sub takes over and allows machines to communicate to the cloud. To create IT and OT convergence in a meaningful way, the technology creates a powerful mechanism for enhanced enterprise connectivity,” Veeramani added.

The Pub Sub draft available for review at the end of 2016 will not include a TSN transport yet, and that will need to be a future revision. The document in final review includes support for UDP and AMQP for now but, in the future, additional transports including TSN can be added when the development work is complete.

”These controllers also tend to be devices that have more budget available in terms of processing power and software stacks which makes it a good place for OPC UA to start developing solutions,” he added. “TSN as a technology can certainly support very high loop rates and multi-kilohertz motion control loop rates over the network. It’s more as you put the whole picture together, where do you start?”

Many of the companies involved in the development of the OPC UA over TSN technology are participating at multiple levels starting with IEEE but also the AVnu Alliance, the OPC Foundation and also the Industrial Internet Consortium (IIC). Within the IIC, two of their primary activities are testbeds and then, out of the testbeds, reference architecture documentation.

There is currently a TSN for Smart Manufacturing testbed that National Instruments showed at SPS and is hosted at NI’s headquarters in Austin, Texas. Many of the participating companies are bringing prototypes and data products together to make sure the system achieves the right level of interoperability. There is still a lot of work which has to happen both in the OPC UA working groups to ratify the right standards, before companies can complete the development of products.

“What we are seeing is a lot of enthusiasm among the eight companies that participated in that event, and are saying we are willing to build these products,” Walter said. “We are seeing what I would call a ‘parallelization’ where we are writing the standards while at the same time trying to implement to them. That assures that when the standards are done, they will work well and also that we get the products out as soon as possible.”

Other major pieces which need to be solidified include performance interoperability testing and getting test houses setup to validate new products. AVnu is planning to have its tests out for the network switches in 2017, so switch vendors will be able to get switches certified, and there is also need to handshake with the OPC Foundation because end devices will have both network capabilities and higher level connectivity. That is one of the pieces that AVnu and OPC Foundation are collaborating on to make sure that there is a one-stop shop for end device certification.

The goal of the companies that are part of the announcement is for an open, unified, standards-based and interoperable IIoT solution that can provide deterministic and real-time peer-to-peer communication between industrial controllers and to the cloud. The cooperation considers OPC UA TSN as the unified standard for industrial automation and IIoT connectivity. OPC UA TSN is the combination of enhanced OPC UA Publisher/Subscriber (Pub/Sub) technology with the IEEE TSN Ethernet standards. It provides all of the open, standard building blocks required to unify communication for industrial automation and it enables the broad convergence of information technology (IT) and operation technology (OT) that is fundamental to realizing the Industrial Internet of Things and Industrie 4.0.

The companies intend to support OPC UA TSN in future generations of their products. But first, pilot products are already being integrated in an IIC testbed. The objective is to show compatible controller-to-controller communication between devices from different vendors using OPC UA TSN over a standard IT infrastructure. Other companies that share this common vision of unified communication between industrial controllers and to cloud are welcome to join and contribute to this collaboration.

National Instruments has already released, for selected customers, a version of its CompactRIO controllers that supports TSN. It supports the technology at a foundational level but customers are able to build on top of that all kinds of protocols. That technology is being implemented in the TSN smart manufacturing testbed and, as different protocols are implemented, there is an intention to support those in the future as well.