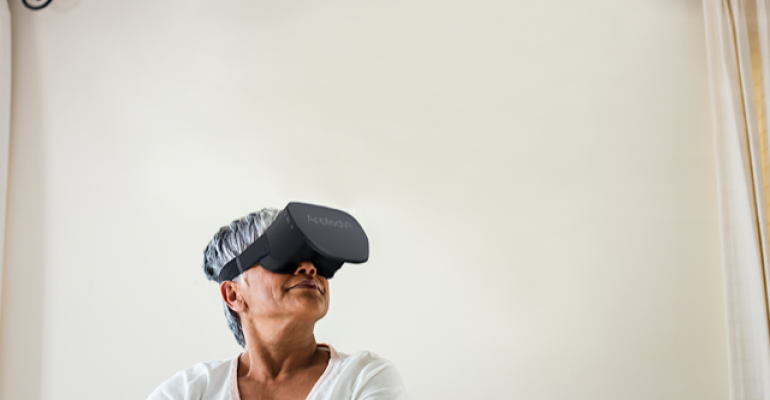 With the increasing number of deaths resulting from opioid abuse there is a strong need alternative solutions to treat pain. One medtech company is helping to fill this void by dipping into virtual reality.

AppliedVR has been granted FDA de novo approval for EaseVRx, to treat chronic low back pain. The Los Angeles, CA-based company’s EaseVRx is a prescription-use medical device with preloaded software content on a proprietary hardware platform that delivers pain management training based on cognitive behavioral skills and other behavioral methods.

“We developed a program that patients could follow on their own in the home, consisting of 56 modules over eight weeks,” Josh Sackman, co-founder and president of AppliedVR, told MD+DI. “On average patients spend about six or seven minutes a day and they go through these skills training exercises.”

Approval for the device comes a year after EaseVRx won breakthrough device designation. It also comes at a time when conditions were highly favorable for the technology to thrive.

“Going into the process there was a lot of trepidation going into the process, especially for someone like myself who didn’t come from healthcare,” Sackman said. “I’ve worked in consumer health but have never had to navigate through that process before. There were concerns of all the blocks, challenges, hurdles we would have to face to convince this very traditional agency of why they needed to consider a new type of medicine in a way.”

He added, “it was actually quite the opposite. I think it’s because we’ve had the tail end of this opioid epidemic the last several years. They’ve launched the opioid innovation challenge and mixed reality workshops and AI workshops. The pandemic certainly changed how medicine was practiced and how patients accessed new modalities of treatment. So, FDA came to us with a lot of openness, curiosity – asked a lot of questions. They were truly allies in the process.”

AppliedVR's FDA submission was supported by two randomized controlled trials, evaluating the effectiveness of a VR-based program for self-treatment of chronic pain at home. Both studies concluded that a self-administered, skills-based VR treatment program was not only a feasible and scalable way to treat chronic pain, it also was effective at improving on multiple chronic pain outcomes.

The de novo approval also comes on the heels of the company raising $36 million in a series B round. AppliedVR has raised a total of $71 million.

Sackman spoke about what the financing would be used for and plans for the upcoming year.