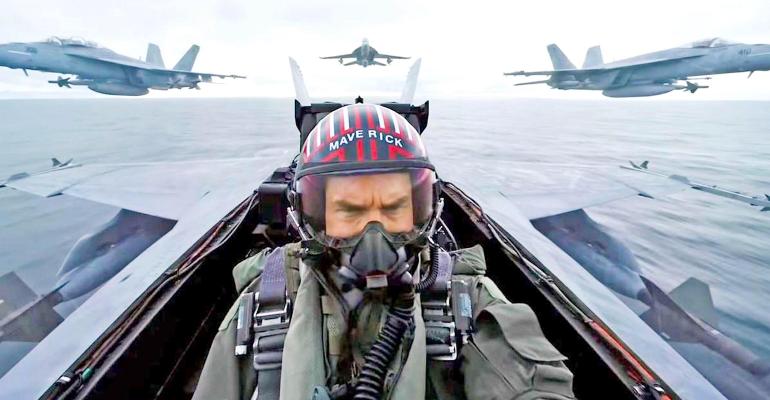 Start Slideshow ›
Tom Cruise is back in the cockpit as Pete "Maverick" Mitchell for the movie sequel.
Tom Cruise still likes flying jets and fans still like seeing them.

After a two-year pandemic-induced delay, Top Gun: Maverick has finally hit theaters, giving aviation fans another chance to ride along in the cockpit with naval aviators in sleek fighter jets.

The film is a sequel to the beloved, if poorly regarded, 1986 classic action film, revisiting Pete “Maverick” Mitchell (Tom Cruise) three decades later. While that first movie was the cinematic equivalent of today’s “yacht rock” music, critically derided but ironically enjoyed now by a generation who wasn’t alive when it debuted, the sequel aims higher.

The stronger script flies clear of the old movie’s cheesiness according to reviewers who have rewarded it with a 97 percent fresh Rotten Tomatoes score. This compares to the first movie’s dismal 56 percent rotten score.

Today, we find Maverick training a detachment of Top Gun graduates for a specialized mission the likes of which no living pilot has ever seen. Along the way, he encounters Lt. Bradley Bradshaw (Miles Teller), call sign: “Rooster,” the son of Maverick’s late friend and Radar Intercept Officer Lt. Nick Bradshaw, “Goose.” Tense posturing and dramatic flight sequences ensue.

Chicago Tribune critic Michael Phillips addressed the cognitive dissonance of a good version of a bad movie. “It may help to have hated the original, but I liked this one, even though it’s not so very different from the first,” he said.

At 2 hours 17 minutes, “Maverick” is more than half an hour longer than “Top Gun” but it doesn’t bog down, according to Slate’s Dana Stevens. “The dialogue charms, the aerial sequences soar, and the two hours and 17 minutes of runtime speed by at (forgive me) Mach 10,” she said.

This is the cast, so you can get acquainted with who you’ll see in the film, and each of the main characters has an introductory video below. Click through the slide show for a look at scenes from the film and its making.