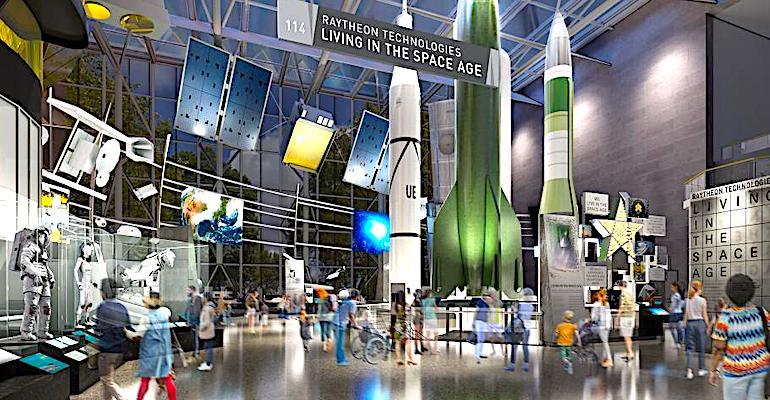 Start Slideshow ›
The popular Smithsonian National Air and Space Museum is preparing an exhibit that examines the impact of space travel on society.

As the Smithsonian Institution’s National Air and Space Museum continues its renovation, it has released details on a planned post-renovation exhibition, Raytheon Technologies Living the the Space Age, which will open in 2025.

The plan is for it to examine the impact of the space age, which began in the mid-20th century, by looking at the people and objects of the time.

An intercontinental missile pit underscores the reality behind the feverish work that nations poured into rocketry during the era, while other objects will stretch upward in the two-story space.

It starts with the World War II German V2 rocket, which served as the foundation for both the U.S. and Soviet rocket programs. It is joined by three larger subsequent missiles that could carry nuclear weapons to the other side of the world. Accordingly, there is a Civil Defense Siren in the exhibit that was once used to alert a population to Civil Defense drills.

The exhibit’s goal is to foster conversation among visitors and spark new questions and ideas to help promote understanding of the consequences and vulnerabilities of these Space Age technologies.

In addition to the V2 and ICBMs, the exhibit will show U.S. Skylab Orbital Workshop, models of massive navigation and communications satellites, the Structural Dynamic Test vehicle of the Hubble Space Telescope and some of Hubble’s actual instruments that were returned to Earth after repair missions. The Skylab exhibit is a popular one, as visitors are able to walk through the back-up example of America’s first space station to see how astronauts lived in space during the 1970s.

While the term “Space Age” evokes thoughts of astronauts and their flight vehicles, this era saw the rapid adoption of automated satellites that relay communications and photograph the earth. The Global Positioning System navigational network might be the most important orbital technology due to its easily overlooked but pervasive influence on daily life. The exhibit will explain how the GPS system has expanded over time from primarily military use to today’s casual civilian applications.

The three human stories spotlighted by the exhibit include a Jewish engineer in the Soviet Union, who led an obscure laboratory and overcame entrenched antisemitism to become the chief designer for outfitting cosmonauts through the Cold War and beyond; a woman whose work for a Navy contractor pioneered the calculations that made our Global Positioning Satellite system possible; and a young man whose job guarding nuclear missiles in Montana gave him new perspectives on protecting Earth and space environments from the increasing debris that humans have deposited in orbit.

The National Air and Space Museum’s position as Smithsonian’s most popular and as one of the most-visited museums in the world will ensure the opportunity for many visitors to gain insight into how spaceflight has influenced society and changed the world.