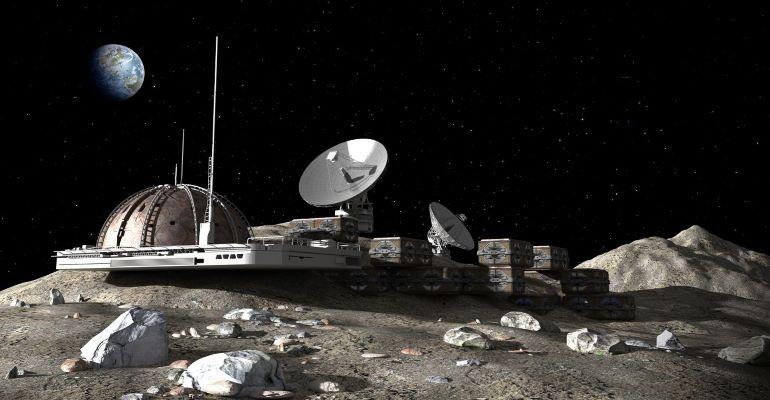 The key challenge of establishing a lunar colony such as the one illustrated here is the availability of a reliable, redundant power grid, said NASA scientist John Scott.
At APEC, a NASA scientist discusses the challenge of powering a manned lunar station.

It’s been a long time since any astronauts have visited the moon, but that is likely to change as efforts are underway to set up a permanent outpost on the lunar surface within a few years, according to John Scott, Principal Technologist, Power and Energy Storage, NASA Space Technology Mission Directorate.

Speaking during the plenary session at the Applied Power Electronics Conference in Houston, Scott emphasized that the establishment of a reliable power grid is key to the lunar colony operating safely and without disruptions.

The outpost is part of the Project Artemis program, which will establish a lunar colony on the moon for men and women to explore the lunar surface. The information learned from daily moon exploration will be the springboard for an eventual manned mission to planet Mars.

Scott noted that the initial lunar outpost will be at Shackleton Crater, a large crater near the Moon’s south pole. As photovoltaic power will be used to power the lunar colony, wisely harvesting solar energy will be key to the effectiveness of powering the facility.

The location of the lunar colony at the crater will be critical as illumination is topology-dependent. While the peaks of this large crater receive generous sunlight, the inside of the crater receives no sunlight.

“It can be dark for a few days at a time, and only a few hours of sunlight will be available on many days,” Scott said.

Scott explained that establishing a working power grid on the lunar surface is a bit different than on earth. “On earth, you need to tradeoff specific power, operating and installation cost, greenhouse gas emissions, and of course public safety. On the moon, specific power is the main requirement.”

The absence of an atmosphere or humans other than those assigned to work in a lunar outpost does not make power grid development any easier, however. “Development cost is a consideration, and mission reliability which is verifiable redundancy. You need two independent power streams to maintain safe operation in space,” Scott said.

A power grid for the lunar colony would likely require photovoltaic arrays, a fission power plant, regenerative fuel cells, and cable power beams, Scott noted. “You need reliable power electronics that can withstand lunar dust, as well as withstand the impacts of radiation. The problem for circuits is single-event effects which can affect logic states and cause damage.” He added that research is underway on technologies such as GaN (Gallium Nitride) and SiC (Silicon Carbide).

Once the colony is established, Scott said the scientists will explore not only the composition of the lunar surface but what could be underneath. He added there may be ice below the lunar surface that could be extracted, but how much and how difficult the frozen water would be to extract is unknown.