Model Facts: What you Didn’t Know About the Star Trek USS Enterprise Design 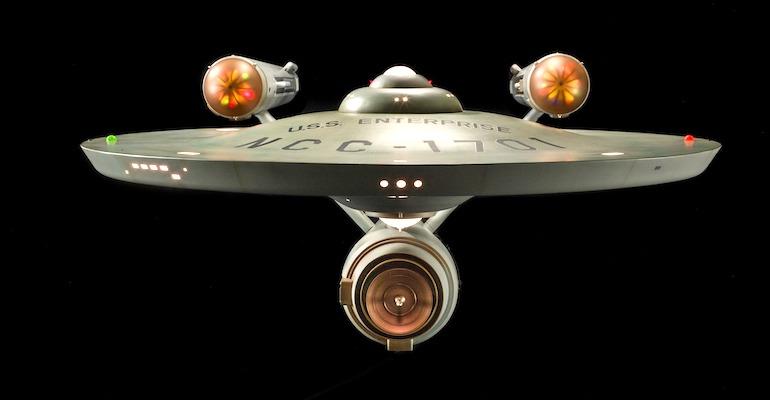 But it was Shatner's fictional travels in the Enterprise that inspired Bezos to build Blue Origin, so from that perspective, it was Shatner who contributed to making it possible for Bezos to fly to space when he flew on the previous mission.

Related: What Star Trek Can Teach Us as Engineers

"I'm so filled with emotion about what just happened. It's extraordinary"

At 90, Shatner became the oldest person yet to fly to space.

“What you have given me is the most profound experience I can imagine,” Shatner told Jeff Bezos upon his return. "I’m so filled with emotion about what just happened. It’s extraordinary. I hope I never recover from this.”

In honor of the occasion, we've compiled a gallery of photos of the 11-foot model of the USS Enterprise employed for special effects photography in the original show.

The science-fiction spaceship completed its stated "five-year" mission a little early, in 1969, so Paramount donated the historic model to Smithsonian in 1974. Smithsonian's National Air and Space Museum exhibits the famous fictional spaceship now and provided these photos of it. You can also see photos of the Enterprise's foe, the Klingon D7 Battle Cruiser model at Smithsonian in this article.