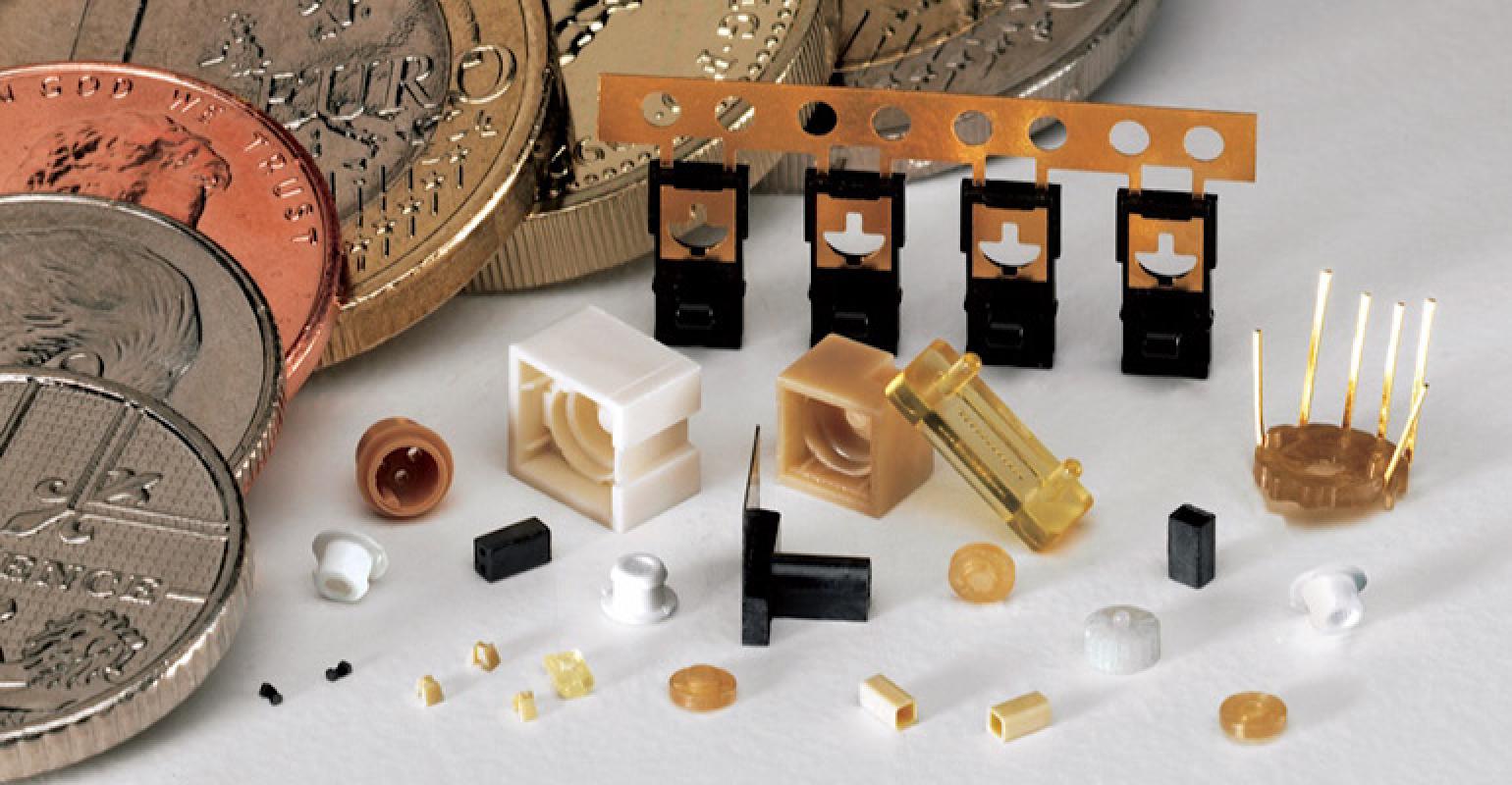 In a BIOMEDigital session on miniaturization, an expert from Accumold showed this example of a variety of micro lenses and mirrors used in imaging, sensing, and medical applications.

Medical devices are getting smaller, less invasive, and more advanced. From a product development and manufacturing perspective, the desire to go ever smaller creates some big — but not unsurmountable — challenges. Miniaturization was a common theme across several BIOMEDigital sessions on Monday.

“Sometimes there’s this clear objective. You know you want to do X moving forward, and you know there’s growth beyond that next hill, and you can kind of see beyond the horizon, but we don’t always know what’s in the way — what’s around that corner," said Aaron Johnson, vice president of marketing and customer strategy at Accumold. "When it comes to innovation there’s the whole concept something new, something that hasn’t been done before … but we know if we could just do X maybe we could get to a place where we have a break-through or we could provide so much value to our customers.”

Johnson noted several common challenges that can stand in the way. Sometimes a competitor simply beats you to the punch. Sometimes the technology you need just hasn't caught up yet, such as a widget or a component.

“A lot of the challenges that we have in innovation around miniaturization is energy storage, batteries,” Johnson said, citing hearing aids as an example.

For obvious reasons, hearing aid manufacturers are constantly trying to make their products smaller and more functional, but battery storage has restricted just how small these devices can go.

"You want to have something that lasts a particular amount of time, today’s technology only affords a certain amount of size versus that tradeoff," Johnson said.

Miniaturization tip #1: Be open to the possibilities

Johnson shared a story about a conversation he once heard at a trade show. One person was explaining that their contract manufacturer had told them that what they were trying to accomplish was not possible. As he listened to the conversation, Johnson realized that what they were trying to accomplish actually was possible — or at least plausible. He used this as an example of how sometimes in product development, "the path to get there is hindered by what we don't know."

"Sometimes it's up to us to push our organizations beyond the 'well, they're not part of our supplier base,' or 'that's not something that we know about,' to help our organizations to learn about ways to do new things," Johnson said.

"Most people don't like change, or change causes other challenges in the workplace so it can be a barrier, but when it comes to pushing the limits in innovation, the one that we can really help get out of the way is when we understand what new technologies or using old technologies in a new way can do for us," Johnson said.

When it comes to miniaturization itself, he said, the main challenge is figuring out how to do more in the same space, or more in less space. In other words, Johnson said, "how can we put more functionality into the same size, or a smaller size?"

Often, he said, micro injection molding is the answer. Or at least a start.

Miniaturization tip #2: Start with your ideal in mind

"I once had a design engineer tell me that every product he designed was as big as his monitor," Johnson said. "But then when you start to look at it in reality and see the size and shape as it compares in the real world, you start to recognize, 'wow, that is really small, that is really thin.' Knowing how to push those limits can be very important and can make or break the success of your project."

So it's best to design what you need, and then have a conversation with your micro molder to find out where you can push the limits, he said.

Understand the relationship between the material that you need and the feature performance at the micro scale, Johnson said, showing an example from a project Accumold worked on.

"We designed this part with a high-aspect ratio, very thin wall section, designed it with an optimal thick-to-thin aspect process ... to kind of give every material an ideal chance to meet the product," he said.

The company went to its resin suppliers and asked what materials they would recommend in order to make the product.

"All of our resin suppliers came back and said, 'none'," Johnson said. "We knew that was probably the case for some of [the materials] but we also knew that we could probably be successful with a few of them, and that's really ultimately what we found out. Of those 11 materials, four of them ran the full 42-to-1 aspect ratio."

Showing the audience how this plays out in a real-world situation, Johnson shared an example of a project involving an internal chassis for a hearing aid. In terms of micro molding, he said it is on the larger side at about 1.5 inches long, but it's an example of how micro molding can be about more than just the tiny nature of the part, but the features and other things going on in a complex product. In addition to opening in closing one direction, the part also has slides and two discreet battery pins and three metal inserts.

"But what makes this part special in the miniaturization trend is that it helped consolidate multiple parts into one large, complex component," Johnson said. "Originally this part had been designed in a couple different pieces and they were assembled and manufactured together, but here, in order to get more room on the inside, consolidating a couple parts together allowed them to share two wall sections, and thus reducing the two cavities on other side by that much more."

So sometimes miniaturization actually comes from making something bigger in order to fit more into the overall form factor, he said.

"This is an extremely good strategy when it comes to miniaturization," Johnson said. "Certainly the form factor reduction is a big part of it, but part consolidation is another huge step."

Along with that part consolidation step is over molding, he said, which is when you're combining not just two plastic pieces together but other materials like metal, glass, or fabric.

"Anything that can withstand the injection molding process, you can think about how could those pieces be over-molded together in order to create either a more robust manufacturing process, but ultimately give you an opportunity to do more on the inside, or to help you reduce those over form factors," Johnson said.