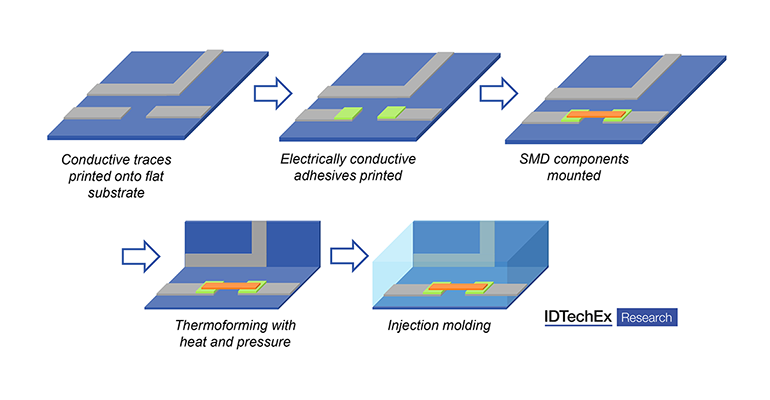 An extension of the in-mold decorating process, in-mold electronics’ initial applications will be in consumer goods and automotive interiors.

The integration of electronics within 3D structures is an increasing trend that offers a more sophisticated solution than the current method of encasing rigid printed circuit boards, according to independent market research firm IDTechEx. In-mold electronics (IME) is an emerging technology that enables electronics to be embedded in molded and thermoformed plastic components.

With the integration of capacitive touch, lighting, and haptics offering size and weight reductions of up to 70%, IME can efficiently produce curved touch-sensitive interfaces. Because of these benefits and with applications primarily in the automotive and consumer goods sectors, IDTechEx predicts that IME will become a $1.5 billion market by 2032.

IME can be viewed as an extension of the more common in-mold decorating (IMD) process, in which thermoforming plastic with a decorative coating is converted to a 3D component by injection molding. IME is an evolution of an existing technique, so much of the existing process knowledge and capital equipment can be reused.

Making a part using IME begins with screen printing of conductive thermoformable inks, followed by deposition of electrically conductive adhesives and the mounting of electronic components, such as LEDs, IDTechEx said. More complex multilayer circuits can also be produced by printing dielectric inks to enable crossovers.

Polycarbonate is generally preferred for the thermoformable substrate, according to Matthew Dyson, Senior Technology Analyst at IDTechEx.

“Covestro has developed a polycarbonate film that is capped with an acrylic layer for IME (serving as the thermoformable substrate), claiming to combine ‘the strengths of acrylic, such as high scratch and chemical resistance, with the processing advantages of polycarbonate,’” said Dyson, who is a doctor of philosophy in physics specializing in organic electronics. “Polycarbonate is the most common plastic for the injection molding step, but in principle any plastic can be used where the heat and pressure required for injection molding doesn’t damage the electronics. Transparent plastics for injection molding are often used to serve as light guides for these decorative parts.”

Despite similarities to IMD, there are many technical challenges in integrating electronics that have to withstand thermoforming and injection molding. A very high manufacturing yield is important because the circuitry is embedded, and a single failure can render the entire part redundant, Dyson said.

On the material side, conductive inks, dielectric inks, and electrically conductive adhesives need to survive the forming and molding steps that involve elevated temperatures, pressure, and elongation. In addition, all the materials in the stack need to be compatible, which is why many suppliers have developed portfolios of functional inks designed specifically for IME, Dyson said.

IME is best used in cases that require a decorative touch-sensitive surface, such as control panels in automotive interiors and on kitchen appliances. It enables a 3D, smooth, wipeable, decorative surface with integrated capacitive touch, lighting, and even haptic feedback and antennas, Dyson said. While the first commercial examples are beginning to emerge in the consumer goods space, adoption in vehicle interiors has been delayed due to COVID-19. The slow adoption in automotive also is attributed both to the challenges of meeting automotive qualification requirements and the availability of less sophisticated alternatives, such as applying functional films to thermoformed parts.

Despite this setback, the market is beginning to shift, with equipment suppliers developing specialist capabilities and development projects reaching their conclusion.

“The dominant sector is expected to be automotive interiors, with use cases such as overhead consoles, window switches, center consoles, and steering wheel controls,” Dyson said. “Touch sensitivity is achieved via changes in the capacitance. Other application sectors include white goods (such as the control panel on washing machines), and other countertop appliances."

“Medical devices are another possibility. The advantages of IME over conventional mechanical switches are reduced weight, fewer parts, reduced volume, a smooth/wipeable exterior, durability of the final component (no moving parts), and ease of integrating lighting,” he said. “The reduced weight is especially desirable in the automotive (and potentially aerospace) sectors. IME also facilitates ‘versioning,’ since the decorative exterior and electronics can be easily changed while keeping the same molds.”

Currently, IME with electronic components mounted on a flat surface prior to thermoforming is an emerging technology that is not widely used. But there are exceptions.

“There are some commercial examples in the public domain, such as the Shepard smart lock, Dyson said. However, other related manufacturing methods, such as applying a film with conductive traces to the thermoformed plastic, are more established, he added. Despite being in the early stages, major plastics manufacturers such as DuPont and Covestro are investing in developing a materials portfolio to IME, according to Dyson. This is because they hope to offer more specialized/differentiated products for a new technology, as well as being the first to supply plastics that define the processing methods used.

The long-term target for IME is to become an established platform technology, similar to the rigid PCBs of today, Dyson said. After that is achieved, getting a component/circuit produced will be a simple matter of sending an electronic design file, rather than the expensive process of consulting with IME specialists, as is currently required. As this technology gains acceptance, it will require clear design rules, materials that conform to established standards, and the development of electronic design tools, he added.

A comprehensive IDTechEx updated report, "In-Mold Electronics 2022-2032: Technology, Market Forecasts, Players," covers the commercial and emerging solutions from the key players as IME progresses from R&D to gaining widespread adoption in multiple application sectors. It also identifies the key bottlenecks and innovation opportunities, as well as emerging technologies associated with IME, such as thermoformable particle-free inks.