How to Build a Smart Doghouse 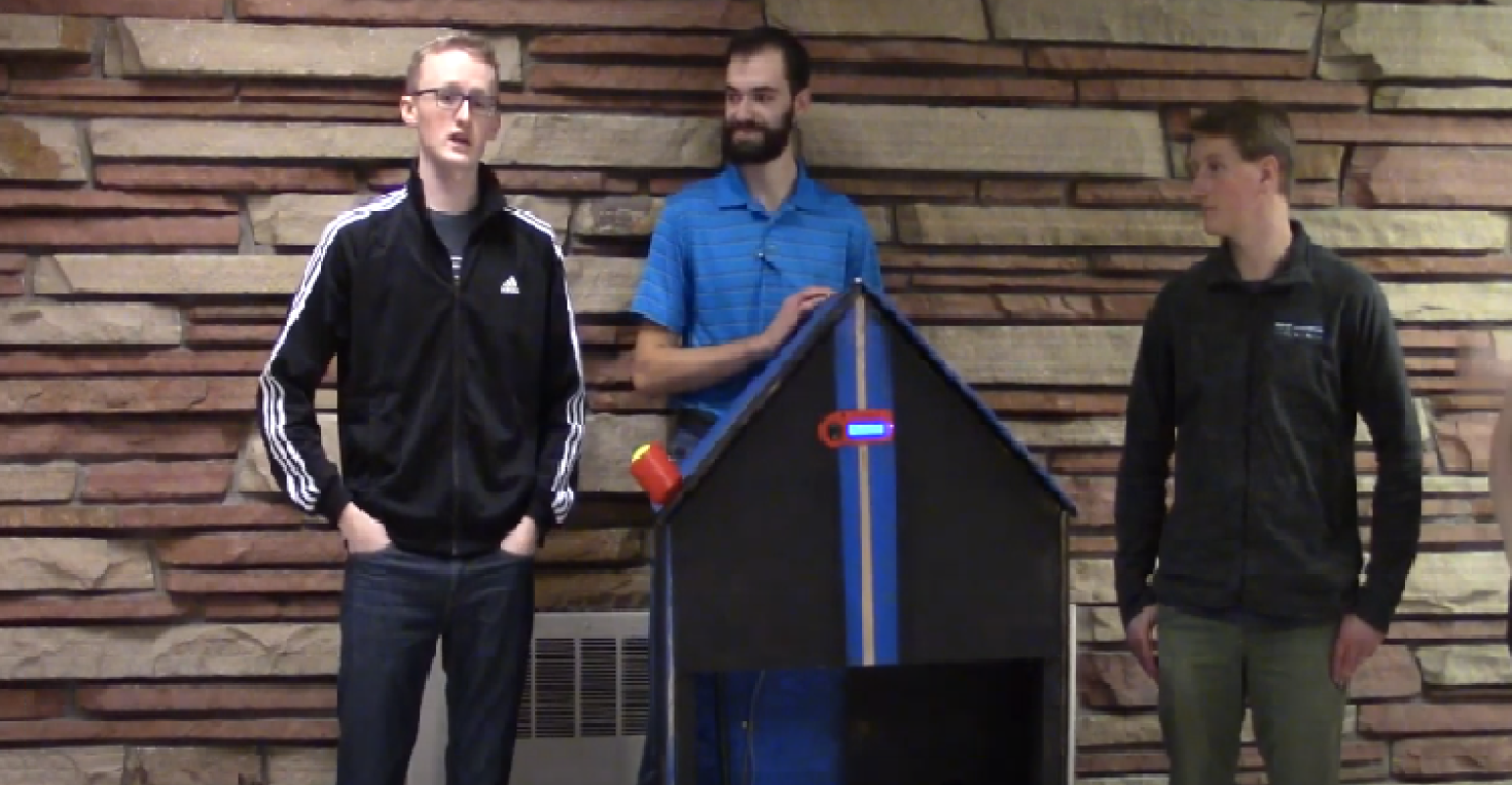 Colorado State engineering students demonstrate how to build a doghouse to shelter the dog and so much more.

Four Colorado State engineering students have created a smart doghouse. Michael Bowers, Lex Pollicita, Steven Baird, Justin Falk, and Trenton Rice sent along the description of the doghouse, a parts list, a video explaining how it works, and the design specifications.

The Smart Doghouse draws a whole new perspective on conventional doghouses. It has all the features of a normal doghouse, but it also incorporates several smart features to help people take better care of their pets. Just like any doghouse, the Smart Doghouse is designed to give the dog shelter no matter what the weather. But the new design incorporates several additional features such as an automatic dog feeder, a tennis ball launcher, and a level detecting water bowl.

The First Feature Was the Feeder

This feature allows the user to fill up a hopper with dog food that will automatically get dispensed to the dog throughout the day. You can program the number of servings your dog will get, where each serving is a quarter cup of food. You also get the ability to decide how long the dog must wait between feed times. The hopper holds approximately three gallons of dog food. So, depending on how much you want to feed the dog, and how often, the food supply could last up to five or six days.

Located next to the feeding hopper is an easily refillable water jug that holds several days’ worth of water, depending on the temperature and how much water your dog drinks. With a spigot coming from the jug down into a lower bowl, the system maintains a constant water level until the jug runs dry. Once this happens, the low water level will be detected by a sensor in the water bowl that will emit a buzzer sound on a loop to alert you of the low water level.

Another highlight of the Smart Doghouse is the tennis ball launcher located within the roof. It can be operated entirely by a dog with minimal training. By simply pressing the foot pedal located in between the food and water bowls, a compressor will fill a pressurized tank to a user-specified PSI and after a short delay and buzzer sound, the tennis ball will be launched from the protruding barrel. The 3D printed barrel gives excellent strength with minimal friction, making it possible for the dog to replace the tennis ball without the need for human support.

The Smart Doghouse may seem complicated, but when it’s broken down, it’s fairly simple and easy to understand. The automatic dog feeder is composed of the hopper, the channeling mechanism, the dispensing shaft, and the funneling apparatus. The shape of the hopper (Figure 1) is designed to funnel the food into the channeling mechanism, which is connected to the dispensing shaft. Loading the food into the hopper is the only necessary input you need besides programming the preferences. 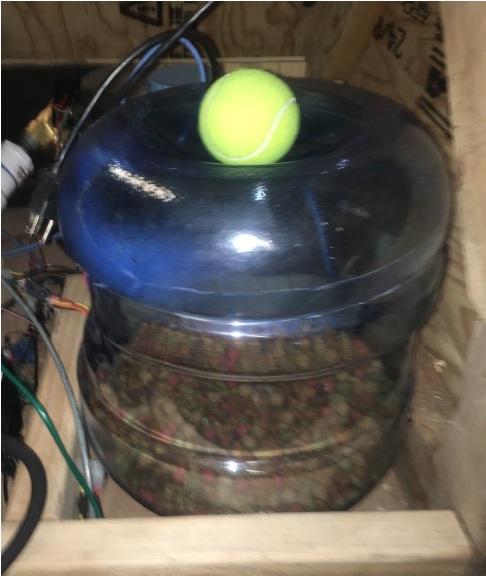 When it’s feed time, the buzzer will sound to inform the dog that it is time to eat. Then the dog must approach the bowl to get it to dispense food. There is an RFID proximity scanner that is attached to the inside of the dog's food bowl, and the chip that activates the scanner will be attached to the dog’s collar.

We have designed the system this way so that if the dog is not present then the food will not get dispensed until the dog is back, so there won't be food getting dispensed when the dog is not home. Another reason for this is to make sure that the dog is the only animal getting fed. We don’t want raccoons or squirrels to get the food that is being dispensed.

Once the dog approaches the bowl the RFID scanner will give the signal to dispense the food, this will send a signal to power the motor. The motor will turn a certain number of times based on how much food the user has set for the dog. Since each rotation dispenses 1/4th of a cup, if the user wants the dog to receive two cups, then the motor will rotate the dispensing shaft eight times.

There is a limit switch in constant contact with the feeder shaft to help determine how many revolutions it has made. The dispensing shaft turns and drops the food into the funneling apparatus which then funnels the food down into the dog bowl. This apparatus is shown below in Figures 3 and 4.

Figures 3 and 4. Left and Right Sides of Feeder Shaft

Figures 5 and 6. Water Bowl with Sensors and Spigot (Left) and Water Jug (Right)

If you need to take out the water container or to remove the water bowl, the spigot can be closed so that no water will flow. If the dog does run out of water this will be detected by a sensor in the water bowl (Figure 6), which will then send a signal to sound the buzzer on a loop with a specific sound to warn the owner of the low water level. There is also a thermocouple, shown in Figure 6 as the silver disk in the water bowl. That has been incorporated in the water bowl to help regulate temperature. If the water gets too cold, then it will send a signal to activate the heating pad on the bottom of the water bowl. Once the water gets back to an appropriate temperature, it will signal the heating element to turn off. The heating element and the back end of the thermocouple holder disk are shown in Figure 7. 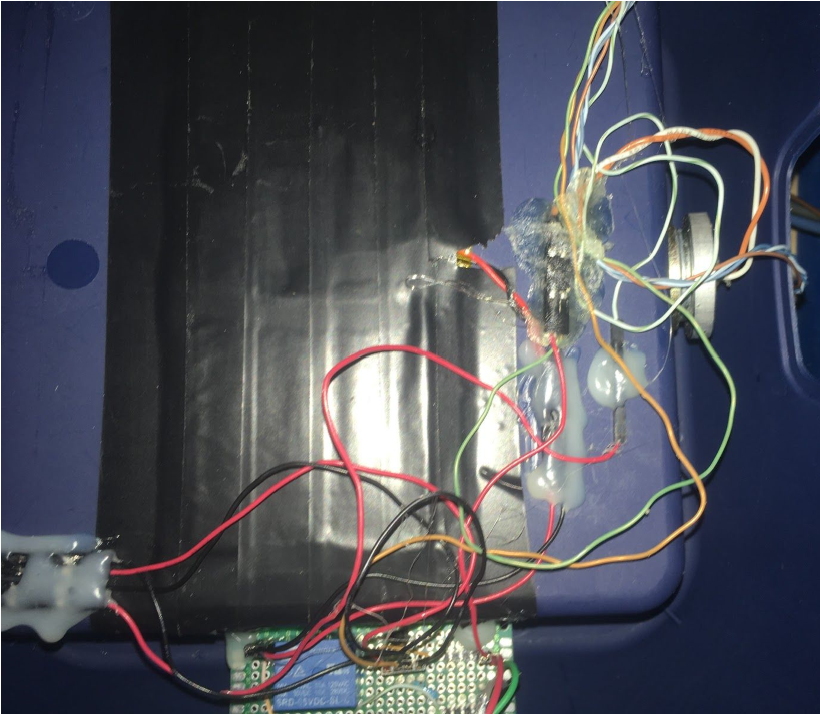 Finally, the ball launcher is designed so that someone who is unable to throw a ball can use this to play fetch. The launcher is made of a compressor that is attached to an air reservoir made from PVC pipe to hold the air. At the end of the reservoir is a solenoid and a 3D printed barrel (Figure 8). To operate the ball launcher, one simply needs to put the ball into the barrel and then press the pedal.

Once the pedal is pressed, the compressor is activated and it fills the reservoir to a specified PSI, then a buzzer will sound three times along with a message on the LCD screen to warn that the ball is going to be launched (Figure 10). This starts when the pedal is pressed (Figure 11). It’s a simple switch that is designed to have a hard stop so that it does not break. When the ball is launched, the program is designed to keep the solenoid open until the pressure gets back to 0 Psi for safety. 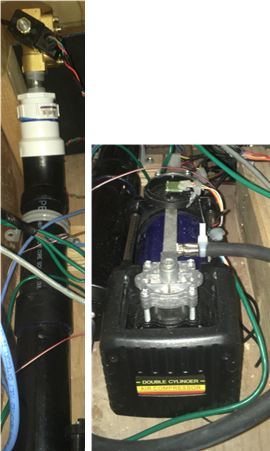 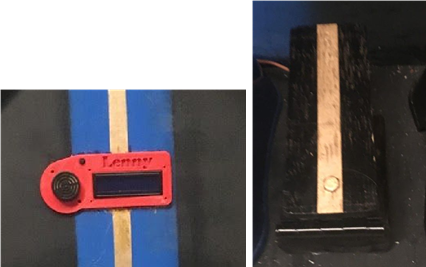