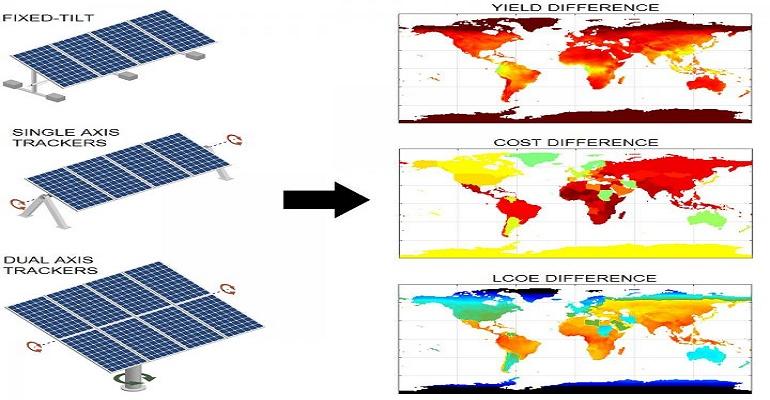 Solar energy has made big strides in the last decade as it becomes more widely used throughout the world. Now researchers have found a way to make solar panels produce even more energy while reducing costs with the design of new double-sided panels and technology to optimize their sun exposure.

A team from the Solar Energy Research Institute of Singapore—which was sponsored by the National University of Singapore—developed the new solution, which combines what are called bifacial solar panels with single-axis tracking technology that tilts the panels so they can follow the sun, researchers said. Bifacial, or two-sided solar panels, basically what their name implies—they collect sunlight from two sides instead of one.

While both types of technology already exist, the research marks a new direction in combining the two to optimize the generation of solar power while keeping costs low, which will help make solar energy compete on par with traditional energy solutions.

"The results are stable, even when accounting for changes in the weather conditions and in the costs from the solar panels and the other components of the photovoltaic system, over a fairly wide range," said Carlos Rodríguez-Gallegos, a research fellow at the Solar Energy Research Institute of Singapore, in a press statement. "This means that investing in bifacial and tracking systems should be a safe bet for the foreseeable future."

In their tests of the combination of technologies, researchers found that when used together, they can produce almost 35 percent more energy, on average, than immobile single-panel photovoltaic systems, while reducing the cost of electricity by an average of 16 percent.

Researchers used computer modeling leveraging various data sets to optimize their solution. Some of the data came from NASA's Clouds and the Earth's Radiant Energy System (CERES) to measure the total radiation that reaches the ground each day.

The researchers further customized this data to take into account the influence of the sun's position on the amount of radiation a solar panel can receive based on its orientation, and then calculated the average net cost of generating electricity through a photovoltaic system throughout its lifetime.

In modeling their solution, the team focused on large photovoltaic farms composed of thousands of modules, validating their results from experimental farms set up by three scientific institutes. They also integrated various weather parameters to perform a worldwide analysis of the performance of the panels.

The model the team came up with suggests that double-sided solar panels combined with single-axis tracking technology are the most cost-effective solar-energy generation solution almost anywhere on the planet. However, the research shows that using dual-axis trackers—which follow the sun's path even more accurately than single-axis trackers but cost more—produce better results in latitudes closer to the earth’s poles, Rodríguez-Gallegos said.

Researchers published a paper on their work in the journal Joule.

Despite the results of the study, he said he is realistic about the potential for a solution like the one the team modeled to be implemented widely soon, as the photovoltaics market tends to move ahead rather slowly.

"More and more evidence points toward bifacial and tracking technology to be reliable, and we see more and more of it adopted in the field,” Rodríguez-Gallegos said in a press statement. “Still, transitions take time, and time will have to show whether the advantages we see are attractive enough for installers to make the switch."

Researchers plan to continue their work to analyze how their solution might work with different cells other than silicon-based units, including tandem technologies currently limited to heavy-duty concentrator photovoltaics and space applications.