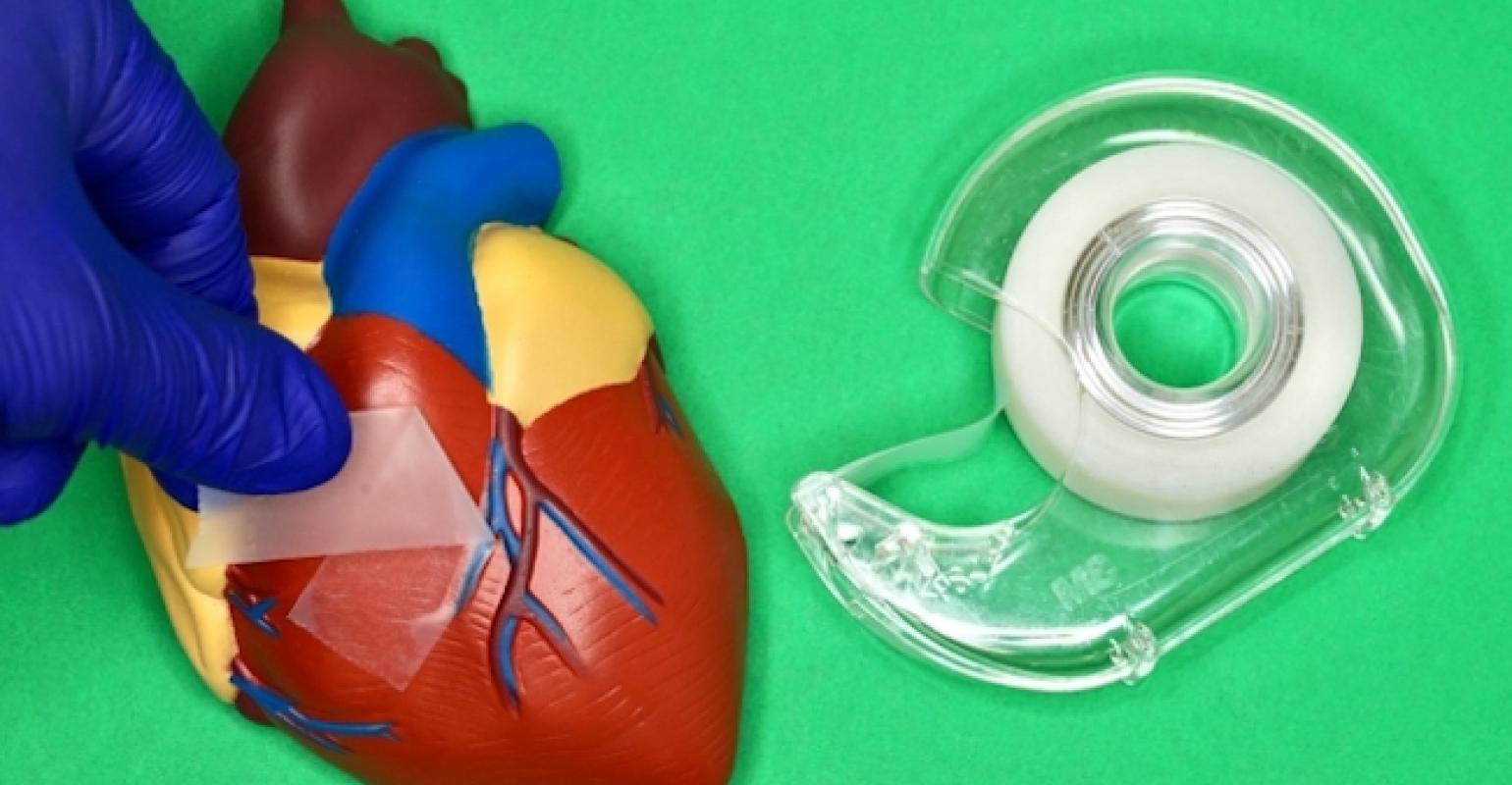 A double-sided adhesive developed by MIT engineers firmly sticks to biological tissues but can be adjusted during surgery or detached from a tissue or implant without causing any damage.

Described as a “painless Band-Aid for internal organs,” a double-sided adhesive developed by MIT engineers firmly sticks to biological tissues but can be adjusted or detached, when needed, without causing any damage.

MIT researchers first developed an adhesive that quickly and firmly sticks to wet surfaces such as biological tissues last year. Jennifer Chu reported this week on the MIT News site that they had further developed the adhesive so that it can be safely detached from the underlying tissue. By applying a liquid solution, the new version can be peeled away like a slippery gel in case it needs to be adjusted during surgery, for example, or removed once the tissue has healed. “You put the adhesive on, and if for any reason you want to take it off, you can do so on demand, without [causing] pain,” said Xuanhe Zhao, professor of mechanical engineering and of civil and environmental engineering at MIT.

Zhao is the lead author of a paper describing the research in the Proceedings of the National Academy of Sciences. Co-authors are first authors Xiaoyu Chen and Hyunwoo Yuk along with Jingjing Wu at MIT, and Christoph Nabzdyk at Mayo Clinic Rochester.

The original adhesive designed by the MIT team was made from biocompatible polymers, including polyacrylic acid (PAA). A highly absorbent material commonly used in diapers and pharmaceuticals, PAA soaks up water, then quickly forms weak hydrogen bonds with the tissue’s surface. To reinforce these bonds, the researchers embedded the material with NHS esters, chemical groups that form stronger, longer-lasting bonds with proteins on a tissue’s surface.

To make the adhesive detachable, a new disulfide linker molecule was placed between covalent bonds with a tissue’s surface proteins. The team chose to synthesize this particular molecule because its bonds, while strong, can be easily severed if exposed to a particular reducing agent. For that, the researchers settled on glutathione, an antioxidant naturally found in most cells that is able to break long-lasting covalent bonds such as disulfide, and sodium bicarbonate (baking soda), which deactivates the adhesive’s shorter-lasting hydrogen bonds.

The team mixed concentrations of glutathione and sodium bicarbonate together in a saline solution, and sprayed it on samples of adhesive that they placed over various animal organ and tissue specimens. In all their tests, regardless of how long the adhesive had been applied to the tissue, the researchers found that, once they sprayed the triggering solution onto the tape, they were able to peel the tape away from the tissue within about five minutes, without causing tissue damage.

“That’s about the time it takes for the solution to diffuse through the tape to the surface where the tape meets the tissue,” Chen says. “At that point, the solution converts this extremely sticky adhesive to just a layer of slippery gel that you can easily peel off.”

The researchers also fabricated a version of the adhesive etched with tiny channels. This design should be particularly useful if the tape is used to attach implants and other medical devices, writes Chu. Instead of spraying the solution on the tape’s surface, a surgeon can apply the solution around the tape’s edges, where it could diffuse through the adhesive’s channels.

“Our hope is that some day, operating rooms can have dispensers of these adhesives, alongside bottles of triggering solution,” said co-author Yuk. “Surgeons can use this like Scotch tape, applying, detaching, and reapplying it on demand.”

The team is working with surgeons to see whether the new adhesive can help repair conditions such as hemorrhages and leaky intestines.

“Our goal is to use bioadhesive technologies to replace sutures, which is a thousands-of-years-old wound closure technology without too much innovation,” Zhao says. “Now we think we have a way to make the next innovation for wound closure.”