Chuck Yeager – Conqueror of the Speed Barrier – Passes at 97 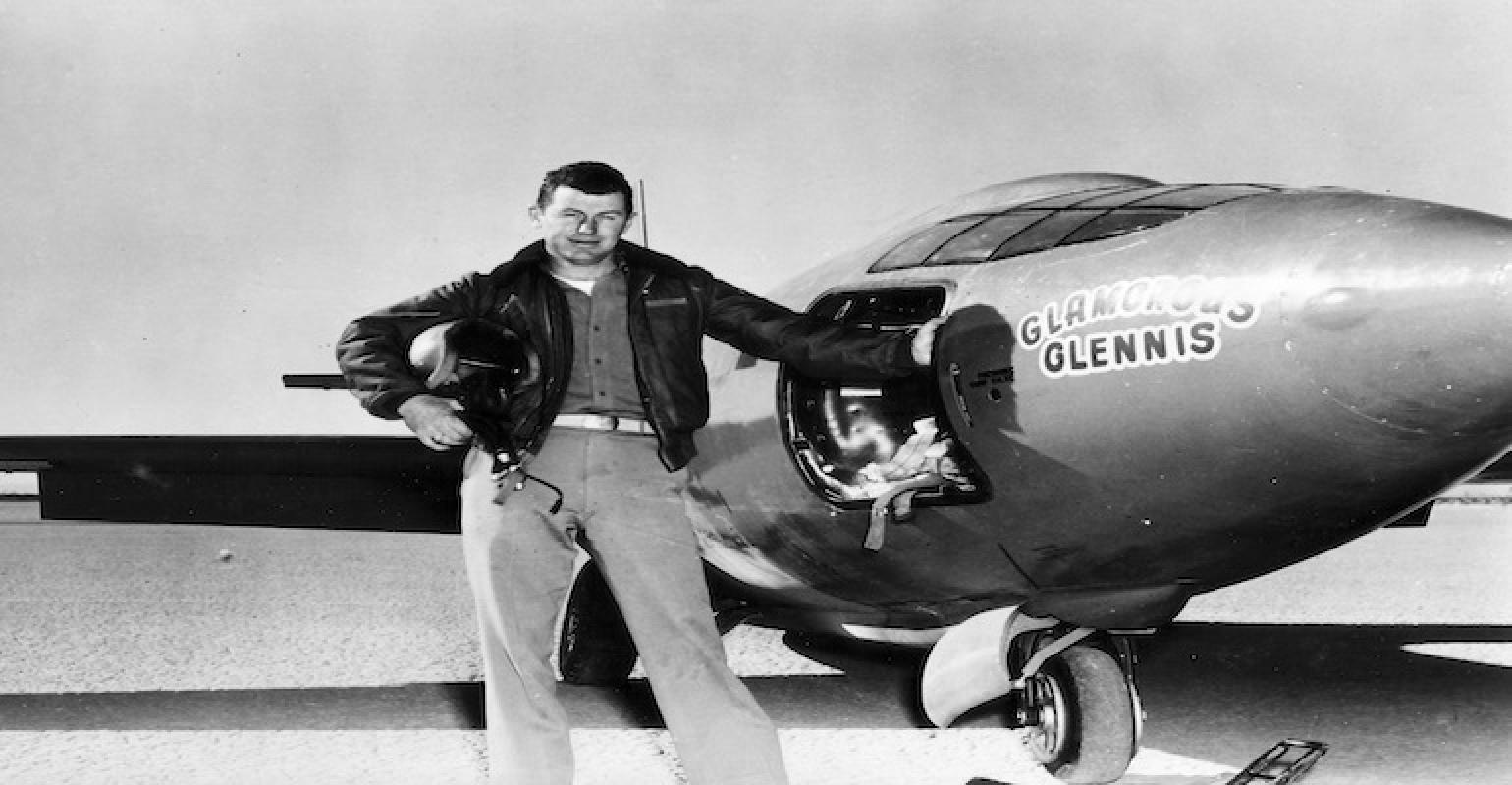 Distinguished veteran epitomized the rugged pilot who constantly tested the boundaries of flight – and survived.

It’s difficult to remember but there was a time when it was thought no human could travel faster than the speed of sound. On Oct. 14, 1947, Air Force Captain Yeager shattered that belief when he became the first pilot to break the sound barrier in the rocket-powered Bell X-1 prototype test aircraft.

Breaking the sound barrier was no minor achievement. As an aircraft approaches that speed, there is a sudden increase in aerodynamic drag that makes controlling the aircraft very difficult. Visually, the transition point when flying faster than sound can be seen – with a really fast camera – as a white cloud that is formed by the decreased air pressure and temperature around the tail of the aircraft. At the same time, observers on the ground would hear a sonic boom as the aircraft achieves Mach 1 – the speed of sound. (Image Source: Ensign John Gay, U.S. Navy, Public Domain)

Yeager went on to other achievements until his death on Dec 7, 2020. His passing was announced on Twitter Monday night by his wife, Victoria Yeager. “It is with profound sorrow, I must tell you that my life love General Chuck Yeager passed just before 9 p.m. ET,” she wrote. “An incredible life well lived, America’s greatest pilot, and a legacy of strength, adventure, and patriotism will be remembered forever.”

Fr @VictoriaYeage11 It is w/ profound sorrow, I must tell you that my life love General Chuck Yeager passed just before 9pm ET. An incredible life well lived, America’s greatest Pilot, & a legacy of strength, adventure, & patriotism will be remembered forever.

Yeager started his avionic career as a pilot in WWII, flying 64 combat missions in Europe. In 1944, he was shot down during a mission over Bordeaux, France, but escaped to neutral territory with the help of the French resistance movement.

After the war, Yeager worked at the Flight Test Division in Wright Field, Ohio, where his main task was to fly test fighter aircraft, according to Yeager’s website. Later, he was assigned to Edwards Air Force base (called Muroc Army Air Field at the time) where he would eventually break the sound barrier flying the Bell X-1, which he dubbed the Glamorous Glennis after his first wife.

The official announcement of Yeager’s achievement was kept classified until 1948. Once it was known to the general public, Yeager became a celebrity. He was awarded the National Aeronautic Association’s Collier Trophy for his historic flight.

He was re-introduced to a younger era of Americans in the 1983 film adaption of Tom Wolf’s book, “The Right Stuff.” This adaptation chronicled the first 15 years of America's space program and the dangers faced by Yeager and early Mercury astronauts. Yeager's toughness and bravery as a test pilot were considered as a role model of the “right stuff” for future astronauts to follow. In the film, actor Sam Shepard played Yeager while Yeager himself had a cameo appearance as Fred, the bartender at Pancho’s Place.

After breaking the sound barrier, Yeager continued his career in flight testing, including testing Lockheed’s XF-104, an aircraft that was capable of flying at twice the speed of sound. It was later used as a chase plane for the iconic X-15 aircraft, which continued to set new speed records.

Yeager had his share of brushes with death during his career as he was often the first to fly untested prototype aircraft. For example, during a later test flight of the Bell X-1A, he lost control when he turned the engine off during a planned maneuver. His skill as a pilot helped him to regain control but only after the aircraft – really, more like a rocket-shaped vehicle – fell tens of thousands of feet.

Then, in the early 1960s, a crash occurred while Yeager was piloting the Lockheed NF-014. He managed to parachute to safety but suffered burns on his face and neck, apparently from the results of the ignition of pure oxygen in his mask. The crash was depicted in both the book and movie versions of "The Right Stuff."

Yeager later commanded fighter squadrons in Germany and Southeast Asia during the Vietnam War and was promoted to brigadier general in 1969. His last active-duty flight was during February 1975, in an F-4C Phantom II. He retired on March 1, 1975, but continued to be active as a consultant and was much sought after for public appearances.

On 14 October 1997, Yeager returned to Edward Airforce base to commemorate the 50th anniversary of his historic X-1 flight – this time on-board an F-15D Eagle with the name Glamorous Glennis. He retired from flying military aircraft on Oct. 26, 2002, after creating a sonic boom to open the Edwards Open House and Air Show.

Glennis Yeager died in 1990 of ovarian cancer, and Yeager married actress Victoria Scott D'Angelo in 2003. He is survived by Victoria and his four children with first wife Glennis.

To learn more about Chuck Yeager’s life and career, visit his website.