Bluetooth Trends in Smartphones and the Implications for Medical Device Software

Image by Pexels from Pixabay 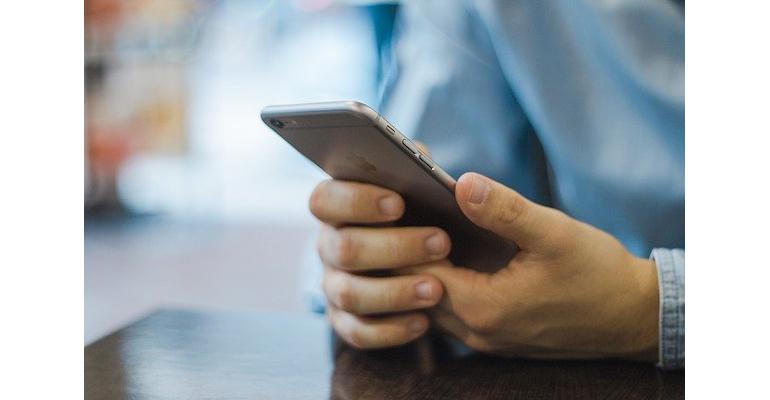 New analysis of the U.S. smartphone market tells medical device manufacturers to be ready in 2023 to take advantage of Bluetooth 5.x for their connected devices.

Bluetooth 5 marks a major step forward for software developers working on connected devices that need a range of features including longer battery life through lower energy consumption, greater bandwidth for communication between devices, and a great distance allowed between communicating devices. Today, the partial adoption of Bluetooth 5 as a minimum standard for smartphones poses a problem for software developers. Partial adoption limits software developers’ ability to fully leverage the capabilities of the newer Bluetooth 5 standard. Based on actual smartphone usage data for the USA and Canada, only 73% of iPhones and 58% of Android smartphones currently are using Bluetooth 5.x standard, with the remainder largely using Bluetooth 4.x variants. The good news for connected medical device makers is that by 2023, it is projected that 95% of the US/Canada smartphone market will have Bluetooth 5.

Mobile devices have become a ubiquitous part of modern life. In the USA in 2020, there were over 294 million smartphones. The adult population (over age 18) of the USA is only 209 million. That means almost every adult is carrying a smartphone.

The ubiquitous nature of the smartphone (which includes a powerful local computer, touchscreen interface, rich network connectivity upstream to the Internet and downstream to Internet of Things devices, and a powerful array of embedded physical sensors, out-of-the-box) makes it a perfect tool for medical monitoring, diagnostics, and therapeutics (i.e., treatment). In this article, we will analyze the trends for smartphones and specifically Bluetooth versions that have a major impact on the software that operates smartphones in conjunction with connected medical devices such as insulin pumps, glucose monitors, active implanted surgical devices, and devices that rapidly diagnose infectious disease. The results are pulled from ScientiaMobile’s Mobile Overview Report (MOVR) from 2021 Q1, and our predictions are based on a longitudinal analysis of MOVR data. The analysis of the importance of Bluetooth 5.x to certain kinds of connected medical devices borrows from Orthogonal’s Smartphone Market Analysis for Software as a Medical Device (SaMD) Developers from 2021 Q1.

While most people carry a smartphone, the variety of smartphones is growing. Developing software that will run on those smartphones and effectively use the capabilities of the device is a challenge.

Since 2011, the number of mobile device model profiles (a unique combination of brand, model, and operating system version) tracked by ScientiaMobile’s WURFL device detection software has increased more than 400% to reach more than 80,000 devices in 2021. (See figure below. This analysis does even not take into account the unique browser software and versions used on any given mobile device profile.) 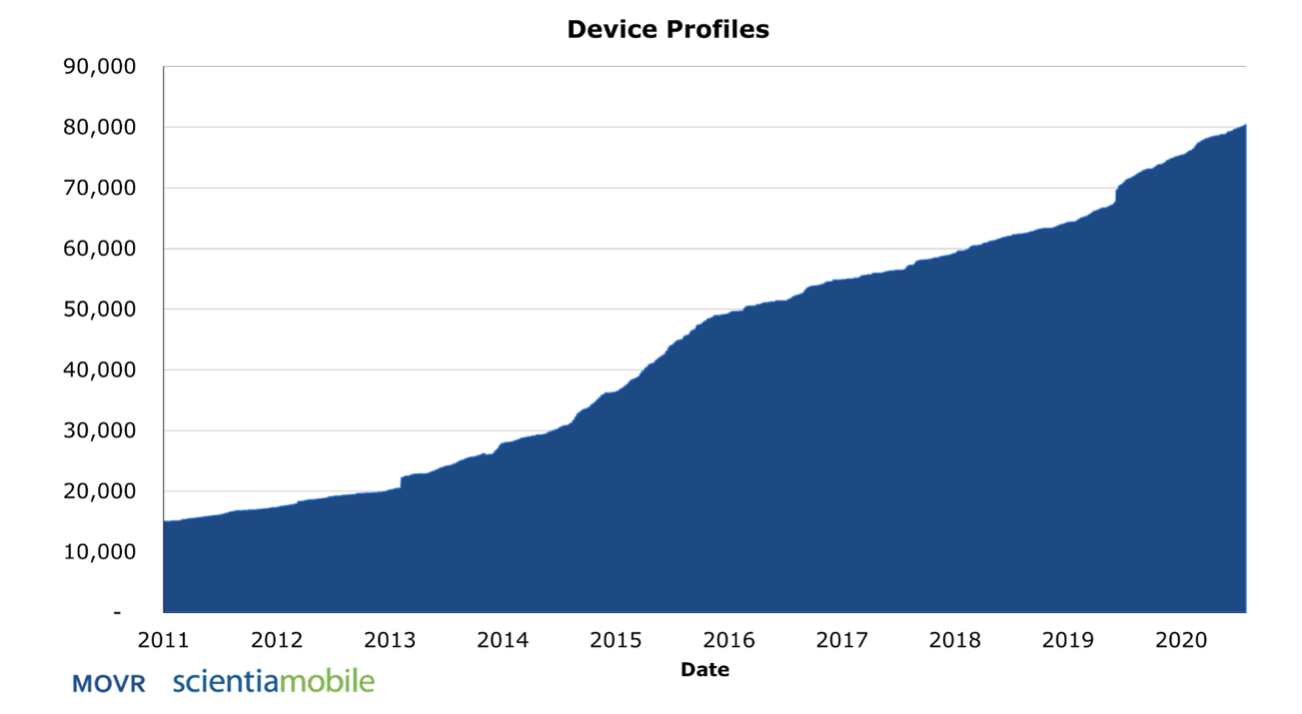 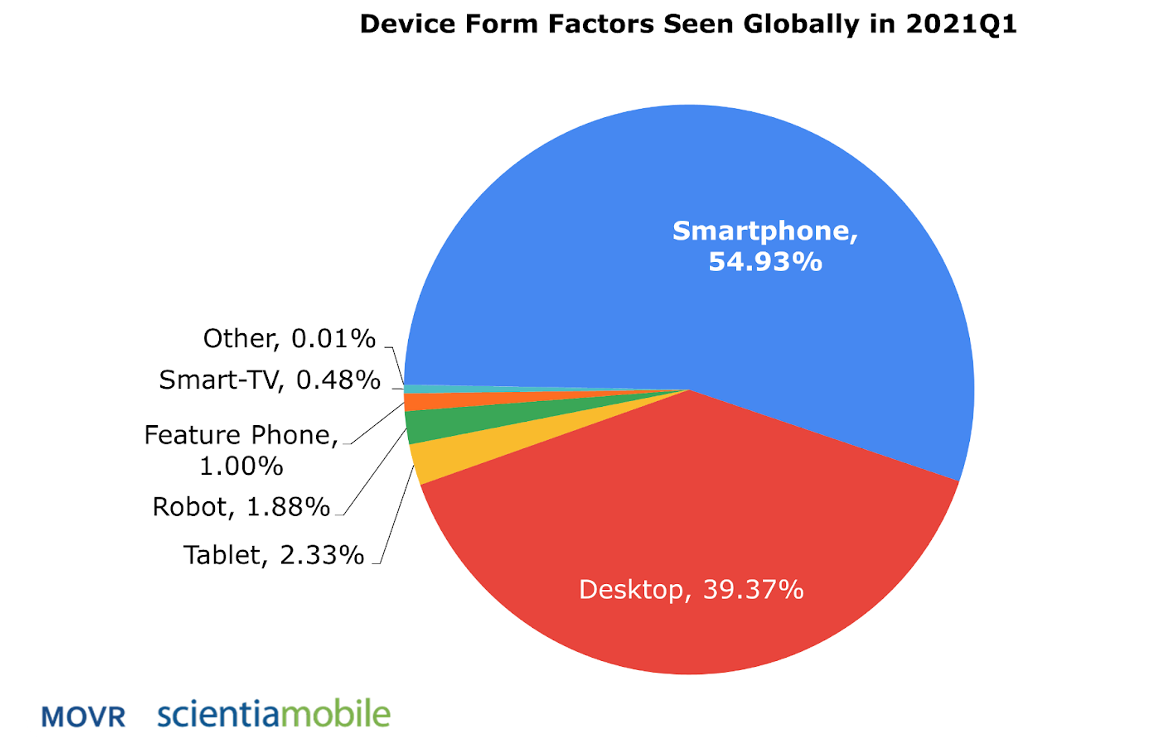 Clearly, this level of fragmentation poses problems. However, many of the smartphone models are rarely seen anymore, leaving quite a long tail in the fragmented ecosystem. Measuring the usage of smartphones and evaluating the commonality of critical features, like Bluetooth versions, provide critical insight for software developers. The MOVR issued by ScientiaMobile on a quarterly basis provides analysis of mobile device usage trends.

In general, there are two flavors of smartphones determined by their operating system (OS): Android or iOS. Globally, Android is the most popular OS, with 70% of all usage. 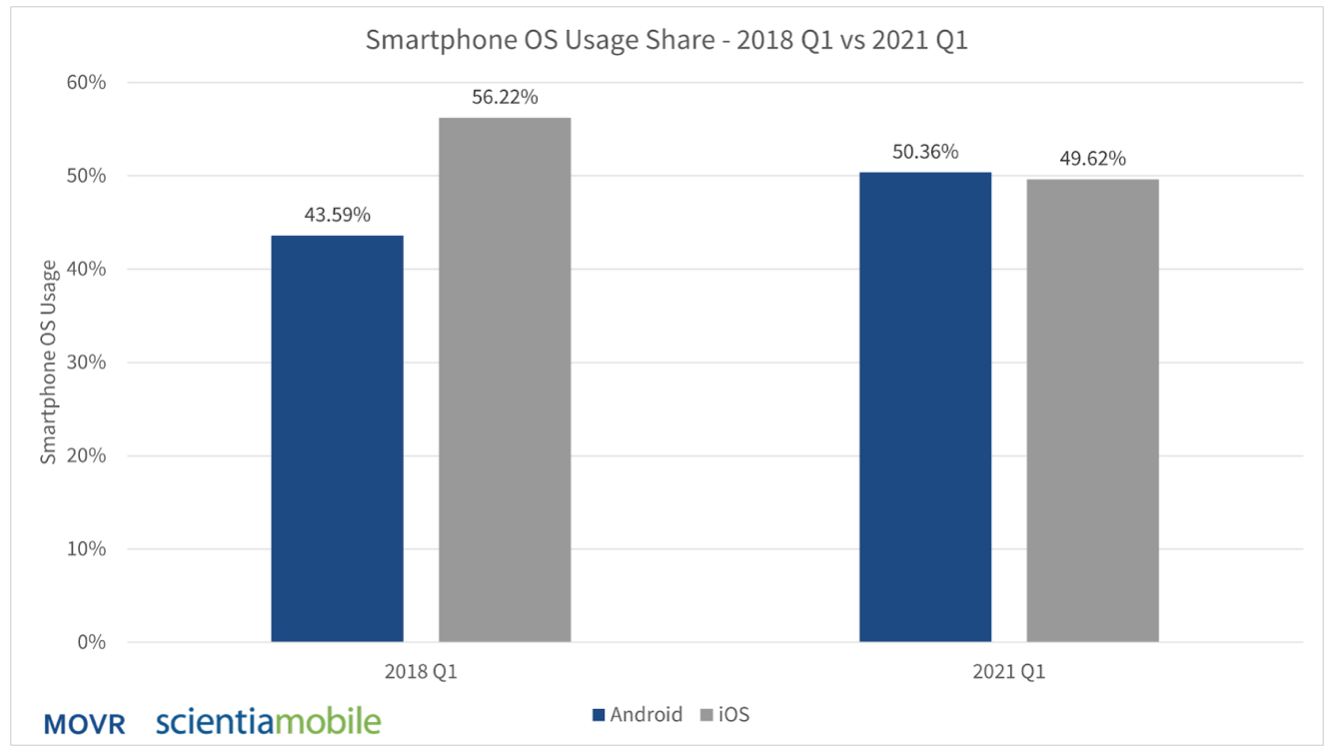 In general, Android smartphones are more affordable than Apple’s iPhones that run iOS. So over time, Apple has succeeded in holding the premium price market segment, but that dominance is slowly eroding. 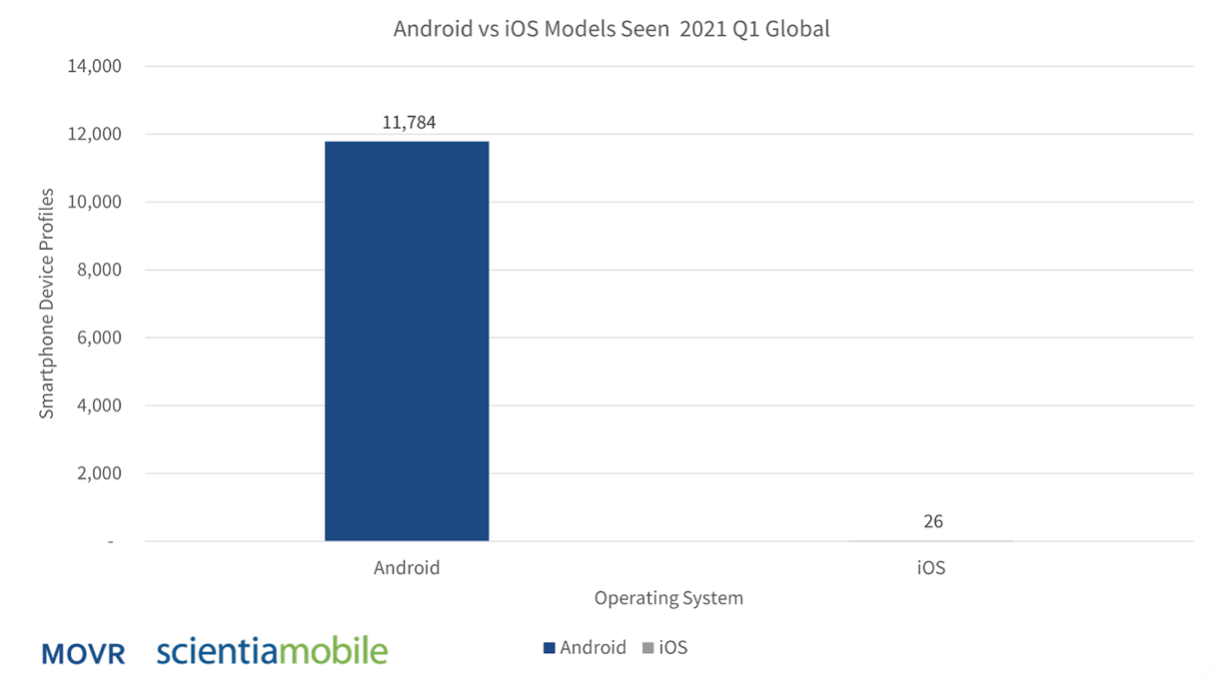 Bluetooth Is a Critical Capability for Medical Software

Bluetooth is a wireless protocol that enables connectivity between devices. Almost all smartphones today include Bluetooth capabilities, and according to the industry group Bluetooth SIG, 100% of new smartphones shipping today now include Bluetooth support.1 However, Bluetooth comes in different versions. The Bluetooth version is critical for specific types of connected medical devices for a number of reasons2: 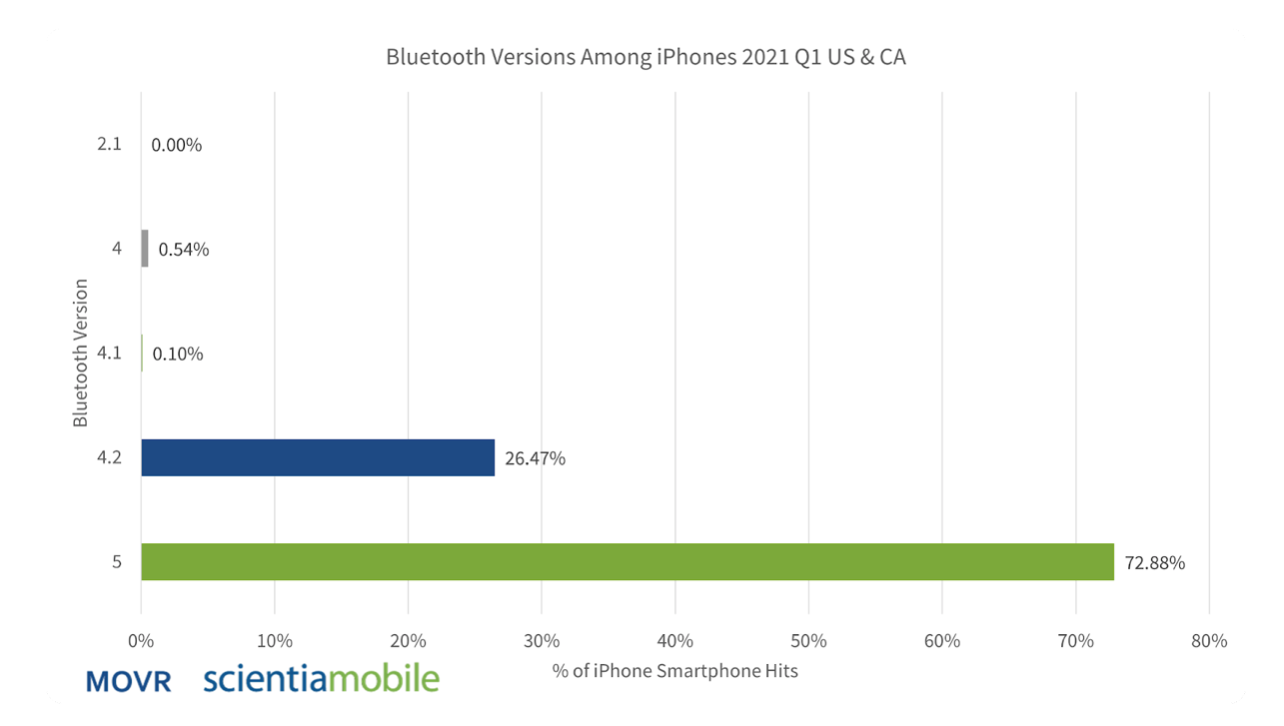 In contrast, Android smartphones are more fragmented and not as advanced in their Bluetooth capabilities. (See below.) 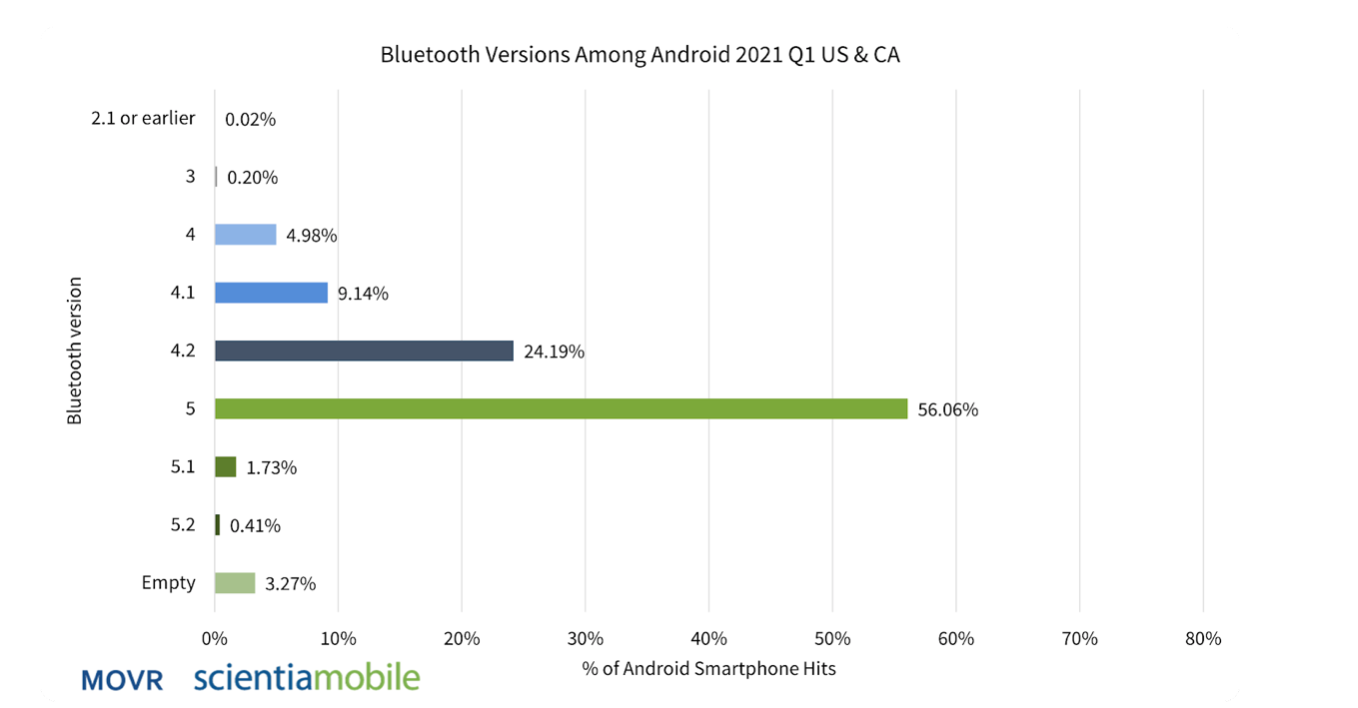 For both Android and iOS, this situation is problematic for connected medical device makers that want to avail themselves of the new features in Bluetooth 5.0, without having to worry about also designing for backwards compatibility with older smartphones still working on 4.x versions. From a software maintenance perspective, today’s Bluetooth version status is also a problem. Typically, developers of all types of solutions would prefer to have software builds that run on 90%+ of the market. In an ideal world, developers would like to develop a single software version running on Bluetooth 5.0 or newer. However, in 2021 Q1, Bluetooth 5 is far from that 90% goal.

This puts connected medical device makers and other IoT makers in a bind with Bluetooth 5.0-optimal use cases. They can either:

So the question becomes, when will this problem just go away as Bluetooth 5.x-enabled phones replace the last of the Bluetooth 4.x phones in use?  How quickly should developers expect newer smartphones with Bluetooth 5 capabilities to replace older smartphones?

Age and Replacement of Smartphones

Over 54% of Android smartphones in the USA and Canada are replaced every 24 months. That generally provides an upgrade of the Bluetooth capabilities in the general population via newer smartphones. There are some spikes when looking at ages of phones that are calculated based on release date. In the mobile phone industry, manufacturers tend to release phones to coincide with major conferences (e.g., Mobile World Congress) or heavy sales seasons (e.g., Christmas). Therefore, there are some spikes in the age histogram for Android smartphones. (See below.) 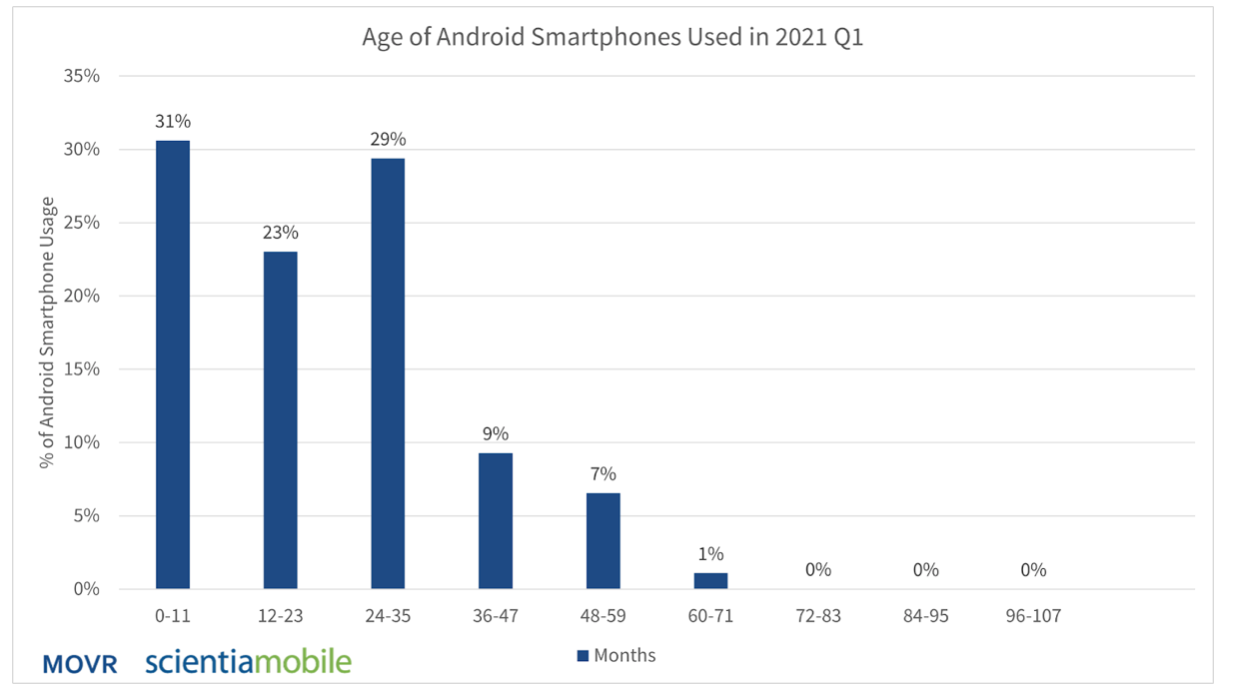 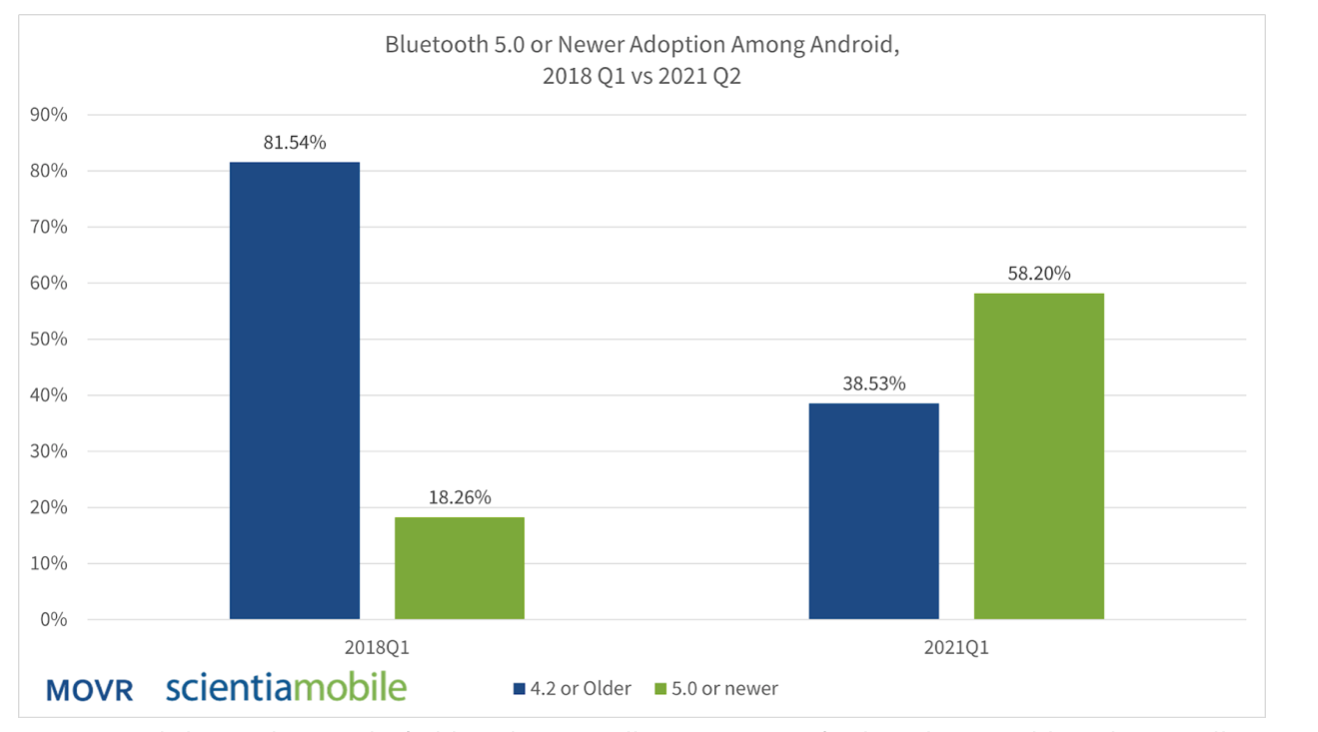 Having said that, a long tail of older phones will persist. But for how long and how large will it be? Looking at the 38% of Android devices that are running 4.2 or older, most of these are already older than the 24 month age of Android devices. (See figure below.) 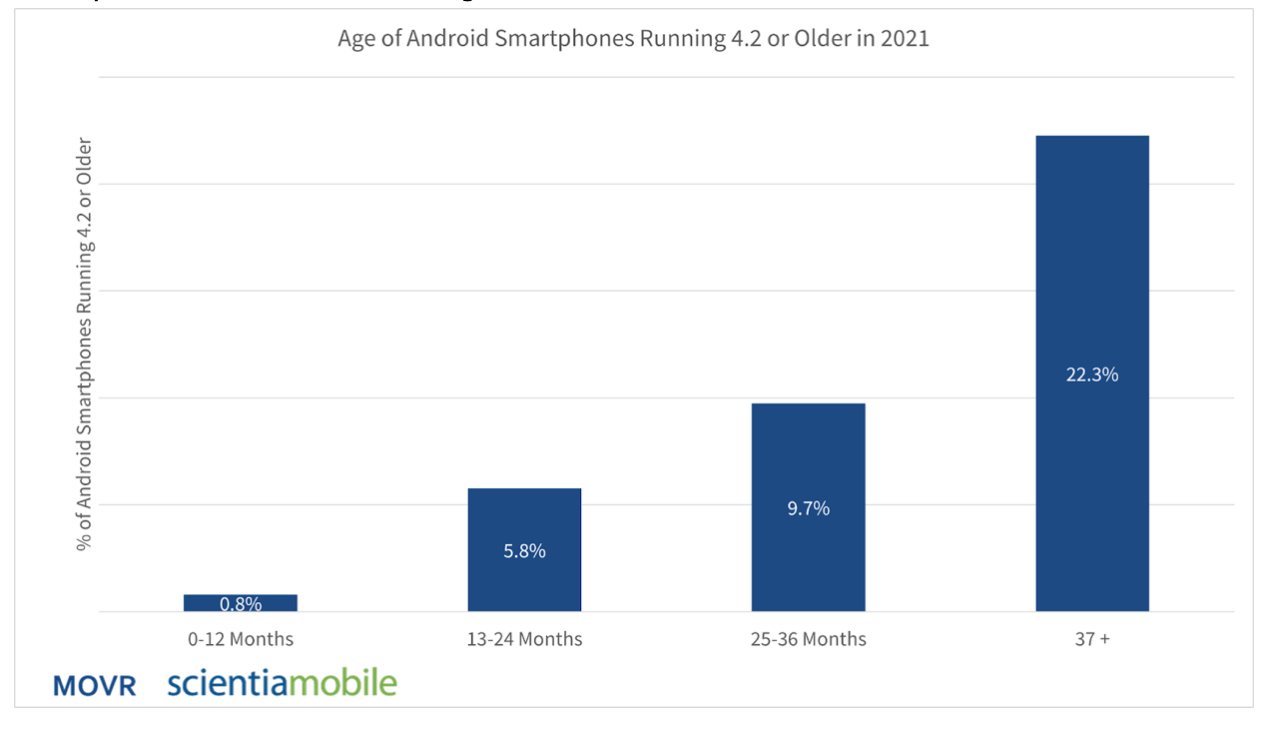 Over time, we can extrapolate based on the replacement rate of older smartphones how quickly Bluetooth Android devices will retire from service. (See figure below.) 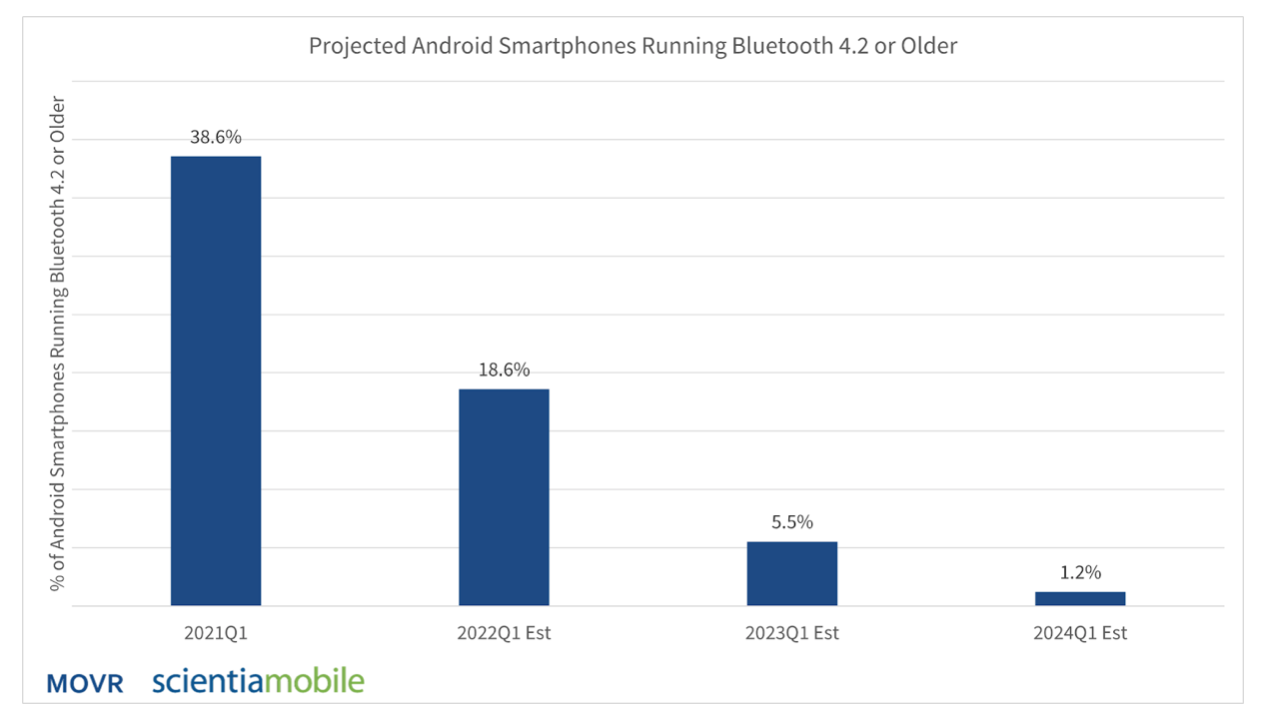 By 2023, Bluetooth 4.2 or older will be about 5% of the Android smartphone market. This should be helpful to many medical device developers, simplifying the need for multiple versions and expanding the addressable market.

Pricing of Bluetooth Versions on Android

In general, Bluetooth version is not a marquis feature that manufacturers advertise. It is more likely that Bluetooth is a cost-saving feature. Low-end smartphone manufacturers will opt for an older version of Bluetooth on low-price budget phones in order to make them more affordable. (See figure below.) 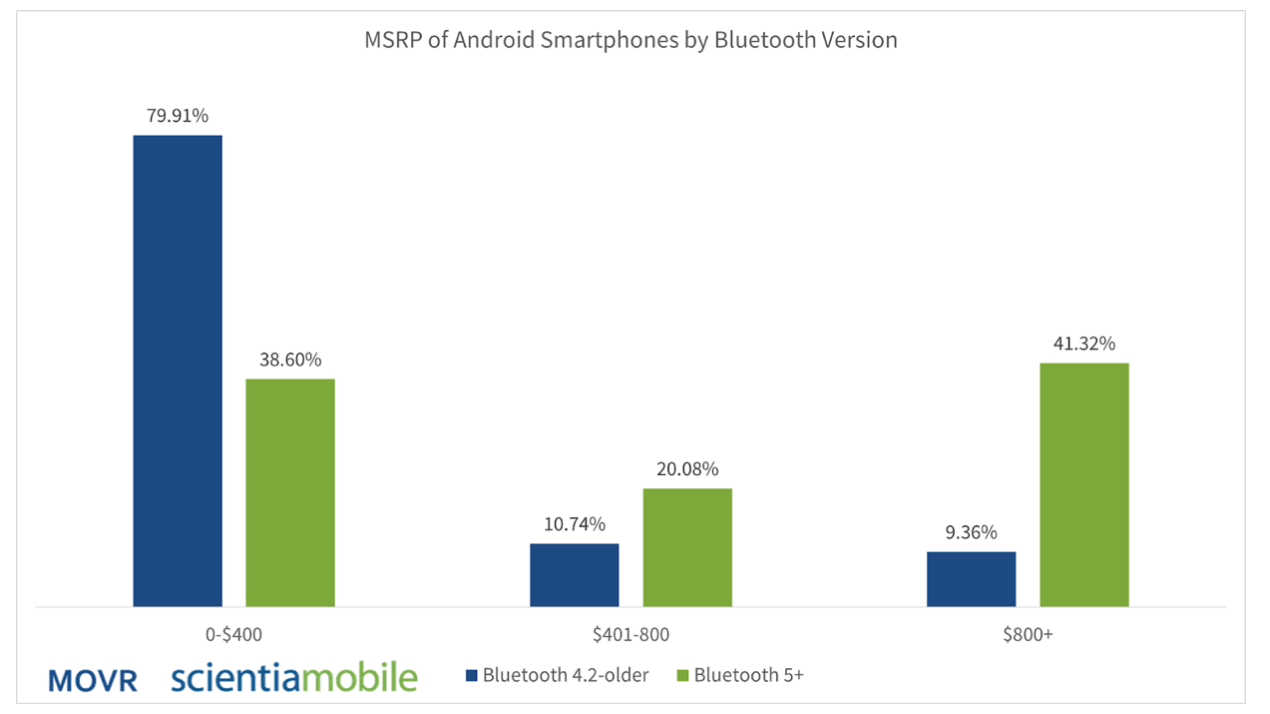 Methodology on How ScientiaMobile Defines the Data

What is a device profile? A device profile in the WURFL device detection solution is a unique combination of device brand, model, and operating system.

What is a usage observation in the data? How is that different that devices sold? Usage observations or a “hit” happens each time a user visits a Web page and a user agent (UA) is generated and tested by WURFL (through a number of mechanisms).  All data reported in MOVR reflects hits, not the count of unique physical devices generating the hit.