Behind the (Simulated) Wheel of General Motors’ Lunar Rover 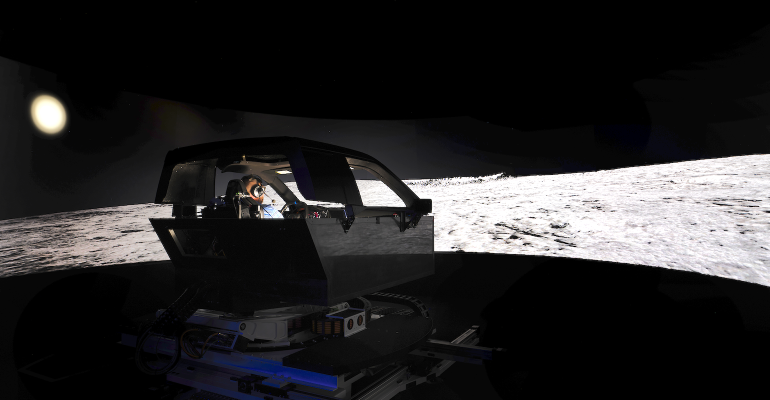 A year after NASA’s announcement that a partnership between General Motors and Lockheed Martin would produce next-generation lunar rovers to be used on planned Artemis crewed missions to the moon, the partners have provided us a preview of their work so far.

While engineers and designers are working to refine concepts for the Lunar Mobility Vehicle (LMV), GM is testing ideas in the same advanced “driver-in-the-loop” simulator that it uses to refine the performance of the upcoming Corvette Z06 and the companies NASCAR and IndyCar race cars. The experience is provided by an Ansible Motion Sigma Series simulator system powered by Nvidia processors.

The simulator’s 270-degree wrap-around screen has an 8-meter diameter, leaving plenty of space in the center for the LMV mock-up where the driver sits. The projected map covers a square kilometer of the lunar south pole. The surface there isn’t mapped in high resolution, so the surface shown in the simulator includes large know features and relies on statistical probably for small rocks and craters, reported Advanced Program Lead, Vehicle Dynamics, Jeff Vogt.

In preparation for my chance to experience the simulator, Vogt explained that the first model they tested proved to have suspension that was much too stiff for the moon’s one-sixth gravity (1.6 meters per second acceleration versus the Earth’s familiar 9.8 m/s. “It rode like a truck!” he recalled. “The suspension didn’t move at all because of the lack of gravity.”

However, while gravity is reduced, mass is unchanged, making inertia a significant factor. “Driving on the moon is like driving on ice,” said Vogt. “If you can imagine the worst ice storm ever, that is what it is like.”

Abrupt stops, starts, and turns break traction in these conditions, so inputs must be done gently to encourage the vehicle’s inertia to change speed or direction using only the limited traction available with one-sixth the expected weight pressing the LMV’s wheels to the dusty lunar surface.

This inertia includes vertical motion, I was warned, so charging up a crater’s rim is likely to lead the simulated LMV to attempt a launch from the moon’s surface. “We learned pretty quickly that if you accelerate too hard to climb an incline, with lower gravity, you launch into space,” said Vogt. “Between that and dust mitigation, we know control systems will be vital to success.”

The LMV has a top speed of 25 kph, but in the simulator, half that speed seems like more than enough as I snake the vehicle around obstacles and turn back from the end of the world on the edge of the 1-km surface map. By comparison, the Apollo-era Lunar Roving Vehicle was only 5 kph.

The primary difficulty in the simulator is recognizing elevation change in the terrain. At times the LMV seems to slow inexplicably, because it is climbing a hill, and at others, it gains speed alarmingly when you’re going down the other side. The two-dimensional simulator doesn’t provide a good feel for this elevation change, but otherwise, the experience seemed very realistic.

GM is building the LMV using off-the-shelf parts of the company’s Ultium electric drivetrain technology, including its battery cells and electric motors. While most Ultium vehicles use pouch-style prismatic battery cells, there are also cylindrical cells in the Ultium portfolio, and these are what the LMV uses because of their greater ability to cope with the moon’s 500-degree temperature swings from the sunlit side to the dark side.

Four Ultium motors will drive the LMV’s four wheels, and Brent Deep, chief engineer of the Lunar Mobility Vehicle program said that the programming and calibration used for the Hummer EV’s three motors were relevant to the LMV’s four-motor layout. He should know because Brent came to the LMV project from the Hummer project.

Just as the Hummer has drive modes, so will the LMV, he said. It doesn’t seem likely that the lunar vehicle will need on-road, snow, or mud-driving capabilities, but astronauts will be able to tailor its mode to the specific circumstances when they are driving.

The company is also using its Cruise autonomous vehicle technology. That’s because the LMV will launch to the moon ahead of the crews that will use it, rather than tagging along with them on the same flight. This means the rover can be bigger, more capable, and at 1,500 kg, heavier, than Apollo-era LRVs.

Once it gets to the moon, the LMV is meant to get right to work, without waiting for human drivers. The three-second round-trip delay between the earth and the moon for radio control signals makes remote driving impractical at all but the very slowest speeds, so the LMV will have full autonomy so that it can go about its work without a driver aboard or one steering it from the earth.

The crewed or autonomous modes presented challenges for GM’s industrial designers as they sought to create the LMV’s configuration. For help, they spoke with surviving Apollo astronauts. “You don’t have many frames of reference,” noted Jeff Nield, director of GM industrial design, so you have to talk to them to build upon what has been done in the past.”

What happened in the past was that astronauts and their equipment got coated in abrasive dust that clings to everything because of its electrostatic charge. So GM’s industrial design team moved the two seats ahead of the LMV’s front wheels, so reduce the chance for the astronauts to be sprayed with dust from those wheels.

Whether the rover would be sealed and pressurized or open to space like the old rovers was debated, with the non-pressurized route chosen to save weight. But that doesn’t mean that it is going to be wide open, like the LRV’s lawn chair on a slab design. Many of GM’s concept models show it stripped down to basics like this, but Nield showed images of more mature versions that have closure panels for the crew area and for the cargo area that should help keep the insidious moon dust a bay.

When GM finishes its design and construction of the LMVs, the rovers will go to Lockheed Martin in Denver for integration into their landing vehicle and wrapped in a fairing for launch.