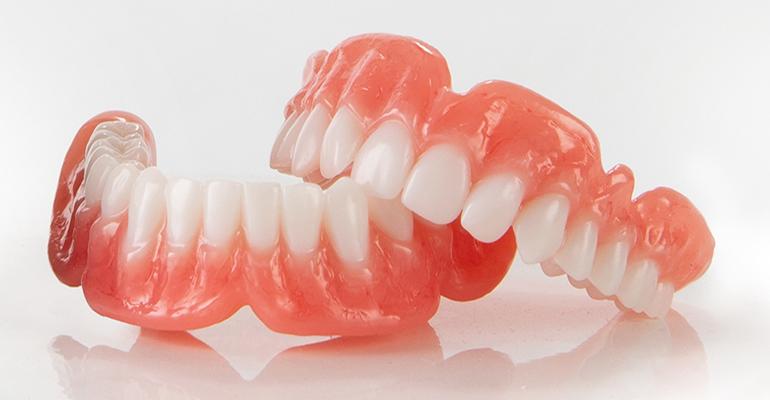 Desktop Health announced today that it has received FDA 510(k) clearance for Flexcera Base, a proprietary resin for use in 3D printing high-quality dental prosthetics. It reportedly improves on existing 3D-printed dentures because of its enhanced fracture resistance and appearance.

“Three years ago, we set out to create a product that addressed the limitations of current 3D-printed dental prosthetics — brittleness and poor aesthetics,” said Michael Jafar, President & CEO of Desktop Health. “The introduction of Flexcera marks the inception of a remarkable new era in dentistry, combining advanced Flexcera science with 3D-printing technology to deliver superior strength, aesthetics, and function for patients.”

The need for dental prosthetics is on the rise, with the global dentures market estimated to reach $3.8 billion by 2027, according to Fortune Business Insights. In the United States alone, more than 36 million people have have no natural teeth, with 90% of them wearing dentures, according to a study from the American College of Prosthodontics cited by Desktop Health. And the American Association of Oral and Maxillofacial Surgeons reports that 69% of adults ages 35 to 44 have lost at least one permanent tooth to an accident, gum disease, a failed root canal, or tooth decay.

Eight dentures can be printed in less than two hours

Flexcera couples the strength of ceramics with long-chain chemistry to ensure optimal denture properties. When used with EnvisionTEC 3D printers, the resin allows dental providers to print up to eight custom Flexcera dentures in less than two hours. The dental prosthetics are three times more resistant to fracture than select competitive resins and are two times more resistant to moisture-caused staining or discoloration than a leading competitive formulation, said Desktop Health in its announcement. The dental products offer lifelike tooth translucency and a natural-looking smile, added the company.

Flexcera is expected to launch commercially in the United States and Canada by the end of June.