Industrial Internet of Things (IIoT) connectivity will be dependent on the drive toward new network architectures and technologies that not only will seamlessly provide advanced capabilities but true device interoperability and security, as well. One networking technology that is developing industry support is time-sensitive networks (TSN).

TSN supporters are combining their efforts through IEEE 802 standards to reduce network latency and improve performance while maintaining interoperability and openness. But their end goal is networks built on time-sensitive capabilities that offer time synchronization, path redundancy for reliability, and assured bounded latency and bandwidth (Gb+).

The AVnu Alliance is a consortium of leading technology companies with a charter to assure an interoperable ecosystem for network applications that need precise timing and low latency. In the IIoT, industrial automation functions such as motion control and process control will have lower latency requirements, but the challenge is how to use timing and scheduling on the network to make sure a wide range of applications will work reliably. Its objective is that TSN will become one of the enablers which will allow Internet of Things connectivity all the way down to end devices on the factory floor. 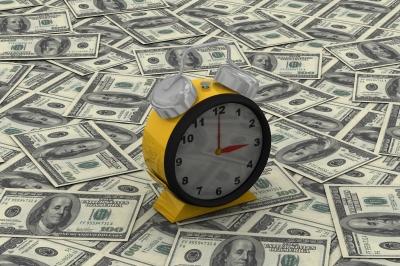 A Common Concept of Time

Todd Walter, chief marketing manager for National Instruments and AVnu Alliance Industrial Segment chair, offers an analogy to illustrate the group’s goals and approach. On Ethernet networks, we can think about functions such as quality of service as paying to get onto a toll road. On the toll road, you expect to get to your destination without getting snarled in traffic. But it doesn’t guarantee the time from door to door because there may be a number of other devices that are also on the tollway.

According to Walter, TSN provides not just access to an express lane. It also tightly coordinates the signals along the way with time. Not only is there the benefit of a priority through the network, TSN can guarantee end-to-end scheduling, so that every light turns green at the right time along the lane for a particular piece of communication.

TSN achieves this using two key technology pieces. The first key fundamental is a consistent concept of time, so that all of the network elements that send packets and receive packets, along with the switches, all share one concept of time. The elements basically have synchronized watches.

The second important piece is a schedule that can be set for all the elements, providing a mechanism for coordinating traffic and, for example, when a particular flow moves through the network. Because there is a common concept of time, all of the flow can be scheduled. These two primary elements assure higher reliability and configuration ability for the individual network pieces.

There are seven IEEE 802 working groups whose projects are timing and synchronization standards and forwarding and queuing tools for scheduling traffic and managing network configurations. Groups include QBV, which is focused on forward and queuing functions, and QCC, which offers a central configuration method and management.

Paul Didier, IoT solutions architect at Cisco, noted, “There are a number of other enhancements that may not be on the same level of maturity, but there is progress being made. If we look at the analogy of a car driving down the street and every light turning green as we get to it, we’re going to do frame preemption.” He explained further, “Imagine a long train or bus crossing in front of you as you get to a light. What we will be able to do is separate that train or bus, let an individual car drive through, and then reconnect the train or bus as it is moving along. To protect the stream in the network, there will be added capabilities, such as ingress policing.” 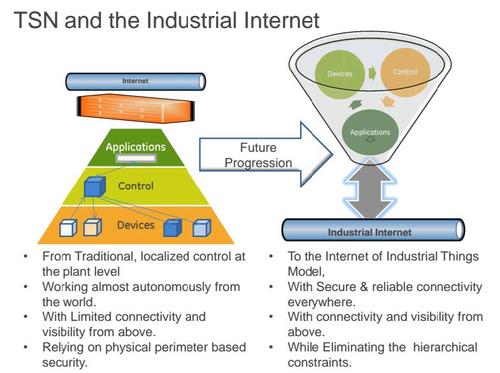 The effect of TSN on the Industrial Internet would be a move from traditional, localized control to an IoT model where there is secure and reliable connectivity, visibility from above, and no more hierarchical constraints.
(Source: AVnu Alliance)

Didier added that all of the standards and working groups have a goal to enhance standard Ethernet for industrial applications, and are taking good ideas from the existing industrial protocols.

Deterministic Ethernet for factory automation and control applications has been widely applied for many years, since the late 1980s. We‘ve had high-speed control over Ethernet for a long time. “But when you dissect those applications and look into the way systems have been implemented, they are typically deployed in isolation,” said Dan Sexton of GE Global Research Labs. “We have taken control networks and segmented them off from other networks in the plant, and mandated that only select traffic is going to run on that wire. The approach has been to engineer the traffic and manage the number of frames and when they occur and tightly lock down the network by limiting other types of traffic.”