Researchers have been exploring unlikely sources for the creation of biofuel. We told you recently how scientists in the UK derived hydrogen from grass. Now biological engineers at Cornell University have developed a way to make the biofuel ethanol through a fermentation process using carbon monoxide.

The team -- led by Ludmilla Aristilde, assistant professor in biological and environmental engineering -- used an anaerobic microbe that feeds on carbon monoxide, which is well known as a common industrial waste gas, to develop ethanol. To do this, they had to understand the cellular strategy of the microbe to spur fermentation of the gas, she said.

“Instead of having the waste go to waste, you make it into something you want,” Aristilde said. “In order to make the microbes do our work, we had to figure out how they work, their metabolism.” 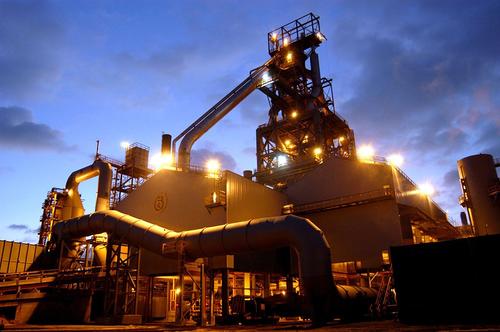 Carbon monoxide is a byproduct of industrial waste gas that comes from industries like the production of steel that occur in plants like this one in the UK.
(Source: Wikipedia Commons)

Aristilde collaborated with her colleague Lars Angenent, professor of biological and environmental engineering, on the project. Key to their work is synthetic gas -- or syngas -- fermentation, a key biotechnological solution as industries look to turn their gaseous waste into ethanol. For their work, the team aimed to understand the physiological nature of the process, they said.

To that end, they discovered that the bacterium Clostridium ljungdahlii responds thermodynamically instead of genetically in the process of tuning favorable enzymatic reactions, feasting on and then fermenting carbon monoxide.

“When I eat food, I get energy out of my food by metabolizing my food,” Aristilde said. “Microbes are the same. In terms of biostructure, the bacterial cells are starving for nutrients, so they are responding metabolically -- which leads to a desired outcome, ethanol production.”

To get the microbe to ferment the carbon monoxide, scientists “bubble it in the growth-medium solution,” where the cells can feed on it, Angenent said. For large-scale application, bioreactors containing these bacterial cells can process carbon monoxide gas emitted as a byproduct of heavy industries, such as the process for coking coal in the production of steel.

“The microbial cells then turn it into ethanol, an organic molecule,” Aristilde said. “And carbon monoxide, an inorganic molecule, turns into something valuable we can use. That’s what makes this special.”

Aristilde, Angenent, and collaborators published a study about their work in the journal, Energy and Environmental Science. The National Science Foundation, among others, supported the research.

END_OF_DOCUMENT_TOKEN_TO_BE_REPLACED

Please wait a moment while we find a poll.
END_OF_DOCUMENT_TOKEN_TO_BE_REPLACED