Siemens is taking its instrumentation and process technology on the road in a 53-foot tractor-trailer that'll tour the US.

Siemens is taking its instrumentation and process technology on the road, John Madden style, outfitting a 53-foot tractor-trailer for a planned three-year roadshow throughout the United States.

Raj Batra, president of the Industry Automation Division for Siemens Industry Inc., cut a ceremonial ribbon Tuesday evening inside the bus. It was parked outside the Disney Yacht Club in Orlando, Fla., where the 2011 Siemens Automation Summit is being held. Some 306 attendees are gathered for a three-day deep dive into the company's wide-ranging portfolio of analytical, process control, and industrial automation technologies. 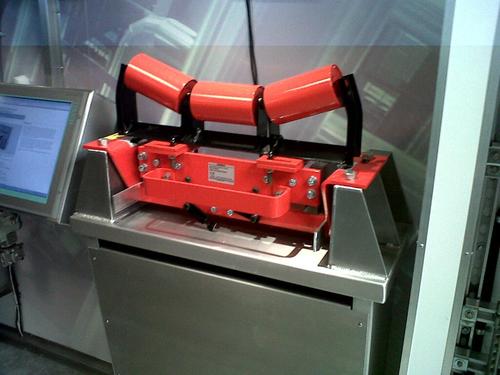 Security was high on the agenda during the technical breakout sessions as the event began on Tuesday. That's not typically a front-and-center issue at such conferences. However, the Stuxnet worm, which took down Iraqi's nuclear processing facility in 2010, has shined a worrisome spotlight on the vulnerabilities at play in plants throughout the world, and engineers are anxious to protect their installations. (I'll be writing more about this in upcoming stories from the conference.)

The ribbon-cutting on the bus, in contrast, had a festive air, as such marketing-oriented events always do. But beneath the pomp, Siemens is attempting to sow some serious technological cross-pollination across a large swath of its customer base.

That would be oil and gas producers, prevalent in the Florida-to-Texas corridor, which the Siemens rig will traverse during its first year on tour. "Oil and gas, along with chemicals, is a very strong market for us for analytical equipment, but not as much for instrumentation," says Doug Duncan, senior marketing strategy manager for process instrumentation and analytics.

Gas analyzers and chromatographs are foundational technologies in that sector, performing compositional analysis and verification as oil is fractionalized into different petroleum products. Less widely deployed, though, is instrumentation to keep constant watch on pressure, temperature, levels, and flows. The sell there is that adding instrumentation could boost quality by keeping processes within tighter tolerances. That, in turn, could potentially increase efficiencies and yields.

Equipment on both sides of that equation was deployed in demo setups throughout the bus. "It's to show our concept of totally integrated automation," Duncan says. Several demos showcased Siemens SIMATIC PCS 7 distributed control systems managing simulated networks of sensors and monitoring equipment via PROFIBUS. 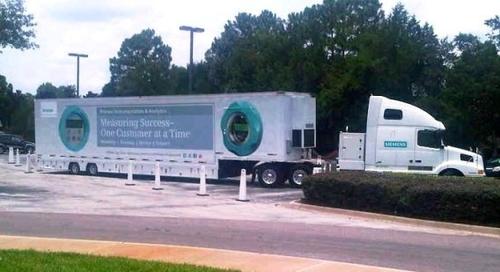 Siemens tech roadshow is fitted inside a 53-foot tractor-trailer.

There's naturally an ounce of self-service in such a showcase -- Siemens has dubbed the bus the "Measuring Success Tour." However, what struck me too was that there's legitimacy to the idea that the more you automate a process, the better you can make it, and thus your final product is improved as well. This is simply the engineering analogue of the business maxim: To manage something, you first need to measure it.

Of course, the impediment towards having sensors up the process-control wazoo has always been cost. You have to have a cut-off point somewhere, or the ROI falls off a cliff. What seems to be happening now, though, is that Moore's Law is becoming as applicable in the industrial realm as it has always been in the pure computer space.

I'll leave you with one example from the bus, which I found kind of cool. Duncan pointed me to a demo of an in situ laser used to analyze smokestack emissions on the fly. (As the gases flow up through a pipe, the laser hits them at 90 degrees.) Primarily, this is for emissions monitoring and for compliance with the Clean Air Act.

Yet such instrumentation can also function as part of the feedback loop for the control of the process itself. Problems in the output gases can provide warning that something's amiss on the input side. It's like in a car, where if tailpipe emissions get out of whack, you know there's something wrong in the combustion cycle, in the form of an overly lean or rich mixture, or a failed EGR valve or oxygen sensor.

It's all about more instrumentation yielding finer-grained quality control over processes. For us Design News types, this stuff is indeed just about the most fun you can have at Disney.