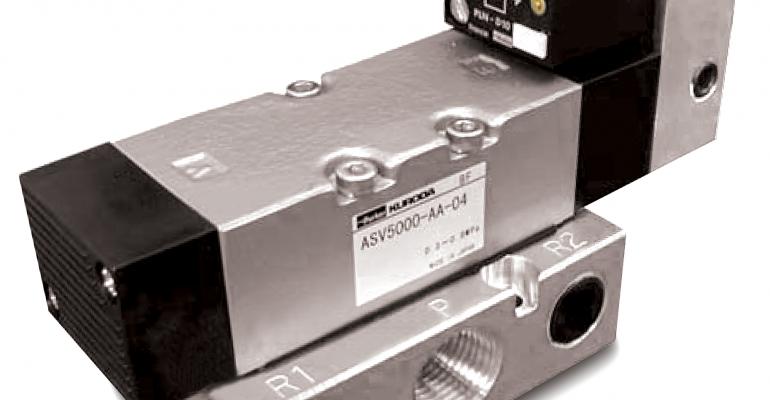 The company’s new Air Saver Unit reportedly cuts air and energy consumption by up to 50%, while offering a more effective way to remove dust, dirt and debris from machined and painted parts. The unit accomplishes that by pulsing the air, instead of remaining in an always-on state. “We use less air than you’d have in a constant-blow application,” Rich McDonnell, market development manager for Parker Hannifin, told Design News. “And then by using the turbulence from the pulsing air, it cleans better, so there’s less processing and greater throughput.”

The Air Saver Unit is essentially a pneumatic valve that couples Parker’s existing Air Pilot technology with spool modifications, enabling it to control the dwell and frequency of the output. The technology was originally developed at the request of a Japanese automaker that wanted to reduce air flow noise on a paint line. Engineers there also discovered, however, that the pulsing air removed dust and debris from car bodies more effectively, while burning about half as much power.

McDonnell attributes Air Saver’s cleaning capabilities to airflow turbulence, saying that it’s similar to using quick broom strokes to clean a garage floor. “If you sweep the floor in one motion, you always leave something behind,” he said. “But if you pulse the broom, you pick up those last bits of debris.”

The technology is being evaluated by the Northwest Energy Efficiency Alliance, a consortium of about 140 utilities in the Pacific Northwest, as a means of reducing power consumption in factories that employ compressed air.

Parker Hannifin expects the product to see us on automated paint lines and in conjunction with machine tools, for swarf removal.

“The energy benefit is obvious,” McDonnell said. “But our customers are also telling us that the productivity benefit is equally important, because the dust and debris is removed more effectively than in a constant-blow application.”

Explore the Smart Manufacturing Revolution! Smart manufacturing is redefining your industry - and it's here to stay. Robots are becoming smarter and complex systems are connecting to provide unprecedented flexibility, insight, and efficiency on the factory floor. It's not a matter of if to adopt, it's when. And you can see it all in perspective at Pacific Design & Manufacturing, Feb. 7-9, 2017, at the Anaheim Convention Center. Register Today!