Researchers at Rice University have developed a combined electrolyte and separator for lithium-ion batteries that won’t have performance issues or catch fire at high temperatures.

One major and dangerous problem with lithium-ion batteries is that they can catch fire when heated to high temperatures, an issue that has caused damage and even death when devices ignited without warning.

Now researchers at Rice University have come up with a solution to this very serious safety problem in the form of a combined electrolyte and separator for rechargeable lithium-ion batteries that supplies energy at usable voltages and in high temperatures. The material is a toothpaste-like composite that is capable of performing well at and withstanding high temperatures without combusting.

The problem with most current lithium-battery chemistries is that they present safety concerns when heated beyond 50C (122F) due to the electrolyte/separator combination used in them, explained Marco-Tulio Rodrigues, a Rice graduate student and one of the authors of a paper on the research published in Advanced Materials Science. 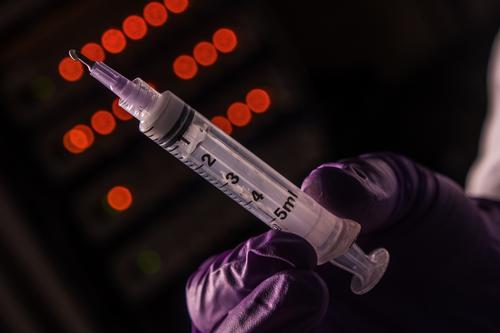 A toothpaste-like composite with hexagonal boron nitride developed by researchers at Rice University is an effective electrolyte and separator in lithium-ion batteries intended for high-temperature applications in a number of industries, including aerospace and oil and gas.
(Source: Jeff Fitlow/Rice University)

“The separator is usually a thin polymer film and may deform at high temperatures, causing a short circuit,” Rodrigues told Design News. “The electrolytes are based on organic solvents, which tend to boil at high temperatures, increasing the internal pressure of the cell. Although commercial batteries implement some protection mechanisms to avoid these problems, any damages to the cell case may potentially lead to ignition, since the electrolyte is also highly flammable.”

The work of the Rice team addresses both the issue of developing a separator that will not cause a short circuit and an electrolyte that doesn’t have the tendency to catch fire, he said.

The batteries made with the components they developed functioned as intended in temperatures of 50C (122F) for more than a month without losing efficiency, according to researchers. Moreover, test batteries consistently operated from room temperature to 150C (302F), setting one of the widest temperature ranges ever reported for such devices, they said.

“These chemicals are basically special salts with a very low melting point, in such a way that they are liquid at room temperatures,” he said. “They are completely nonflammable and they do not evaporate at all until they decompose, which occurs beyond 350C (662F).”

With the electrolyte situation solved, researchers turned their attention to finding a new separator, which they addressed with a material called hexagonal boron nitride, also known as white graphene.

“The role of hexagonal boron nitride is to physically separate the electrodes, thus avoiding a short circuit of the cell, while still absorbing a lot of the electrolyte solution -- basically a lithium salt dissolved in an ionic liquid,” Rodrigues said. “We observed that not only did this mixture make batteries perform really well from room temperature up to 150C, but also that the addition of hexagonal boron nitride made the electrolyte more stable toward oxidation. The importance of this is that it might allow this electrolyte system to be used in combination with cathode materials that can make the batteries work at higher voltages, increasing the energy density.”

In other words, the hexagonal boron nitride not only acted as an extremely thermally and chemically stable holding medium for the iconic liquid, but also improved its properties in an unexpected way, he said.

Applications for the technology are broad, with examples found in the industrial, aerospace, and oil and gas industries, in which there is a need for batteries to operate reliability and safely at high temperatures and in harsh conditions. For example, batteries designed using the electrolyte/separator combination researchers developed could be used in satellites or rover vehicles in space, where the temperature can increase substantially when hit with direct sunlight, Rodrigues said.

“We are maximizing the safety of lithium-ion batteries in such a way that the cells can be fully operational even at very high temperatures,” he told us. “There are no commercial rechargeable batteries able to function at such a wide temperature range and we are very excited about pushing the limits of this battery chemistry.”