The latest version of NI's LabVIEW software maintains its roots while being tailor-made for developing IIoT devices and systems.

National Instruments (NI) kicked off its annual NIWeek showcase with the unveiling of the latest version of its flagship product, LabVIEW, with a particular focus on new features aimed at development in the Industrial Internet of Things (IIoT) space.

The latest version of the system design software, LabVIEW 2016, represents what Eric Starkloff, NI's Executive VP of Global Sales and Marketing, called a push toward a platform approach in his NIWeek keynote on Tuesday. "We are not a test and measurement vendor, we're a platform provider," Starkloff said, pointing to disruptive companies like Google and Apple as examples of the way forward for NI and its customers. "These companies are building software-centric platforms that enable companies to partner in new ways." NI wants LabVIEW to be a part of an ecosystem and the 2016 version is a move away from what the company calls "closed, vendor-defined boxes" to "open, user-defined systems." 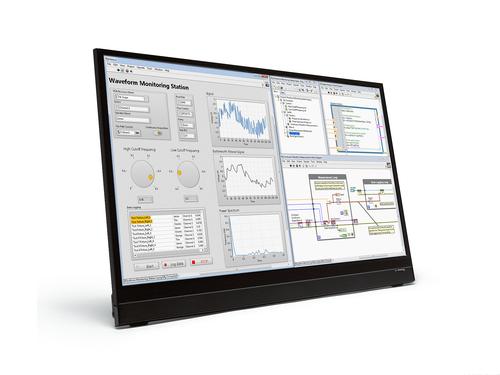 LabVIEW 2016's new channel wire feature is the first new wire to be added to the software in a decade.
(Source: National Instruments)

LabVIEW 2016's most toted feature is its new channel wires -- the first new wire type to be added to LabVIEW in a decade. With channel wires, LabVIEW is now able to take in complex asynchronous communication and reduce it to a single wire. The aim is to simplify communications between parallel sections of code to both improve code reliability and reduce development time, by cutting away the need for developers to create a vast network of queues to pass around information.

During the keynote, Christopher Relf, chief engineer at test solutions provider VI Engineering, said he believes any application that has two or more parallel loops would benefit from the new channel wires. "The new channel wires in LabVIEW 2016 enable us to develop applications even faster by making architectures that are more transferable across domains," he said. "With channel wires, we can set up sophisticated software architectural patterns that natively have multiple sources, without having to create and maintain considerable amounts of custom software in the background."

The new feature is a development that looks directly targeted for IIoT applications, where more and more machines and devices will be sharing an increasingly complex stream of data.

Coupled with this, NI is also augmenting LabVIEW 2016 with 64-bit add-on support for the LabVIEW Control Design and Simulation Module, LabVIEW MathScript Real-Time Module, LabVIEW Unit Test Framework Toolkit, LabVIEW Desktop Execution Trace Toolkit, and LabVIEW VI Analyzer Toolkit. The company has also added support for 500 new devices on top of the 10,000 already supported by LabVIEW. During his presentation Starkloff pointed to a variety of applications for the new LabView ecosystem of products from designing and testing autonmous cars to predictive maintenance.

He also reinforced NI's commitment to ensuring that LabVIEW remains an open platform, by showcasing LabVIEW 2016's new Python Integration Toolkit that lets users pull scripts coded in Python directly into LabVIEW. "We want to ensure a robust community that can share code and best practices," he told the audience.

LabVIEW 2016 is currently available for download and evaluation. Purchasing the new version with an active service contract will also grant access to NI's new Software Technology Preview program that gives users an early look into new software technologies that NI is investing in in various spaces including data analytics, user interface development, and in-product learning.