Family of industrial PCs is preconfigured to work with Aerotech's A3200 motion controller.

One lure of industrial PCs has been the expanding power and value of Intel processors. But on the flip side, with the rapid, frequent changeovers of the processors, there has always been a challenge for those managing product lifecycles of PCs used in industrial control applications.

As part of Design News’ feature coverage of industrial PCs this month, we discovered that a new version of Aerotech’s A3200 motion controller offers an alternative that tracks behind the very latest in Intel processing power but also provides validation and testing for the industrial environment. 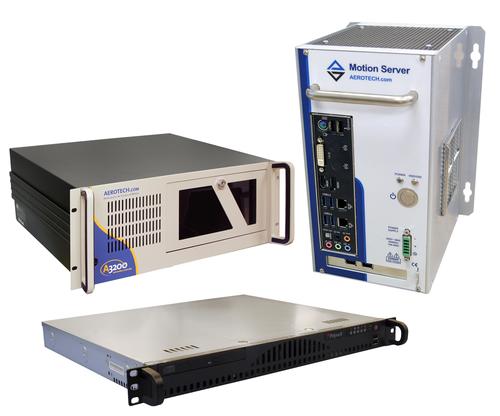 Family of Industrial PCs is preconfigured for use with Aerotech's A3200 motion controller.
(Source: Aerotech)

“Our goal is to try and keep something that’s always increasing in processor speed and capabilities to do more challenging applications without being locked into a fixed platform,” Ron Rekowski, director of product Management at Aerotech, told Design News during a recent interview.

“When we released the product, we were actually one generation behind, using a fourth-generation [Intel Core i5 or i7] processor when the fifth generation was the state-of-the-art. Since that time the sixth-generation has been released, and, in another six months, we’ll take a look and see what makes sense in terms of moving upstream on the processor capabilities.”

Rekowski said Aerotech has had requests from customers who want to get a completely configured solution with everything installed and activated. The user plugs everything out of the box and it works, which led the company down the path of offering pre-configured industrial PCs.

Automation Motion Server products are shipped with a tested and verified installation of the company’s A3200 motion controller operating in a 64-bit Windows operating system. With Automation Motion Server, users apply power, connect the drives, and start developing. This approach eliminates the need for research to guide PC selection, operating system activation and configuration, controller installation, and managing deliveries from multiple vendors.

“We have sold rack-mount PCs in the past, but, with this latest offering, we made the conscious decision to tell our customers that with this combination, the motherboard and the processor are going to be one or two generations removed from whatever the state-of-the-art is in Intel processors,” Rekowski said.

Capturing the Value of IPCs

The value of this approach is that the industrial PC platform itself is PC validated and tested, and Aerotech product engineers are also making informed decisions in terms of the types of processors used and heat dissipation issues in packaging. With a desktop computer configured for gaming or CAD/CAM, the PC is used in a benign environment where there are not a lot of contaminants, worries about filters clogging, and other issues.

But in industrial applications, there is a need to set power consumption, wattage, and heat generation limitations on the types of processors selected, as they will not operate in an air-conditioned-type environment.

The standard Automation Motion Server box has one PCIE slot that is used for the control interface card, and internal expansion is also available using PCIE mini slots. Cabling and interfaces provide an ability to plug in adapters for real-time, Ethernet-based fieldbuses, using a dual RJ45 connector bulkhead to communicate, for example, using EtherCAT, EtherNet/IP, or other buses.

“We’re looking at adding another version of this family that will have two externally accessible PCIE slots, one of which the controller is consuming and another that would be available for users to plug something else inside. That particular box still has an internal PCIE mini expansion site, as well,” Rekowski added.