Programmable logic controllers are beginning to connect beyond the confines of the factory floor, via iPhone Apps that display status data or even control PLCs directly via the over-the-air commands.

Programmable logic controllers are beginning to connect beyond the confines of the factory floor, via iPhone Apps that display status data or even control PLCs directly via over-the-air commands.

Given that Apple's iPhone was introduced in 2007, there are surprisingly few factory automation-related applications currently extant. (There are many mechanical engineering cookbook-style calculation apps.) A Google search on "iPhone PLC" turns up only ScadaMobile, an app for monitoring registers and values in near real-time. It was originally aimed at Omron PLCs when it launched in 2009 but has since been broadened to support Allen-Bradley, Schneider Electric, and several other brands.

One indication that industrial interest may be catching up with the iPhone's potential was a presentation at the recent 2011 Siemens Automation Summit. In a session entitled "Integrating Siemens PLC Data to an iPhone or iPad," Keith Jones, CEO of Prism Systems Inc., detailed the app he built to control the Kooler Ice dispensing machine. 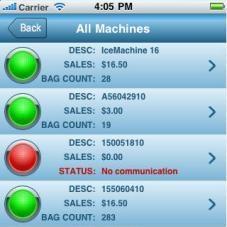 The KoolerIce iPhone App provides an over-the-air alert (red button) when a vending machine in the field needs a service call.

Jones's effort isn't a lab demonstration, but rather a real-world application that's used in the field by Kooler Ice franchisees, who typical own dozens of machines dispersed throughout their respective territories. The app enables them to monitor sales and to know when their various machines need refills. They can even command jammed dispensers to go into a "free" mode, to give away ice as a customer goodwill gesture until a repair crew can be dispatched.

In operation, Jones explained, data from the Siemens SIMATIC S7-1200 micro PLC inside the Kooler Ice vending machine is passed to the iPhone over the phone carrier's cellular network. In software terms, Jones says the S7-1200 becomes the socket server. A socket is essentially the software interface at both ends of a communications connection. Thus, the controller in the ice machine would be the socket server, and the iPhones outfitted with the app would be the clients.

Perhaps one reason there've been so few PLC-related apps stems from the ease, or lack thereof, of interfacing controllers to iPhone functionality. "Siemens has full exposure to sockets for a sub-$500 S7-1200 controller and a $100 wireless access point," Jones says.

On the programming front, Jones had assistance from several colleagues at Prism Systems. Jones says he's been writing iPhone apps from several years: "I did my first app at night. I had a big time."

Jones particularly enjoyed working with Apple's Xcode software development environment. However, he noted that there's a definite learning curve involved in creating iPhone apps. "There's not a huge market yet, and there aren't a lot of systems integrators doing this, because it's difficult. We tackled the KoolerIce App as a test." 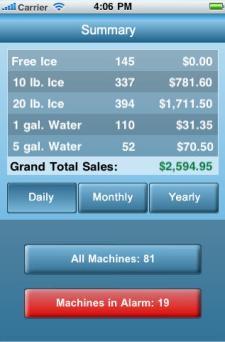 The KoolerIce App costs $19.99 on the iTunes store, and will only work for registered users of the Kooler Ice Vending Portal Service. That ability to limit an industrial application to authorized users is important, as security concerns rise among engineers and plant operations personnel.