Researchers at Lawrence Livermore National Laboratory have published two physics-based models for the selective laser melting (SLM) metals additive manufacturing process, so engineers can understand how it works at the powder and scales, and develop better parts with less trial and error.

In several different surveys (including ours), engineers have said they want to use 3D printing for end-production, and they want to use it for making metal parts. The main hangups have been the high cost of machines and/or printing services.

But another barrier is the doubts of engineers that additive manufacturing (AM) processes can produce components with good enough mechanical properties. That's in spite of successful hot-firing tests by NASA and Aerojet Rocketdyne on rocket engine parts, the US Air Force's confidence in the ability of Optomec's LENS 3D metal printing technology to repair aerospace components, the use of 3D printing for making custom metal implants, and GE Aviation's notorious mass production plans for metals parts in its LEAP (Leading Edge Aviation Propulsion) Turbofan jet engine. 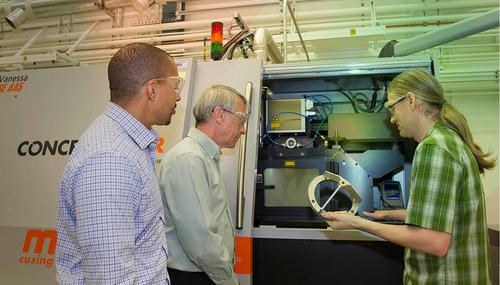 We get it: engineers are skeptical by nature. Lawrence Livermore National Laboratory (LLNL) gets it, too. That's why researchers there decided to create two physics-based models for a commonly used metals AM process -- selective laser melting (SLM) -- to describe exactly how it works at multiple scales.

LLNL should know: the lab has been investigating 3D printing and AM for some time, has its own facility for metals AM, and has done major work on four additive micro-manufacturing techniques, including one we reported that resulted in a new class of metamaterials.

A lack of confidence in the finished parts on the part of engineers can be overcome with a combination of physics-based modeling and high-performance computing to determine the optimal parameters for building each part. "If we want to put parts into critical applications, they have to meet quality criteria," said King in a press release. "Our project is focused on developing a science-based understanding of the additive manufacturing process to build confidence in the quality of parts."

The two models LLNL developed for validating the SLM process -- a powder model and a part-scale model -- are described in an open access article in the January issue of Applied Physics Reviews. The ability to move from prototypes to end-production of metal parts for mission-critical applications can only be accomplished by a thorough, fundamental understanding of the complex physics behind the process, says the article, authored by Wayne King, director of LLNL's Accelerated Certification of Additively Manufactured Metals (ACAMM) initiative, and his team.

Researchers say the powder model -- which addresses the formation, evolution and solidification of the melt pool -- could be used to better understand how laser power, beam size, speed, and shape affect different types of metals and to develop parameters for new materials. This model can also be used to understand the major physical processes in the interaction between laser-powder interaction, guiding future improvements to the SLM process.

The part-scale model simulates 3D printing full-scale parts, and calculates the effects of heat and stress produced from specific laser process parameters and metal type. This model could improve predictions of deformation and stresses that occur during printing, which can lead to part failures. It could also help improve quality, by eliminating much of the guesswork involved in designing new parts.

The team said this ability to model fabrication lets engineers see the part's aggregate behavior so they can build in compensations. Adding data-mining technologies and uncertainty analyses to these models could help engineers better optimize their designs, with fewer "make and break" experiments required to figure out why failures occur.

You can find out more about the models, and the ACAMM initiative, here.