Robot-based intelligent bin picking even for the most complex objects has been made faster, safer, and easier by leveraging 3D vision technology. New sensors not only provide fast part detection and recognition of complex part geometries, the vision systems also integrate intelligent pick planning and collision monitoring. Fully supporting automated separation of unsorted parts and providing efficient operation and shorter cycle times, one PC can be used to control multiple sensors in these systems.

Random bin picking is the target application for the ShapeScan3D system, using industrial cameras and a laser in conjunction with an integrated set of software tools that ISRA Vision developed using an in-house team.

“The goal has been to generate a solution where both expert and non-experts can easily install and use the software in a very short time,” said Tolga Sarraf, sales manager of 3D machine vision for ISRA Vision. 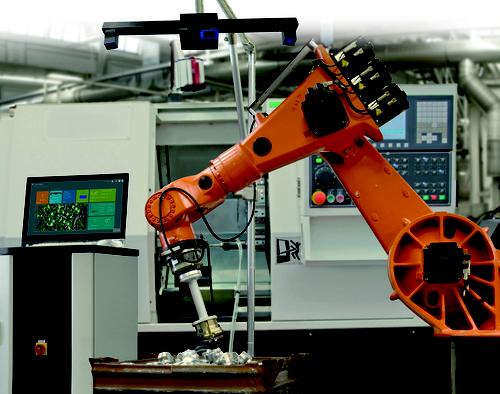 The scanner in the system consists of two cameras and a line laser. The standard scanner has three parallel lines which are used to scan the surface, but if the application has a short cycle time requirement, the number of lines can be increased to seven. Using seven lines enables scanning of the surface in under two seconds.

After the 3D point cloud is generated, it is loaded into software tools and undergoes a three-part process, the first of which is part detection by matching a 3D cut or CAD model of the part with the point cloud to identify the position of the part. Part recognition is followed by path planning that determines how the robot picker has to move to pick parts. The third step is collision avoidance, achieved by checking the part and the gripper of the robot and coordinating the process of picking the part out of the container without colliding into the box. The software provides one graphical user interface and an integrated set of tools to complete these tasks.

“The whole package includes the software, the hardware, the cable, and a calibration mark that is used to calibrate the scanner and the robot system,” Sarraf said. “But a key advantage is that we also provide the robot communication protocol. For different robots, the customer or the robot system integrator will normally have to implement the communication protocol [over] several days on their own to communicate with the robot controller, but ISRA Vision provides this readily and cost-free.”

The graphical user interface is also a very important aspect of the system. It looks and operates in a very similar way to Windows 10 and Microsoft Surface. Users can use the touch interface, which eliminates the need for a keyboard or a mouse. Sarraf said the process is intuitive and the training time to get acclimated with the software is less than an hour, adding that the typical user can learn and use it without help.